How was the metric system independently rediscovered by the four races and universally adopted as standard after the EVE gate collapse?

That’s a really good question. And one that I too would like answered.

Right now in my head, I would say “metric” is just a place holder term.

Otherwise handwavium and sweep it under the rug?

I find it easier to believe that the metric system survived (not much to improve to it anyway) than that the four races are all still talking in one of the same languages as existed back then.

Maybe it’s all just automatically translated, including the metric system, so that we understand eachother better?

Maybe it’s all just a translation, including the metric system?

I’ve tended to view it in a similar way.
A common agreed language to allow the Empires to communicate and a common measurement system to ease the sharing of equipment and services.

Even within an Empire a similar problem exists. Different worlds, with different residual populations, will have their own languages, measurements and cultures that need to be folded in not an Empire.
I suspect there is an analogy to the way English (proper English) was influenced by Empire. From the adoption into English of local language (bangle, dinghy, cot, shampoo - all from India) or where an English variant becomes adopted as the local language (such as that weird sort of C17th Cornish accented English they speak on the other side of the Atlantic).
English is a weird pot-stew of a language.

Metric has a lot of advantages - very few odd proportional constants between values. This helps a lot when building systems or trying to avoid errors interworking systems.
The old “joke” about Imperial measurement getting man to the moon is wrong: The Apollo Guidance Computers worked internally in metric and only converted at the display for the crew. You save a lot of storage not having all the weird and error prone constants in the calculations.
You can imagine a similar coherent unit system existing in the Eve universe.

So Metric may have survived the EVE gate collapse? Cool!

More likely: there will be a scientifically useful set of common units that get adopted for business between the Empires. For us poor humans trying to understand New Eden we’ll assume the interface translates it to commonly understood and used measures.

Similarly: I’m fairly sure I don’t understand Amarrian, but I’ll live with the translation service provided for me!

I like that idea. It would indeed be confusing if the game displayed text in the language actually spoken by the empires, like Amarrian or Caldari.

Correctamundo. There’s thousands of languages just on current day Earth, there’s probably hundreds of thousands, possibly millions in New Eden, though maybe a few hundred of those get any widespread use. 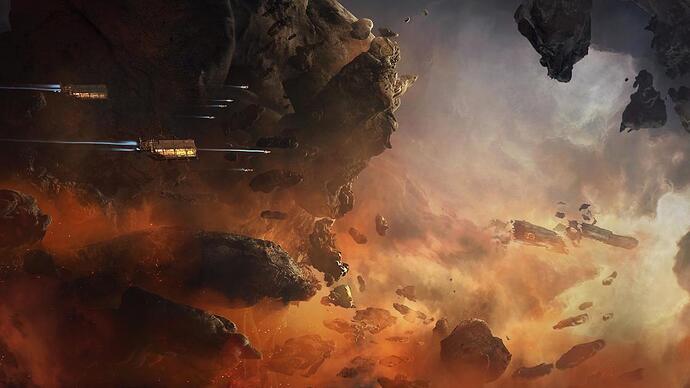 The most obvious problem in inter-racial communication is the language difference. All the major races in EVE speak their own language and all attempts to make one the lingua franca have failed because of stubbornness over accepting any one language...

As for the OP’s question, it is very probably one of the many things agreed upon at the very latest during the Yoiul Conference (in which Universal Time was also decided), though I find it far more likely that metric measurements were rediscovered (if they ever were truly totally lost) individually and independently far earlier in all the spacefaring cultures of New Eden, though also very likely not called “metric” in any of them.

Problem of an imperfect simulation. There’s some kind of interstellar measurement unit, probably standarized by Concord. The game calls it a kilometer because it would be cumbersome to use some fantasy unit, and it would be too difficult to readily understand scale - which is already a problem enough in Eve.

The standardized system is probably close enough to metric that the game uses metric as a conceit. That doesn’t mean the actual unit in universe is called or identical with a modern kilometer. (Though it could be, for whatever reason.)

Same reason other scifi/fantasy settings far removed from Earth refer to things like parsecs or lightyears.

I think we see this same effect in the naming of some ships, like the Loki or Tengu, which are named after things not quite the Earth mythological equivalent but maybe “close enough” that the game “translates” them that way.