I can’t find a particular toon on zKillboard. I know he might not have set up the API, but shouldn’t there be intel anyways? At least one of his victims should have had it.

I think I remember @Scipio_Artelius saying that zkill only shows ~50% of all kills or something.

Is Hisec ganking good for the game? General Discussion

The simplest, blunt approach to seeing how much zkillboard is reflective or not of the total loss within the game is to compare the stats zkill provide, with the ESI stats. That is, zkillboard publishes the number of kills added in the last hour: [kills_this_hour] At the same time, the ESI provides a cached value of kills by system: https://esi.evetech.net/latest/universe/system_kills/?datasource=tranquility The 2 will never line up perfectly, which is why it’s a blunt estimate, but just t…

I didn’t post on it for the longest LOL.

I think I remember @Scipio_Artelius saying that zkill only shows ~50% of all kills or something.

So just tracking those 2 figures at set periods and then plotting it: 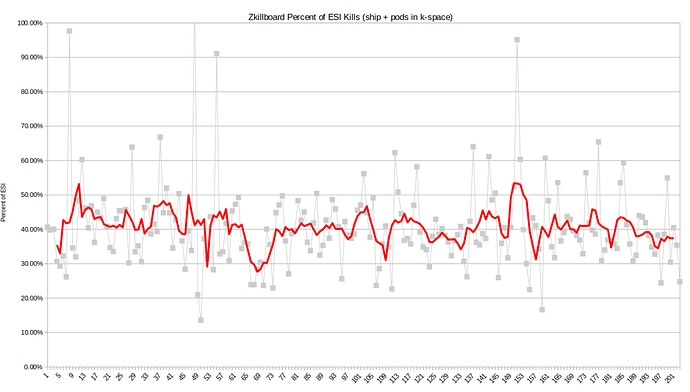 * the spikes where zkill is recording close to or >100% of the ESI value is where zkill is running batch jobs to pull prior kills (eg. new characters, corps or alliances added, periodic collection of war losses, etc.)

Given that zkill also includes jspace where the ESI doesn’t, the percentage of loss that makes it’s way to zkill is slightly lower that the above graph, with the mean in the above graph being slightly above 40%.

Even if only 1/7 victims posted his losses, why can’t I find any of them? Three of my corpmates vaguely kind of remember the guy saying they think someone with a similar sounding name, possibly the same guy, just comes by in an Occator, Venture, or Orca through low sec now and then for the past 3 years. One of them said to ignore him if he’s in local as he’s a non-entity and an older player said never ignore local, every grey can be a threat and besides even if the guy they remembered really was a non entity, none were 100% sure we were talking about the same guy I mentioned since they weren’t 100% sure they remembered his name correctly.

Even if only 1/7 victims posted his losses, why can’t I find any of them?

Maybe none of them are posting. If they were, they’d show.

I wish one of them would post… I like to get intel on people who frequencly pass thorugh my normal reas so I know if they hunt people or not.

Very unlikely this is a problem, because if missing killmails were a thing, a lot of the games players would be raising complaints.

This is a bit of a problem because I want to know if I see him in local and should think “just through traffic like last week” or “uh oh, I need to align”

A couple of things.

Firstly, are you sure you have the name spelt correctly? For example, Klondike and K1ondike would be different characters, but in game, will look very similar (since 1 looks like an l - and there are other examples).

That aside, hunters are unlikely to be missing from zkillboard (especially in the areas you play in lowsec). They lose ships too and at some point, someone will have been on zkill.

Even in that case though, a character with no killboard isn’t necessarily innocent either. They could be scouts.

In lowsec, local knowledge built over time is the best filter you can develop when there is no killboard for a particular character.