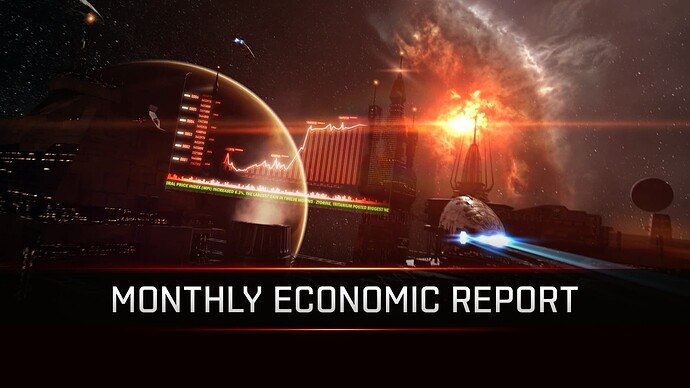 The Monthly Economic Report for September is ready for your enjoyment.

Thank you.
Can’t wait to read the comments.

If you have downloaded the data, there’s a few lines in the sheets in the downloadable data that were not pulled correctly.

The correct one is being worked on and I’ll let you know when the new one becomes available to download.

I don’t know about ‘dying’, but it sure ain’t in a good place. ISK velocity continues to fall, just as soon as you remove PLEX from the mix. And you should, because PLEX got hit with shenanigans last month. CCP’s weekend of ‘you only need 300 PLEX for a month of Omega’ came just before the end-of-quarter, and if you pay attention to the PA quarterly investor calls, it’s not hard to see why: internal accounting holds PLEX as deferred payment.

CCP can’t count those PLEX as ‘earnings’ until they get used. So they were openly trying to clear some of those deferments off their books and show rosier-than-actual ‘earnings’ (because the money that created those PLEX was already long-since moved through CCP’s accounts, let’s face it).

At the same time, that ‘deal’ caused a spike in demand of an already overpriced commodity. PLEX prices had been fairly consistent at ~3M each for a long time, then after the subscription price increase, began a steady rise as people began moving ISK around to keep their accounts omega’d without paying CCP actual $$. In a lot of cases, this is people who want to subscribe, but are waiting for CCP to actually release any of the stuff we were told was coming back at the ‘wait for FanFest, it’ll totally be worth it’ stage six months ago.

Into that climb, we add the 300-PLEX weekend, and bam. PLEX shoots up even more that weekend, at one point hitting 8M/PLEX, close to 300% the pre-pricehike normal.

So is it any wonder that, when PLEX are added into the figures, there’s a significant uptick in ISK velocity that completely vanishes without PLEX?

Don’t get me wrong, not on the ‘EVE is dying’ train here, but it’s way too early to go thinking anything’s actually in recovery yet.

Apart from the “Train” cause that left the station a year ago… Along with many long term players onboard.

Funnily enough, and I’m sure it’s off topic here, but I can’t remember the last update from Team Security… And since Faction warfare Bot’s were one of their prime targets, it would be interesting to see how things have changed cause for me, bot’s are out the window these days - along with most of the players…

8m/Plex tho - Hmmm… I see 4.6 or so tops but I am no Exhell expert and even if it did hit that mark, I’l say that was market manipulation… Even Noob are not that stoopid !

Nah, it was right at the top of the spike, and there’s a good chance those PLEX never actually sold. But it was definitely trading well above 6 for a few hours.

I saw it above 7 for a bit ( started right as the deal was hitting, so there was a lot of talk about it going on at the time). Highest figure I saw it listed for was 7.5m and I’ve heard that it was selling at that price, but can’t say for sure how well. it stayed above 5 million for a good few days after the sale ended too, but has dropped below that now and is looking like it’ll probably stabilise back near its usual price point from before the deal was on.

Except it’s ‘usual price point’ wasn’t a price point. It was a steadily-rising trend. It slowed some at the beginning of September, but we’ll have to see if it resumes its rise.

Things are getting out of hand again . Nul sec is destroying the economy .We need t2 manufacture update the cost of t2 ships are too low so faction ships can be used again , triple the price of t2 ships . Loot from npc must go people melting loot to get minerals are hitting the mining . Oversheer need to go sap nul blocks print isk from escalations too easy .And the escalation thing is also hurting the economy escalation should be moved to wh space witch is dangerous as random anomaly spawns make . Rat we support you finish your work

If “The Forge” is always #1 on the list, one has to wonder just how much of the Monthly Destruction Value comes from newbies dying in the tutorial zones, especially Uitra. 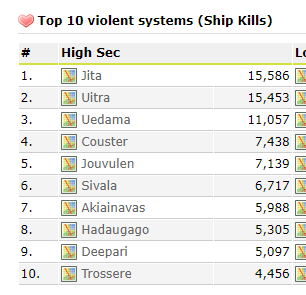 @CCP_Paragon Let’s seperate Jita into its own “virtual” region for the MER in the future, what do you think?

You know what’s crazy? That there are null sec regions with 0 market activity according to the MER. And their number is growing, from July to September the number has gone up from 3 to 6. This must be very healthy.

You know what’s crazy? That there are null sec regions with 0 market activity according to the MER.

It’s really not that crazy, though. Take, for example, Outer Passage:

It’s a minimum of 3-4 jumps in a JF (GARPA tells me 4, but I might be choosing my destination system poorly) from Jita to OP. According to the trade balance numbers, OP had a trade balance of 1.9T net imports. Only 11B got mined, nothing got built, and there was only 34B in ratting last month. So what’s the story here?

Well, TEST recently left. They moved out in August, to go shoot Brave on the orders of their leash-holders to help out the guys they’re totally not still PAPI-mates with in FRT. Then one of the rental holding alliances for PandaFam took over that space, and in the middle of September, it got to where they could install jump bridges and cyno jammers. Once that critical infrastructure’s installed, they’ll have better luck renting the region out—and there’s some sign they might be starting to, what with the 4000+ NPC kills in 7F-2FB in the past 24h.

They need to get the ADMs up, though, so they can install the IHUB upgrades… which ain’t cheap, and there aren’t a huge number of actual alliance-level revenue sources in EVE right now. So it’s likely that they’re gonna take it slow and work on 1-2 systems per constellation, then once there are renters installed, the process will accelerate.

At the same time, though… it’s entirely likely those renters will be provided with a single central market system someplace more directly under FRT or Horde control. And they won’t be allowed to establish their own market fortizars in OP, because there is no way the landlords are going to let any of their serfs keep the market fee ISK for themselves.

So no market in OP, at least until there’s enough of a return on the investment for the landlords to put one in and keep it fueled. Until then, expect the serfs to need to ship straight from Jita, or buy in like, Perrigen Falls.

Yes, and in the southeast the regions were war zones. However, that has not completely stopped market activity in such regions in the past.

It has when the structures were purged. Back when they were Outposts that couldn’t be destroyed, you could continue market activity uninterrupted. Now, though, glassing a region means no markets until a new one gets put in, and that’s a much lower priority than the military infrastructure to defend that region, if it’s not someplace you’re going to move into.

Put bluntly: rental empires lead to these large gaps in market activity. If someone’s conquering to move in, they need a market up and running fairly quickly. If someone’s just taking space to rent it out, they don’t want localized markets until they know they can make money off of it.

Just one more way rental empires are bad for the game.

I don’t think it has anything to do with renting. The space couldn’t be held by other groups anyway because it’s so remote. Even when TEST lived there in OP, market activity was minimal. Rental empires also have not led to market gaps like this before, even after structures were a thing. Regions with 0 market activity are a new phenomenon, at least if you look at the MER.

Have you seen how bad ratting in null is… its terrible income. I would love to see how your printing isk in null.

The space absolutely could be held by other groups, because it has been. TEST was given OP when they fled Catch and the Southeast. How do you think it could be given to them if nobody could hold it?

As for rental empires not causing this kind of 0-ing out before… that’s because it’s been a long time since renter space was actually glassed. So there was plenty of infrastructure that just changed hands, as the big rental empires have just changed labels over the years. The current PAPI rental empire is the same one that’s been running most of the renter space since at least 2012. And most of those regions have been extremely stable, with just the holding corp/alliance changing, and market structures getting transferred, not blown up and replaced.

When the big null blocs have gone to war in the past, they’ve been aimed at one another. When we glassed Tribute, we didn’t go looking to kill NCdot’s rental space, we went for them. It wouuld have been pointless to go after the renters, because it wouldn’t have impaired PanFam’s military capabilities at all. The renters would have melted away and then returned as soon as we were gone. Destroying NCdot’s military infrastructure in Tribute, they still came back eventually, but they were wary enough of coming back into our range that other groups could try to flourish there for a bit. Try doing that in rental space—which is generally behind the defended regions—and you’ve got to go through them, over-extend your lines and… then probably get cut off and shredded.

The collapse of the Legacy Coalition’s defensive infrastructure, though, left all of the SE rental regions open to be burned. It left FiRe’s space open to getting glassed and then held that way for a couple of months. Feyth and Impass fall into that category. Cache is PanFam, and they do their market trading in the Horde and FRT hubs. Paragon Soul got glassed with the Legacy withdrawal, and has been given to Red Alliance, but they’re still getting their infrastructure set back up because, y’know, out of game issues. Oasa’s the only one that’s even slightly surprising, but again, renters, so they’re probably also being told ‘you’ll use the main hubs outside of your region and pay your masters’ market taxes’.

Nul sec is destroying the economy .We need t2 manufacture update the cost of t2 ships are too low so faction ships can be used again , triple the price of t2 ships .

You know CCP Rattati specifically made changes to make faction ships more expensive, right? The guy you’re cheering on is why the problem you’re complaining about exists.

Very little as their ships are free.