Decided not to run this year, just too much time. Maybe another day! Thanks to everyone who supported me! 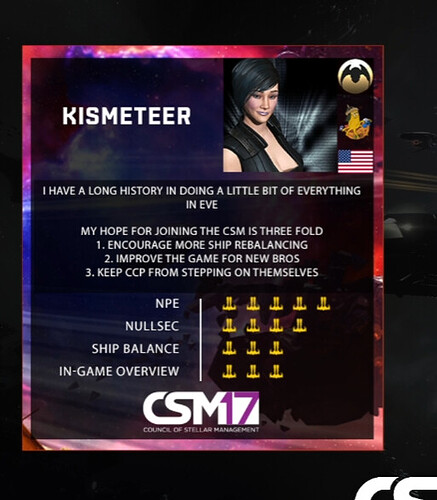 image512×585 71.1 KB
My name is Kismeteer in game and a 47 year old 6’5" dude near Chicago in real life. I’m a CEO of a corp inside Pandemic Horde, previously a director in Goonwaffe, before that a high sec mission runner, before that a Dusk and Dawn renter called FLA, and been playing since the end of 2005, mostly in null sec. I enjoy the big fights. I really like helping new players.

I have a long history in doing a little bit of everything in eve. I know null sec well, I know pos/sov warfare, I know how to FCing (but struggle with tunnel vision and talking too much), I know dictoring well, I have a checkered history where I burned a dread cache that I helped move, and I enjoy talking about this game. Maybe too much. I’m overly helpful, even when it’s unwanted. And I’m a very fast typer. I like solving problems. Check my in-game bio for a video of me at Eve Vegas.

My hope for joining the CSM is three fold:

I look forward to people supporting my candidacy, both inside my current alliance, Pandemic Horde, and those who know me from my multiple times at Eve Vegas and Fanfest. Which you might remember me as ‘The Dude’ or multiple other Big Lebowski characters.

I really like this game. Let’s make it better.

Thinking about some of the changes I think that would be helpful for newbies, I’ve come up with a few more ideas.

There are so many small changes that we all do the first time we setup a new client. I think we should spend the effort on giving pilots easy ways to configure clients, especially with the new interface coming.

Booking CSM 17 interviews on behalf of Ashterothi Scheduling for this weekend. Let us know if you’re available.

How do you feel about the current state of ansiblex jump gates? Is there anything you would want to change about them?

I will have to wait to see how the new changes they’ve done associated with not being able to instantly drop a new one, honestly. I’m fine with the power projection as it exists, it’s either this or people are doing a lot of wormhole probing. I think if you really wanted to make it ‘interesting’, just allow everyone to use them.

Then roaming can get wild.

An example of the changes I would advocate. Assault Frigates are unbalanced, everyone flies one or two of them, and it’s easy to see.

So, buff the lesser used ones, minor number changes. And if those number changes are too much, change them again more frequently.

Granted, zkill isn’t everything because the hawk is used heavily inside abyssals. But buffing minor numbers on the ishkur, vengence, hawk, enyo? I can’t even remember the last time I saw a vengeance flown honestly.

The Vengeance is one of my favorite ships, the first T2 ship that I ever made as a training goal, and I have always been disappointed to see how it performs compared to the others. I would definitely like to see an assault frigate rebalance.

You’ve given a couple examples on ships/classes you’d want to rebalance, but every other ship in the game as well as what you think of them is a black box. Who knows what you’d end up doing to the other 100+ ships in the game. That’s a risk few people would be blind enough to take on. Does this extend to capital ships, or will you just focus on subcapital ships? Both? Do you think ship balance is a critical issue in the game? Give examples of ships/classes you think are in a good spot balance-wise.

Do you think ship balance is a critical issue in the game?

100% ship balance is critical. Without balance, everyone flies the same goddamn thing, see also muninns and eagles. Granted, when it comes to major fleet battles, it’s good to go slow. But we’ve been going how long without a tune on multiple classes.

https://www.reddit.com/r/Eve/comments/ls7o73/ccpthanks_ship_balancing_done_right_dictors_2020/ is an example of a tune that went well. All the dictors are useful to someone now. Honest, most of the HACs are in a good place, just need to buff the deimos and the sacrilege, the two weakest ones.

I think Assault Frigates are easy and low risk, it’s easy to see which ones are struggling. I think the Attack Battlecruisers are a good target. I think the t1 cruisers are wide open in making things better, utility wise. The Bellicose and the Celestis could use some love.

And the problem isn’t that ‘oh it’s too difficult’. It’s a problem of rapid prototyping. Change a number one day, say we’ll tune in a week. Get feedback. Tune. Wait a week. Do another group. It’s minor numbers, and yes some people might over/under produce for demand, but if we get to the point where ALL the ships in the game are useful, that’s better than what we have now. Where some ships are never going to be chosen to fly.

the inquisitor, for instance, who would chose that. Inquisitor | Ship | zKillboard 1,143 on zkill recent. There are AT ships that have higher ranks. note, it has remote armor reps but it is slow and hard to fit, and hard to get on killmails with for sure. but still. 62 losses last month. versus breacher, 180 on zkill, with 524 losses. easy tune.

Buff crappy ships. If they get over buffed, tune them again. It worked great with interdictors. keep doing it!

Good luck on your run.
You have my vote

Thank you! I have a small chance but I can only see positives from getting some of these ideas exposed.

Heyo!
You have my vote, Good Luck!

Couple videos talking about the things I care about

I know it was a good suggestion for that little popup question to ask a pilot what do they want to do today.

I personally like to turn anything like that off and even if when asked on the log in I don’t wish to be asked such things when loggin into the game.

Other than the above on your Interview, I think you did okay.

I will be sure to remember to look for your Campaign on the list next time @Kismeteer as I still think your interview was okay though for this year.

If you read the OP, they dropped out