Personally? I preferred the -3 for the wcs. Still trying to push that one through.

Why? I can’t see any reason we need that. A hauler is already almost uncatchable. Before the wcs change many did not even try to catch one as they are always full of wcs. Now, you can at least try to catch one again.

Having -3 won’t change what will happen in a ‘proper’ gatecamp but it will provide an I-win-button for a 1vs1 scenario.

Personally? I preferred the -3 for the wcs. Still trying to push that one through.

Could you push for faction wcs to be 3 points?

That would mirror the way scram strength works, gives players an option to risk more for more safety and makes the whole tackle versus wcs less predictable for both sides with variety in both tackle strength and warp core strength.

That would mirror the way scram strength works

No, you can fit multiple tackle modules but only one warp core stabiliser

I fly in a Astero with 3 Warp Core Stabs, cause I’m lazy. Get ganked time to time, but now my Astero has only -2 Warp Strength against single Navi Scrammer +3 which cost 50 mil to fit to some cheap ass ship with can tank 5 Light drones. Or even worse, equip both the scrammer and disruptor for 20k ISK, fit it to fast locker and I’m in a new clone. It kinda feels like flying in a wreck all day exploring. Would be cool if you had included better Faction Warp Core stabs with -3 strength and even General ones.
For my other accounts Cheetach explorer the change is cool, these Sabres would lock and kill in approx. 10 seconds inside bubble and nothing can be done, have lost 5 of them inside bubble in past month just wondering around.
Also when will the Directional Scan be fixed, pressing V button all day exploring has kinda ruined my keyboard.

If you pay attention to your local, dscan and overview you have plenty time to warp off when someone decloaks right beside you, because they have a targeting delay for uncloaking of at least 5 seconds.

The only ship that doesn’t have such a delay is a bomber but (a) you’re talking about a ship with light drones which is not a bomber and (b) if you’re flying a well fit Astero no bomber would ever dare to engage you as they will lose that fight.

And about the directional scanner: what do you think should be fixed about it? I’ve heard people rebind it to spacebar to save their V key.

And so it will be. They will say something about the fact that an industrial person is prestigious, but the availability of this occupation deprives people of a decent income. And they will kill the extraction of resources as a source of income. Because players should be given to experienced pvp players, not have fun

No, you can fit multiple tackle modules but only one warp core stabiliser

Not what I was talking about.

Faction scrams have +3 warp disrupt strength, non-faction have +2. It would be nice if the warp core stabilizers could mirror that behaviour by having +2 strength for the Tech 1, 2 and meta modules and having +3 strength for the faction WCS.

So now all my mining ships will die to small gangs or even individual gankers. The 15 secs that the stupid thing lasts for isn’t long enough to warp away with most ships. We need bonuses to warp stabs on mining and transport ships. Great we have a new crap highslot modual but unless I’m missunderstanding this interdiction nullifier only effects nullsec stuff like inderdiction spheres and mobile warp disruptors. I need higher than 2 warp strength to protect against the assholes in high sec than gank people with warp scramblers. This nerf is just a bs way to get people ganked so they need to buy more Plex. If this type of shady bs continues I’m gonna stop playing. And you all should too. There just gonna keep making it easier for pirates to gank you in highsec so you have to buy Plex. I won’t be surprised if there nerf Concord too. That’ll be the next update I bet. Instead of fixing this bs by giving us real ship bonuses for these things there gonna do something like nerf Concord or buff warp scramblers

If the devs have any intentions of fixing this whatsoever they will give all mining and industrial ships a passive warp core bonus and a bonus to warp stab duration for all industrial and mining ships that take more than 15 secs to warp. Untill this is done no mining class ship will be safe from highsec gankers. +2 isn’t enough to protect against most highsec gankers and everything bigger than a frigate takes too long to warp. The old modual saved my life a few times. The new modual isn’t even worth fitting

In don’t use stabs and haven’t tried the new ones but If you activate the new ones after being tackled does it break the tackle? (Given enough warp strength) If so then the use case would be to align first then only activate the stab when your aligned enough to actually warp, then immediately warp after. 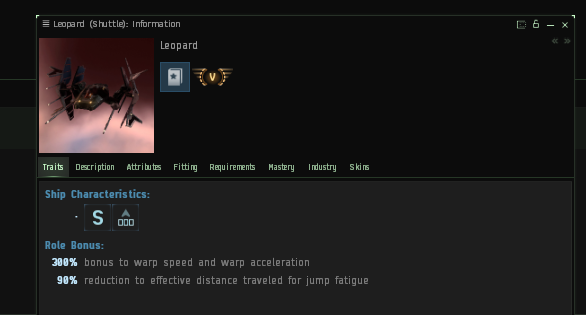 All shuttles are immune, right …
this patch wasn’t rushed at all, right ccp?

In don’t use stabs and haven’t tried the new ones but If you activate the new ones after being tackled does it break the tackle? (Given enough warp strength) If so then the use case would be to align first then only activate the stab when your aligned enough to actually warp, then immediately warp after.

yes . if you are scrambled by +2 strength max and you activate your WCS you can warp.

one GTFO module worth 3 old modules while only carrying the drawbacks of one single is a massive buff!

You realise this module already had quite a few drawbacks that remained with the change, and that the new ones carry even more drawbacks than before ? The new ones being the obvious short activation duration and long cooldown, and the drones -50% to bandwith. And don’t forget the drawback of only being able to fit one…

Since they rarely attack alone (because they like to be safe when they attack defenseless miners/hauleurs), they’ll simply need to have another scram. They don’t have the drawback of only being able to have one (if they had to man it solo)

Goddamit, my favorite ships are obsolete…

how will they know if they have succeeded or failed?

If player dissatisfaction goes up and older people leave faster than new people discovering the learning curve from hell they will know that they have achieved their goals.
CCP likes anger, hate, violence, destruction and misery, this is what they get off on.
Somehow they escaped notice when they were children and went on to create a video game instead of whatever it is people like this normally do when no one is looking. Usually making headlines, I suppose.

I have one!
I love it, but for some reason no one ever attacks me when I’m flying it.