I don’t know. He seemed very shaken, in a way that didn’t suggest mutual attraction to me, when you, to phrase this politely, exchanged words with him at the writing contest awards gala.

But you’re stating the data is false?

This is a huge thing for @Sahara_Jackal to make clear. After all, if Squizz’s killboard can be faked, then that has huge implications for folks like DnG, who have based pretty much all of their bragging on either outright lies, or, well… a killboard we’re now hearing also cannot be trusted to be the truth.

It’d be such a strange thing to fake a killmail for, though. I mean, if you were going to manipulate the system like that in a way that was nearly inevitably going to be exposed it seems like you could find something more … significant? To do it for?

I dunno. I mean, look at it this way:

What kill could you manipulate that would be more significant than the very act of destroying everyone’s trust in killboards? How many eggers rely on those for their sense of self-worth in New Eden? No matter what the kill is, there’d be more people who really don’t care than people who do. But effectively killing killboards themselves?

Whoever did that would be freakin’ immortal. More of a household name among capsuleers than Tibus Heth, Empress Kittens, and Le Martini all combined.

I trust I’ll be forgiven for being a little more informal than my friends would expect in such a venue. I had lamented the inability to respond simply with the Praetoria Imperialis Excubitoris logo due to this channel’s router setup. Chapter Master Lok’ri reminded me that sharing images worked, however. And so I felt the need to share an update I was working on, that is now immediately outdated. 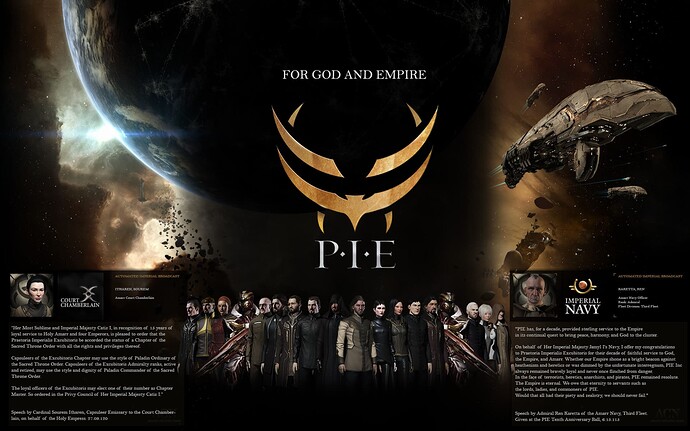 A tremendously exciting new chapter for… the chapter… awaits.

Even when Utari moved to Brave for a time, he was still flying Amarrian hulls. So I dunno what you’re talking about.

And when Utari, pre-PIE Inc, was in Init, and before that CO2, he flew doctrine hulls, which is a lot more recently than say, Aldrith, has flown a Scimitar. Utari and I first met while he was flying logi under me. But that isn’t even what I was talking about. Look at where the bit you’re quoting comes from.

You’ll notice it’s before any mention of expanding skills. What I’m referring to there is that Utari, unlike most of PIE, has a breadth of experience, not skill training. Utari’s been in FW. He’s spent years engaging in larger fleet operations in nullsec. He’s done mid-sized actions in all sorts of areas. He has a broader range of experience than many of the people PIE is bringing to LUMEN.

So, now you know what I’m talking about. Actual experience, not just plugged-in skillsofts.

Fair enough. Thank you for clarifying this

And the Chapter has been incredibly accommodating of my breadth of experience, giving me plenty of opportunity to give advice, put my opinion out on issues, support my leading of fleets or support FCing, authorised my secondment to BRAVE for Diplomatic/Missionary/Large Scale Combat Experience gathering and otherwise generally being incredibly supportive of my ambitions and welcoming of my contributions. I very much hope to continue to serve the Chapter in such capacity, given how valued each individual Paladin’s efforts have been, and how willing to capitalise on them Chapter Command is within our Order’s primary Mission.

That’s all this place is, after all: an exercise in Gallente ego-centric hedonism.

One of the many things it is, there are several things going on, some of them even interesting!

What non space thing did you do today?

Your endlessly running in circles is a metaphor for the Achuran religion. There is no beginning, no ending, no meaning, only endless maya — illusion — with no escape. You run and you run, but you will never find anything, because the Achuran religion offers no hope and no salvation.

Salvation from what? What to hope for?

There is quite a difference between reaching some destination and the journey.

Enjoy the run, you can leave the track anytime you want.

What to hope for?

Come back to us in space, Miss Morgana. You are missed.

I have certain commitments requiring attention at the moment, but it is good to know my presence is desired.

Perhaps next Union Day i talk a little about Kutuoto Miru at the new orbital center in New Caldari, i consider it a relevant tool for anyone in New Eden.

A big hug and remember the journey to wherever you are headed.

Just got back from my vacation in Pochven!

Justify Caldari Prime. Justify the Reclamations. Justify the Elder War. The Triglavians have just done what all the other empires did- but on a shorter timescale.

Really? Because I’m not seeing where the Triglavians are either retaking a homeworld they were driven off of by a starvation blockade, or even raiding an enemy power’s space to rescue people thought long lost without actually taking any worlds.

I can see the Reclaiming parallels a little better, but even then, the Empire never did irreparable damage to the potential biospheres of an entire star system (Starkman Prime is a standout incident, but it was, after all, one world, and they’ve not done it again).

I mean, if you want to talk about ‘conquering space’, that’d be one thing. But that’s not all they’re doing, is it? They’re altering people, doing long-term damage to entire solar systems’ ability to support life, and worst of all, they’re making people like Ferra and people like Saronu actually agree on something (even if it’s just ‘screw those jerks’).

Let’s face it, that last one’s gotta be its own category of war crime, or something. I’m shocked CONCORD didn’t haul Zorya Triglav themselves into Yulai for the annual ‘capsuleers kill illegal automatons’ mob justice rally.

Maybe they should add that for next year.

I kinda doubt they can get a fix on Zorya for stuff like that, and even if they could there doesn’t seem to be a shortage of them. Getting a few at a time doesn’t seem to do much (how many did we kill during the invasion?) and if they could get the Zoryas all at once, I kinda feel like the mob loses that one.

I got the sense that the ‘Zorya’ ships in space were ships directly assigned to the service of the triune entity that identified themselves as ‘Zorya Triglav’ when communicating, rather than all of them actually being Zorya Triglav.

That’s something I’ve been wondering about a long time. One hypothesis for the strange “troika” configuration, where each Triglavian sort of combines three persons in one, is that it could allow the mass-reusing of specific infomorphs without the usual psychological effects. The commander of each “Zorya’s” ship might actually be Zorya Triglav.

Even if it’s not, though, and even if it’s possible, I wouldn’t expect such an abduction by CONCORD of what might well be the Triglavian head of state to have a happy ending. If they really have that kind of power, maybe they could, like, snatch “Master” Kuvakei first? That’s probably someone we can at least be a little more confident there’s only one of, and that his succession might be more complicated than having a fresh head of state walk out of a storage closet.

That’s probably someone we can at least be a little more confident there’s only one of, and that his succession might be more complicated than having a fresh head of state walk out of a storage closet.

I mean, unless you count the theories that the current fellow claiming to be Sansha Kuvakei is a clone, or his infomorph running through the hive mind…

Sure, but it seems like either of those would be something that emerged sooner unless he was, like, some sort of vast meta-organism emerging from the collective imaginings of millions on millions of enslaved and networked minds.

“By the power of your belief, I exist!”

He’s a bit too much a petty little pile of misery for that to be the case, though. It’s been, what, ten years or so and he’s still battering himself against the empires instead of taking all that power and all those people and, like, venturing off to set up his utopia for real somewhere? New Eden’s just one little star cluster after all. It’s a big universe out there.

I mean, there are other ways I could see getting where we actually are (the collective trauma of his victims expressing itself as rage, maybe) but I feel like revenge is mostly something desired by creatures that are still basically animals-- humans, in other words. It seems like a sapient meta-idea might be a bit more of, well, an idealist? Or even kind of an ideal?

Being so totally unable to “get over it” seems very human to me.

Sure, but it seems like either of those would be something that emerged sooner unless he was, like, some sort of vast meta-organism emerging from the collective imaginings of millions on millions of enslaved and networked minds.

Well, either one would need to reconstitute the Hive Mind to an effective degree before it would have the influence to really start sending out minions again, right?

So … to be clear, what I’m really saying is that is really, functionally Sansha Kuvakei, though it’s completely possible that he’s a clone, etc.-- I’m kinda the last person who’s going to say “if it’s a clone, it’s not really him,” you know? What I meant by “either of those would be something that emerged sooner” is that the timing seems to suggest that Kuvakei was either effectively exiled or lost for an extended period, and only relatively recently reemerged.

If they wanted to it seems like Nation could have put together a simulacrum pretty fast. That it took them as long as it did seems to suggest that either he’s the genuine article or something set up in such a way that he might as well be the genuine article. Either way, there’s probably just one unit of him running at a time because, as either an actual or simulated human, he’s apt to suffer psychological … let’s call it stress … from having multiple active copies.

That’s my real point: that “Master” Kuvakei is likely actually or functionally a person with a single physical location that might therefore be exploited to pick him off if CONCORD could just cry, “SANSHA KUVAKEI, WE SUMMON YOU!” presumably with a bunch of candles, incense, and pre-heated blasters, and compel him to appear right at optimal.

(Even then he totally might have a backup, but, he also seems like the kind of person who might insist on not having one? Which might have been the reason he disappeared for such a long time to begin with.)

If he were something conjured from the hopes and dreams of a bunch of mind-bound True Slaves longing for purpose on the other hand … well. I’d actually expect such a being to make a better god than a person, if that makes sense? In other words, it seems like it’d behave the way people would imagine a leader behaving rather than the way such a person actually behaves.

If it’s an actual Kuvakei infomorph that’s a completely different thing from an imagined one, if that makes sense?