I want to go for omega and after i have it idk how to make money for next omega for naw i;m doing lvl 4 SOE missions and in 1/2 weeks i do 2 bilions but with omega i think will be faster but idk how and waht should i reserch frist.

youll get bored turning the game into work, may be able to increase that by 50% depending on what you train as omega

Have you set some goals you would like to reach? if you have, think about how you could go about reaching them. Missions can be fun at times but they do tend to be very repetitive and become less interesting as you go. You can step up your PVE content from mission and join Incursion Community(ies), fly with their fleets, they bring their own risk and rewards, you can get as much or probably even more than you do in L4 missions. Incursions is the endgame content of PVE in Highsec. Depending on how much time you have available to play EVE, running incursion you could earn 2bn over the course of a single weekend.

If you also have access to Low/Nullsec space you can even do Planetary Production to give you some passive income.

and many many more option are available to you, it’s just a question of finding that one or those few activities that interests you

do NOT try to plex your primary account, that way lies burnout and ruin.

If you absolutely want to play as an omega pay for a subscription, its less than 50 cents a day and not only will you take the stress of trying to earn that isk every month off allowing you more time to just do what you enjoy doing. but even if you COULD afford the 1.8b per month for a plex, think about how much more you could afford if you had that extra isk liquid.

So long as you are needing to ask yourself “can I reasonably afford to plex” the answer is no. the longer you play and the more experience you get, the more isk you will make, eventually you won’t have to wonder if you could afford it and THAT is when you might want to consider it (although frankly continuing to sub your primary account and using the plex for a secondary is going to be much more valuable)

Spend your time enjoying the game, not grinding away for the plex.

in 2 days of incursions you can plex your account and go back to do what you want without isk, i was doing that before i moved to west africa. incursion for a few days, plex, and go back to mining

I just want to add my voice to the whole “don’t play the game to plex your account” chorus. I’ve tried that so many times in the past, despite the same voices giving me the warning we’re giving you now, and it led me to “quitting” at least three times. I’m back again and having a great time and the number one reason is that I’m no longer concerning myself with plex.

Now, I don’t know you’re life situation and I totally understand that Eve appeals as a game that could be free… at least, if I work at it a bit… but Admiral Akbar says that’s a trap. And it is.

But if you’re running level 4 missions as an alpha clone, then you’re doing what I’m doing, but you’re doing it for free! So I would encourage you to look at all the options you have as an alpha unless you are indeed willing to pay the subscription fee.

Do what makes you happy, set what goals you like. That’s step number one. Maybe you enjoy the grind. I can honestly say that at times I do as well. But I’d totally agree with others that if isk acquisition is your only goal, especially if it’s simply to plex you’re account, then you’re essentially using your play time and turning it into work time just so you can afford more play time … which you will then likely turn into more work time and on and on. And at the end of it all you’ll likely have amassed a great deal of “play time” with very little actual fun.

Another play to PLEX story…

brought to you by greed.

i can make 2 bilions in lass than 1 month the prob is how i do money as omega and what should i resesch or u guys answerd without read ?
I already have enought isk for omega but What can i do with it. -_-

i have 10 bilions worth ship i have enought monet to buy omega BUT IDK WHAT SHOULD I DO AS OMEGA or u guys dont knw how to read.

So you’ve grinded the ISK for the omega status, yet you have no idea what you enjoy in the game?

Anyway, just do what you enjoy. That is the point with a game, right?

my goal was to have best battelship for an alpha to have capital ship need to much time and i dont rly care about them mining sucks pvp as well or go low sec cuz there are some no lifers who kill u so what alse left what dosen t need half an year for reserch.

Sounds like you don’t really enjoy or play the game.

You just want to sit in the “best” ship and call it a day.

Let me remind you, that eve is not a game where you just grind for some “best in slot” items. There is no “best” ship. There are appropriate ships for certain situations.

In the end, ships are no more than just tools to be used. You say you don’t want to go to lowsec, cause of no lifers who kill you. That mentality is crippling you. You are too handicapped to actually do anything or explore the game. Ships are meant to die. When it dies, you go buy a new one. With each loss, you get some experiences and learn.

I am not you, so I cannot tell you what you enjoy. However, it seems like you don’t even know yourself what you enjoy, cause you haven’t explored the game beyond running lvl 4’s in highsec.

i was low sec lots of time and none succed to kill me i play that game for few months and i never had my ship destroyed all my ships are more than tools for me and i keep al of starting ship in one baze for remaind me from where i start and how much i evolved and sometimes i fly with them doing some sites with exactly same build i had at that point. -_-

Here is a summary of what you can do in EVE: 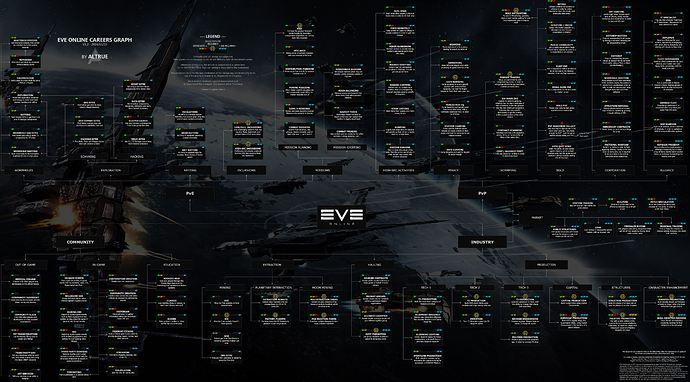 All we can do here is suggest things for you to try, and that is summarized in this graphic. We have no idea what you will enjoy doing, so take a look at this for some options you might not have tried yet and give them a shot.

Can i work / be employed for some alliance or corporations as support ship.

Yes, absolutely. Working with a corp that does lots of different things will also help you try more activities and learn from other players, so that can be a really good way to go.

Check out the Recruitment section of this forum to see what some options are or check out corps like Brave or E-Uni since they have activities that cover almost everything on that chart.

Another option is to change / mix up your in-game activities, such as after running missions for a while, do some exploration or some other PvE combat related content like Epic Arcs or Cosmos Agents, or maybe do some production building stuff from BPC’s gained from Loyalty Points stores, then dabble in Market / Trade, etc.

Hell if you’re looking for more of a challenge, could try running high level combat missions in low level ships, like run lv 3 security missions in a Tech 1 Frigate / Destroyer, however you should probably bling up the fit a bit.

As for going Omega, I do yearly subscription with real money, allows me ability to access everything in-game and to do whatever I want without worrying about making enough ISK to purchase PLEX for next months subscription.

Might not know how to read, but I’m not the one who doesn’t know what to do.

Try to write in English.

waht should i reserch frist.

… everyone else was really helpful already.