[One Universe / One War] The Link between EVE Online, EVE:Valkyrie, and Dust 514

Years later, with EVE:Valkyrie still hot, Dust 512 sunsetting, but still around, and with some echoes of a potential successor, there was a real possibility that the EVE universe promise could happen and cover multiple aspects of what would be an all-out war, both in Space and on the Ground, and thus extend the franchise to a significant degree.

However, we all know what happened, the VR fad passed, Dust:514 was discontinued, and Project Legion AND Nova both froze and/or disappeared, and thus with that the entire hope of this idea disappeared.

Even if the idea is no longer out there, I’m sure CCP still thinks about it. I remember CCP Rattati evoking that Nova needed its “Ring of Fire”, as-in a killer feature that would sell the game, and we all know that the most self-evident feature it could have is a EVE Connection. I’m pretty sure that’s part of the reasons why the game was put away.

As for EVE Valkyrie, it realized the promise of what EVE tried and still tries to do, be an actual Space Simulator instead of a Submarine one with the makeup of Space. Still CCP no longer supports it and they seem to go back to trying to make EVE the Space Combat simulator, as things like the Dr. Who event shows (with emphasis on navigating the space), which is a Fool’s Errand as you will never be able to beat proper 3D navigation with an overview and a 1-second game upda.

Seeing the current competition EVE has right now, with Elite Dangerous filling the Space Simulation side, Albion Online covering the Competitive Sandbox side, and plenty of MMOs on the market, I struggle to see anything that can carry the franchise in the long run other than this capacity to make and do things that matter in the universe of EVE and also outside, with things like Fanfest or the Scope!

And in that vein, the capacity for what happens in the game, the Consequences EVE is known for, to bleed into other games. And that, of course, means other games of the One Universe / One War promise.

EVE:Valkyrie never had a connection with EVE Online, but if it were to have one, you would supposedly have in the same space ultra-nimble Valkyries and slow-moving but warping Capsuleers. Hypothetically, Capsuleers would never be able to hit/track Valkyries well, but would be able to warp out to other locations where Valkryies can’t assail them.

As for Dust:514 it had a connection, but it was limited to Faction Warfare, and there was only one significant interaction. However, a suggested interaction had been the capacity to board enemy Ships and this suggestion made me think about how to make that interaction possible. And that would involve essentially making Ships last long enough so that Dust players would have the time to enter the ship, do what they have to do, and get out with some semblance of a game.

This realization made me think of what essentially is the place of EVE in that trifecta with Dust and Valkyrie.

Essentially, EVE Online is the place where installations of gameplay can happen before being interacted with by Dust players or Valkyrie pilots.

Whether it is through PI Installations that are exploited for months, if not years, or through Ships that are supposed to be those giants platforms of shields and armors (but have now been trivialized into common ships that get blapped by the second), *EVE Online should be the place where slow, durable, and lasting vessels interact with each others to create battles (whether they be on planets, or in sites) and battlefields (between ships), where other games get to interact with.

Of course, with how EVE is right now, the Ship vs. Ship part wouldn’t ever be possible. Even Titans in some situations get blapped in a second. Frigate fights can finish in less than a minute. Overall, if you had to board a ship as a Quick Match, you wouldn’t even get the chance to get out of the pod.

As for integrating Valkyries in all this, the Sites deployed during several events are perfect places for the Valkyries to do their fights. But the problem is what would a Capsuleer do against something as nimble as a Valkyrie?
Simple, but Tankier.
A LOT more Tankier.

Pretty much, EVE Ships would have to be Durable, Tanky Platforms that Valkyries would be raiding, hampering, and around which they would do their fights against each other. While Capsuleers establish control of the sites and remove higher threats that the Valkyries can’t handle.

This leads to a picture, where contrary to what CCP is trying to do right now with EVE, EVE Ships and Capsuleers should have slower, less frantic, less twitchy. Longer lasting, and more site-based gameplay instead of Transversal-based and Alpha-based gameplay, making it so that even a Frigate would last long enough to offer the opportunity to be boarded.

Pretty much, switch the gameplay of EVE from Tactics to Strategy, and let the other layers of other games handle the twitchy, quick kind of gameplay.

I remember that trailer. I was pretty excited for what it promised after six years of playing EVE with only incremental iterations for updates. It was starting to get a little stale for me.

I should have known better than to get my hopes up after all the other broken promises I’d already lived through. But I did. As I always do when they announce something big.

I remember those days, they were full of hope, but now, with most of the talented Devs gone, there’s only a snowflake’s chance in Hell that this will ever happen.

I would never stop saying it and writing it:

And everything you unfold for us here would necessarily apply to it, and this without PLEX, without ALPHA and OMEGA, without EPP, without extractors and injectors, etc…

So personally, I can only applaud such reasoning while completing it as well!

What is Eve Online? General Discussion

Hello @Shipwreck_Jones , First of all thank you for responding. Know that I am in no way doing this in order to sabotage the morale of the community. In 19 years, I have hardly ever intervened on the forum. Even in 2011, when I had very good reasons to take part in the collective anger of the players, I remained distant and discreet. In 19 years, I have only observed the reactions of players and their suggestions, including those you quote (by the way, none of them are related to any request f…

But hey, by the time CCP has finally made the decision to give up its stubbornness of proud and presumptuous vikings, human civilization will have completely collapsed under the weight of the current global systemic crisis, including global climate change, the pandemic and the war, are at this stage only the visible face of the iceberg…

Also, what’s the point of sweating it out by constantly having to repeat the obvious over and over again, since at the same time, our dear helmets from Veksø prefer to play with LEGOs; what an irony (by the way, I haven’t found anything about it on the Star Citizen site yet)…

Q. I am LEGO VIP, so this is not an attack on LEGO, but you have to remember that there is a time for everything, like the PLEX for GOOD operation initiated just before the inflation of + 33%…

Our vikings live on an island and therefore have only a narrow perception of the world around them, and that’s why their EvE Online drakkar is taking on water from all sides…

Our Vikings therefore behave like lemmings; they too will die out in fine…

I thought the concept of connecting different games to one central game was cool, but beyond that I didn’t give a ■■■■ about DUST or any of that crap. CCP needs to make a spaceship game and get the ■■■■ out of their own way (and our way).

CCP needs to make a spaceship game and get the ■■■■ out of their own way (and our way).

CCP likes to dream big and deliver little. They’ve been doing it since 2010. Hilmar wants to live in an ego-cloud daydream where he’s the bleeding edge of MMO development.

Well, he got his wish, sorta. EVE is certainly bleeding.

You don’t jump up to start grand new initiatives while your ship is sinking. You patch the holes, get the (space)ship back on course, and make sure your ONE AND ONLY SUCCESSFUL CASH COW EVER is doing well and on solid ground before you start plotting new courses into the future.

CCP - bring back the sandbox, put the tools and shovels and sand in the players hands, add some actual PvP into the mix, and maybe stop charging extra while delivering less. Build on success before launching ever more failures.

““We are incredibly proud of what we accomplished with EVE: Valkyrie and its Warzone expansion and…”

Sci-fi Dogfighting Game EVE: Valkyrie Will Be Shutting Down On August 5 -...

CCP Games has confirmed that its multiplayer sci-fi space dogfighting game EVE: Valkyrie will be shutting down on August 5th.

cradles my copy of The Second Decade

You died so young, you were so beautiful sniff

The link? Sure, One game, Eve Online, made a lot of money that was mismanaged to create 2 crappy games. Then things then grew so grim prices on the original game had to be raised to cover the cost and production of future crappy games…but we’re supposed to be okay with this because we can all pretend come from the 'sAmE uNiVeRsE."

One massive advantage CCP has thou is they have all this dev work done on it still and since they where separate games they have been been balanced a bit, which means nothing is stopping CCP from importing all that stuff into eve and just expanding it in all directions.

In that sense all that dev work is not actually “wasted or lost” just incomplete. Lucky CCP stuck to the same theme and universe imagine trying to implement medi-evil stuff into eve, Space vikings lol.

I only wanted walking in stations.

Where would you like to walk to out of curiocity. 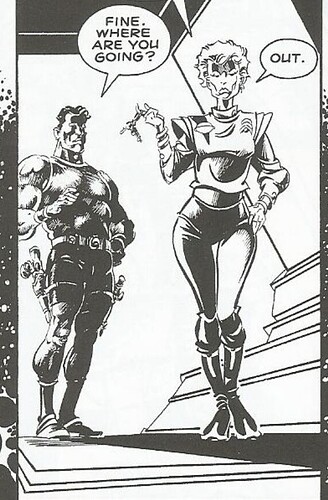