Why does it take 9 days to get a response on a ticket?
if there is no customer service, there is no game. People are not going to pay 25% more to play and then have zero effort or communication from dev team. Very unprofessional. This is not how you grow the game. All the fan fare to get new players means nothing if you don’t take care of the one’s who carried you for almost 2 decades.

Were you able to get a hold of the manager?

I called CCP and they didn’t pick up until the fifth ring. So I usubbed my 126 accts.

Was it a… stupid ticket?

oh look another scrub in his one man corp talking trash on the forums. I’m impressed bruh. /clap

no it isn’t a stupid ticket, but your reply is stupid. did you get the attention you wanted?
Zkillboard looks great, 2 kills 35 losses. so I guess you are another care bear forum warrior station spinner eh? impressive for almost 10 years in game, that’s a heck of a learning curve. I’ll be sure to take your advice about anything Eve related.

nope, but i was able to get ahold of your lack of a killboard, or anything else remotely interesting. I’m seeing a pattern develop here, it would appear that the people who post the most, have the least to contribute anywhere else in their lives, hence the absurd comments and attempts at humor. I guess some people need to find their validation on the forums, because they can’t get it anywhere else.

oh look another scrub in his one man corp talking trash on the forums. I’m impressed bruh. 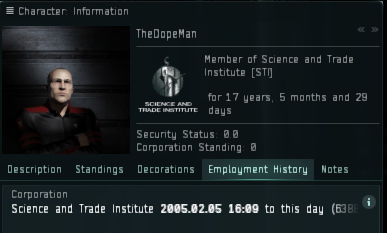 yet again you display your lack of understanding with your own words…and the cringe part is, you still don’t have a clue. you actually think that was a clever comeback.

Why does it take 9 days to get a response on a ticket?

Word’s going around that they’re understaffed. I personally don’t kow. If your ticket went through along with the other ones it surely will be handled in the order it was received. CCP does take care of tickets as fast as they can. I put in a ticket a few weeks after I started and it was handled a week later.
Let me tell you, a lot of other games don’t even handle tickets, they ignore them - that’s when you can submit a ticket. Most of the time you’re sh- out if luck.

your lack of a killboard

You mean the pages of solo frigate combat?

What am I going to find if I search your name?

why is that funny to you? You got called out for being a scrub so you attempt to infer that i am as well then emoji yourself into feeling better? without actually knowing anything about me or my toon? you haven’t shown anything, I have. Don’t try to downplay it bro but acting like what you are saying is true. everyone here can read.

i appreciate an actual response, i hadn’t heard about being understaffed but that could be the issue. though i don’t see how with such a small player base.

why is that funny to you?

You wouldn’t get it.

without actually knowing anything about me or my toon?

Yep, if you can’t take the heat, then get out of the kitchen.

Player base means nothing. CCP is deep in development for new things and chasing bugs all the time. Plus, you know how it is with these corporations nowadays: one guy takes care of three jobs for half a salary. Give them a break.

you are right i wouldn’t get it, because I’m not a 12 tear old girl giggling at herself during an awkward moment. What heat? you said pages of solo frigate pvp, but you don’t have any pages of anything.
I am confused how you think you are funny or clever, stay out of the kitchen, bro you aren’t even in the house…

I’m always in the market for older unused characters.

you said pages of solo frigate pvp, but you don’t have any pages of anything.

The man still thinks my name is “LO KOVAL” with an L!

199 destroyed 93 lost, changes nothing, still a scrub.
I could post mine but i don’t care enough to have the connection made between alts. but i will say, my newest alt is barely 2 months old and has more kills and only one loss to snuffed out.