I’d recommend moving the close and minimize buttons to the screen itself in the Planetary Industry Compact Mode. 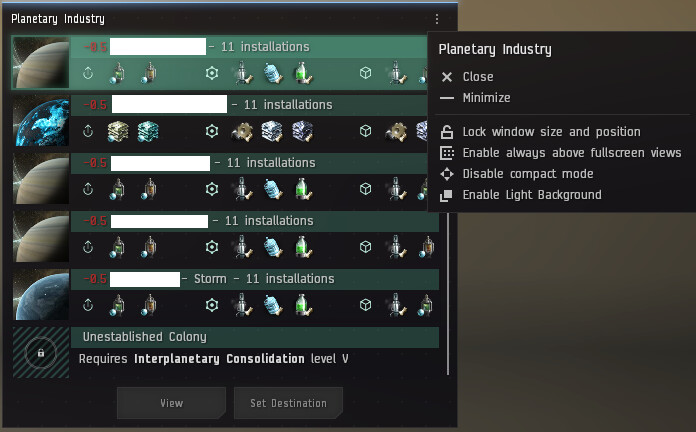 Before the the Photon UI it allowed you to drag and drop deployables from your inventory instead of having to launch for self.

Overall: better than the original.

Some specifics:
I like the new Selected Item box better. Larger item image and simplified icons.
I like the drone box better. The cog should be in the section as you moved it so. However, it would be nice to be able to remove some drone “groups” from the groups menu and be able to edit this all at once–when not in space.
I still can’t figure out how to merge chat channels into a single window with tabs. These should drag-and-drop-add or give a dialog: Do you want to combine these two windows? Yes/No.

I’ve been using the Photon UI since introduction and there are a couple of things I would like to see fixed. Likely already covered elsewhere in the thread but I don’t have time to read it all!

One minor issue: The items/ships tab for hangars doesn’t show up until you manually select a hangar with something in it - this is new to Photon - never had the problem with the old interface

As soon as you select a hangar with contents - the tabs reappear:

My other concern is more bothersome. The mouse cursor is virtually invisible on a 4K screen and there is no way to scale it. I suspect aging eyesight is partly to blame but pretty much any content that involves risk is discouraged if you can’t find your mouse! I don’t have a problem at 2K resolution - you seem to have kept the pixel count the same on the high resolution screen making the cursor 1/4 the size. Please consider giving us some way to scale the cursor.

It feels like when Compact Mode was asked for, what was heard was “Hide as many elements as possible”. It’s silly that these options were perfectly fine being accessible right on the window itself.

However, I would not file a criticism without also offering a solution. Please review this UI mockup I made to see a potential middleground with a Compact UI interface, while keeping functionality intact.

I’ve added these compact “icons” onto the header bar of the window so that they are not large and obtrusive - but still selectable without opening a separate menu, satisfying the “less clicks” theory of UI design. CCP, please let me know if you would like more UI mockups as I am more than happy to oblige.

Compact mode is still not available for “Active Ships” and “Inventory” tabs. Even with 90% UI size, they are huge. The Chat channels and tabs are also huge and bulky. I can fit half as much channel tabs on my screen realestate than before.

I overall like the cleaner look and feel and I thank you for the work being done. I wish compactness is the primary goal, however.

@CCP_Paragon
In the news “Summer of Streams continues!” a Dev Blog was announced for last week (15 Aug. to 21 Aug.). Does it exist somewhere? On the official site, the most Dev Blog is from 2 Aug (Economic Report).

Following on from the crazy adventure that was Fanfest 2022…

Yeah, you lost me there. How tonedeaf can you possibly be?

Photon UI looks pretty, but is utterly useless and instead of improving our info per pixel you limit it.

In the new interface, I can’t forward an email to any of the maillists

Also as someone that has many chat tabs and i can imagine i am not the only one, the fact that some of them are hidden now and i have to click that tiny down arrow to see the list of chat tabs is not all easy if you are in a more tense situation, i ended up moving corp + alliance into the same box with local, and now when i log on corp is always the default, which means i have died cause i failed to see i was not alone in space, having a way to set default chat tab would be nice.

And maybe someone could look at say Excel and see how you can scroll the tabs there with the mouse wheel, maybe that could be done here to so you could use the wheel to see the hidden chat tabs.

Why does the photon UI have to flash on each action? I switched it off after 20 or so orders as i was beginning to pee myself off. if we could configure the outline not to flash every action would be good.

I tried it again ya you can ignore the flashing after a bit but why does take up so much space on the display? it is Massive open the box for selling items and it covers a lot of the screen up. its looks nice easy to read but the pop up boxes are far to big

Terrible. A lot of cosmetics, little functionality. And developers should remember that not everyone plays in 4K

What CCP Junison did not mention is that Photon UI was designed to be compatible with EVE Anywhere. Lightweight metro style interface, easy to read on smartphone display and click with a finger. Compare Photon UI with EVE Echoes screens, they look very similar. That is the only logic explanation why to make everything so big and persist on this change. For me Photon UI looks cheap, flat and ugly. I don’t like Metro interfaces. I hope CCP will leave old UI choice for desktop players with 2k monitors.

Grouped turrets/launchers are missing a Put Online option when in space.

Ungrouped turrets/launchers do have that option

Not sure if this is intended behavior or a bug…

I think the most important piece of feedback I can give, is that “compact mode by default” needs to be an option… I get that some people will want granular controls, but I think the vast majority will either want compact everywhere, or nowhere… Having to manually root through every window looking for the compact option makes the already painful transition from the legacy UI, even more tedious.