Thank you for the feedback so far on Photon UI. It was great to hear everyone’s thoughts when we added the Compact mode and now we would like to hear your thoughts on the updated Drone window.

On the Drone window we want to address issues with visibility and overlap. We are adding glow and tooltips, increasing the minimum height, updating some positions and spacing of the controls and on the window itself.

There is also a slew of defect fixes for Photon UI in this patch which are too many to list here, but they can all be found in the Patch Notes. We would very much like to continue getting your feedback so please go try it out and let us know what you think. Even if it means you having to resort to using ECM drones.

Does that mean it will be bigger than we want it to be? Is the compact view now actually more compact or did you just remove the header and left the humongously big groups as is?

How about a comparison screenshot between existing and new with, let’s say 5 collapsed drone groups in the hold and one expanded group in space.

I was waiting this drone window update so much, the little bottons to manage drones individually just make my day, no more making groups or drones just to have it all separated, so yeah thumbs up for this 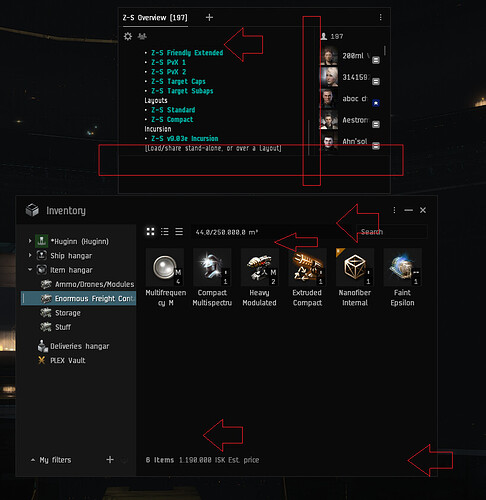 Again, no change with separation of different functional window areas.
A incredibly thin 1px faded line in the chat. I don’t know if you are aware, but your demographic is over 30. This UI is a terrible strain on the eyes for everyone who wears glases.

In the cargo window it is even worse. there is no visible distinction between functional areas at all. see all the red arrows above.
If you enable light background (which btw, completely ignores the transparency setting) it is even worse, because on some backgrounds you can see a distinction on the search box or “fullness indicator” but on others you cant.
The scroll bar is also nearly invisible.

I said it before, this UI is bad.
But the worst thing is: It is even worse for anyone with even the slightest visual impairment.
You can’t see where one thing stops, it strains your eyes,
and you cannot even change the stupid colors, because whatever you do, the background always stays black.

Undocked, selected drone group then the above…

I am having same issue as above post. I am unable to launch Drones

Unless I am missing something, For Drones, the shortcut key ‘attack’ will apply to all drones in space. Is there anyway we can command drones individually without having to use the right-click menu?

Examples:
click folder (or have no drones selected) + ‘Attack’ - commands all drones to attack current target.
Click one drone (or select multiple ones) + ‘Return to Bay’ Command - calls back just those selected.
Select 3 individual drones in bay + ‘Launch’ command launches those only (regardless of which group they are in.

Additionally is it possible to order the drones in a group list (ie. I want to put the damaged ones at the bottom [would be nice if the client did this automatically]) so a launch command picks fresh drones - from the top down - instead of random ones.

… quick thoughts… the sorting stuff… i’m turning photon off, because it seems like a simple thing to test that is working before implementing… I’m worried I’m going to enter a danger zone and suddenly some feature is not working because it wasn’t tested.

Total drone count is incorrect, plus awkward blank space between Drones in Bay and Drones in Space. 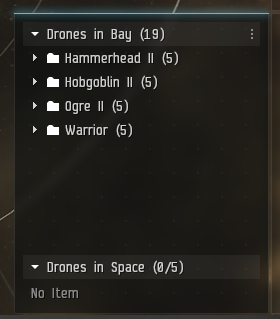 How do I reply to the original thread asking for feedback? I tried it out today to give Photon UI a fair shot and had to turn it off to restore functional gameplay. Upon turning it off I was prompted to give feedback but I can’t reply to the thread it linked.

This new UI is useless. Sorry for being candid but sometimes major issues like this need a blunt response.

It’s all dead space, big, bulky, clunkly, slow to load, not responsive, hard to read, more clicks to navigate around, slower to get things done, simply can’t do some things anymore… just generally it totally ruins the way I play the game.

Sure, some things might look good here and there and the new player might never notice. But when you consider veterans or the players who really push the limits (I don’t want to say pro player but them included).

Maybe you need somebody who actually plays with this and uses all the features to give feedback instead of going with some new flashy design that you think looks good but actually makes the gameplay miserable. Oh, and it doesn’t even look that good… It looks like the original boxy UI that was replaced a decade ago but slower and worse.

Please remove the big drone icons on the launched drones… at least in the compact mode, it means the window needs to be too big to see all drones… 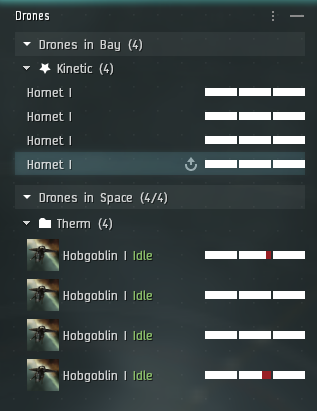 Thanks for working on the new Photon UI. The updates are awesome.

I like what you’ve done with the new drone window but I have a suggestion. Rather than using icons to put photos of the drones next to their name, I would rather have their damage type.

Just like the icons next to the anti-matter charge. Copy those for the drones! 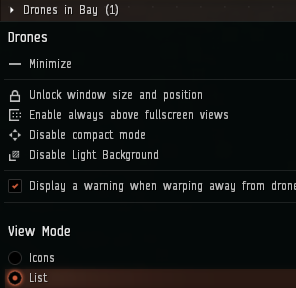 I like having the ICON. I just would like to be able to control the size of it. There is too much padding with the ICON.

Edit: I learned that you can turn off icons (drone window, menu button top right corner) so I‘m kinda ok with the window as it is

Very much this. Drone window compact mode needs to be a lot more compact. Last update made it a lot worse. While I like the icons, there is just no space for them. At least not in this size. If your drones have longer names such as „Caldari Navy Hornet“ or whatever, you cannot see the status „idle“, „fighting“, „returning“ etc. unless you make the window super wide. Thanks!

the white of the drone health bars is way way too bright and intense as is really the “white” in all other places in the new UI , i like it , but it is burning my retna out … thx !!

Really dislike that the drone tab does not list the numbers of drones in space. With the regular UI if I have tabs stacked together the tabs for drones will say drones 5 of 5 or 0 of 5, etc. Very useful at a glance to see if I have drones out. With photon it seems I have to click the tab to open it and see. Reason alone not to use Photon UI in my opinion

Rhan you for very for redesign, this Proton UI is very nice and parcticaly.