I apologize if this has been written before or if I am missing something, but is the ‘Join Corporation’ window in Photon broken? I can’t get it to change size and none of the menu buttons like lock or enable light mode work either. 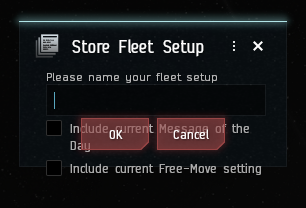 I didn’t read the olds posts, I don’t know if the problem is already know. Sorry for the double post if it’s the case.
Since I have enabled the Photon UI, I have a little problem and it happens 2 times (today).
My computer put my screens to sleep, like it should be when I’m not around. But the computer did it when I was playing.
At first I was Oh Gosh ! My GPU is dead and then I saw the screen asking for the password.

It never happened with the old UI.

I have a windows 10 pro, computer with 2 monitors. If you need more tell me.

Greetings, in general, I liked the changes, but compared to the previous version, there are changes that I do not like (they will be in the form of screenshots)

The result of the change is not bad, but the huge indents VERY VERY interfere

Scaling seems to be broken. I have a larger monitor, and experience a lot of this sort of thing: 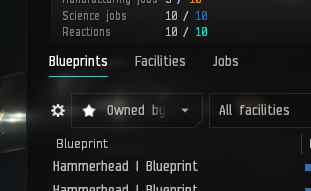 where text that should be readable normally expands due to my scaling percentage, and then doesn’t fit in the box that it was designed for. 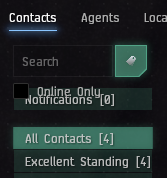 The new UI looks very well made and designed. Between the simplicity behind it and the functionality of it thus far I am well pleased with the new UI for many reasons. On the same hand there are a few tweaks I feel would make it more user friendly. One being the space now lost with the new bubbly appearance it feels like it takes up a bit more screen space then the simple UI did.

Too cartoonish with the bright buttons and stuff. Hilmar mentioned Eve was supposed to be steam punkish. Ummm not hardly but this is NOT a good change. That’s 2 minutes I will never get back looking at it. Fire the entire UI team. The skills window disaster, PI, the list goes on and on and on. How you can put CCP and UI on your resume and expect anyone to take it seriously? Changing the Dscan UI while ignoring the Dscan UI that constantly changed the distance to 1 AU. Priorities, CCP has noe.

First impression was good, maybe because its different. But:

Initial visuals are nice,
Not sure if you have this on - but I noticed “highlighting” parts of values (so selecting the 38,000 of 1,538,000) is not visually confirmed. The highlight of the selection remains on the whole value.

I appreciate the work and effort put in to this UI, thank you for the effort. Having said that the UI makes me want to quit the game even after i changed settings to try (to no degree of success) to my preference. I would quit this game if i had to look at this UI the way it is right now. My suggestion is dial the colors down several notches. i went so far as to change my monitors settings trying to make it more appealing to no avail. now the good it had a good modern space fill to it. The style was cool new and exciting. Thank you for trying to make the game better and exciting.

A couple of minor graphical notes from my experience with the UI:
When using the radial menu selecting an object in the overview, if you select the name of the object with the cursor, the name appears in a pop up text box that covers the upper part of the radial menu. Obscuring the menu that you have to manually bring up with a window showing information you already know is…not good.
The pop-up menu when you redeem items from the redeem queue is actually more legible than the old one, which I like. However, I dislike the increased frame borders on the redeem queue window itself, as well as the inventory menus, and the increased font size means I have to scroll through station containers and the ship hangar list more - which would not be a problem, except for the very aggressive scroll speed; I feel like I’m looking at picture slides of my inventories, rather than scrolling through a single list. This makes it visually more taxing to review an inventory, if you’re not using the search tool.
The probe spread icons in the lower left of the probe scan window are too small inside their ‘buttons’, making it harder at a glance to know which probe formation I’m selecting. The probe spread slider in the lower right is a little confusing - I would prefer a dot icon on either end of the bar for selecting AU spread; I can’t tell if the spread slider goes all the way to the end of the bar, or if there is a little ‘dead space’ on either end and only the interior dots are the valid spread choices. The active probe spread icon on the slider looks too bright to me, I don’t think it needs to be highlighted. As a general statement, I dislike the high-contrast lighting of elements like this, because they attract attention unnecessarily without really improving readability and can lead to eye fatigue. I don’t open the probe scan window to look at the slider bar, but every time I look at it my eye is drawn to that little rectangle. Similarly, when there are no signatures detected in a system to be listed in the probe scan window, the NO SIGNATURES DETECTED message doesn’t need to be multiple sizes larger than any other text on the UI.
In general, removing boundary rectangles inside chat windows and other windows with multiple lists in them (like the character list in chat windows) is nice, but I’ve noticed myself misreading certain elements, e.g. the listed number of pilots in local chat, above the names of those pilots, as an additional character in local.

I’ll be switching back to the old UI, not because I dislike the overall more clean look of the Photon, but because the small elements including those listed above are distracting or causing eye fatigue and readability issues. It’s a good start, keep iterating.

I liked aspects of it. The issues I had were the lack of functionality with fleets and agility to edit things like alliance description. The window is messed up.

The subject line when sending eve mails is too small to be able to read the text you input into it.

Overall I like the new UI but compact mode is a must, I’ve noticed it’s on sisi so I’m just wondering when can we expect compact mode to make it to TQ?

I just started using the UI. I love it. Very pleasing to the eye and works great. The only thing that annoys me is the placement of the board corvette button. I think it is just a matter of getting used to though. Good work!