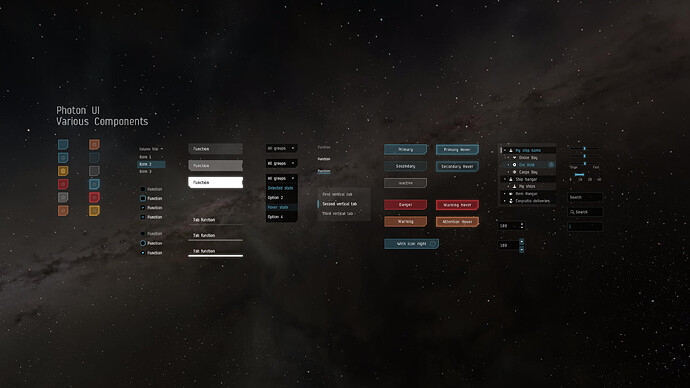 This marks the beginning of the first Feature Preview system which allows you to try out new things we are working on for EVE Online, live on Tranquility as an opt in system. We have also created a new dedicated forum section for Feature Previews where you are encouraged to take part in helping us make this the best it can be for you.

Right now only the Photon UI has a section as it is the only one in this system. The features in the Preview System and the Photon UI are in active development, and therefore not in their final form. They can also be easily turned on and off via the Settings Menu.

You can check out more details on the dev blog on it here. Try it out and tell us what you think and what you want to see changed.

On the other hand I’m kind of dreading more UI changes, because I still cannot find what I need in the skills window as easily as I could before. The nice-looking new UI with the big colourful buttons just seems to miss a sort of clarity for me.

Anyway, I’ll give the feature preview a try once it arrives on Tranquility!

[edit: this is the writing on the wall for singularity test server. bet you dollars to donuts they announce the shutdown of sisi soon after releasing this new 'hey, why pay Q&A dept. like we have one. lulz"]

? so you burnt out a whole bunch of actual live testers since that debacle in November, urging us to give you ‘feedback’ which in the end merely turned out to be free Q&A to report glaring and numerous bugs…actual feedback? hahaha

yeah, no, this is gonna force feed us the new stupid nearly impossible to customize windows that have graced our presence like pearls among swine since Agency.

Nice, a tablet UI for the desktop

So… is the next preview a modern client written in Go rather than end of life Python 2.7?

will there be colored icons? or ability to set any color of Ui that you want?

ability to set any color of Ui that you want?

Let there be light

Just plese, please don’t turn every window in a fix size window with a lot of unused space. If you are on a laptop, the newer windows are impossible because they use up so much space.

are the devs planning to enable custom colors for the UI rather than presets in settings?

Just to confirm, the Mac client is not supposed to have the Feature Previews enabled, yes?

Google called, they want their Android material design back.

then don’t use it.

But I do like the look otherwise. Slanted scifi edges are here!

Python 2.7 is dead wood, no need to change the rendering (though Vulkan would be nice), just call it from Go

And for what benefit? Out of the players I’ve interacted with, I have never heard the complaint “Man the Eve Client sucks and is lacking {Foo} features/performance because of Python 2.7 calling the Qt rendering pipeline”. Which for some {Foo} provides end-user value.

Yes, depending on EOL things sucks, but as in all tech debt kinds of considerations, the costs have to be balanced. I don’t think we have enough information to make an informed demand on the outside that they use/don’t-use specific technologies. Which is what you’re doing.

and cross platform UI’s are possible using Qt (amongst others including Gtk and wxWidgets and more) bindings. I know this because I just put a Qt window on my Linux desktop using Go.

Great, glad it still works about 8 years after I first tried the same

Native rendering is done by Metal on Mac, DirectX on Windows and whatever (OpenGL/Vulkan) on Linux, or Vulkan on all platforms.

Go can call those renderers with bindings (just like you do with other languages) or even their own native code too.

That’s fine and all, but the point is: I would rather CCP work on actual features than spend time building a Qt replacement that is a high level UI library written in Go instead of C++.

Just to confirm, the Mac client is not supposed to have the Feature Previews enabled, yes?

Just to be 100% sure I tested it - yes, the feature preview is enabled in Mac clients on Singularity (tested on M1 MBP).

I love how a topic about the new UI has been derailed by “let’s just simply rewrite the whole backend in another language!” nonsense.

Love the new UI, hope every UI element and dialog gets a refresh.

Love the new UI, hope every UI element and dialog gets a refresh.

Problem is though it’s all still various shades of dark.

Ohhh, it’s only after you login.

I only checked the esc menu on the login screen and apparently that one is different and doesn’t have the tab enabled.

I’ll take the bait. I can’t wait for a space game with a blinding white UI