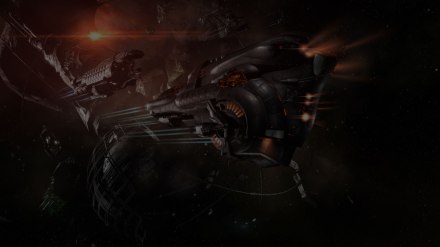 For those interested, I did a write up for the new live event at my blog.

First site and it’s already very annoying. I guess warping in a covert ops to hack to trigger the BS, warp out and warp in a combat ship works as well.

You’re right about the Salvage Drones, they don’t seem to do zip with that BS wreck.

So is the new drone classified as a medium or heavy drone? I notice they were careful to ensure it would have limited use with a Gila or Rattlesnake.

Any reasonable explanation why they keep doing this? Why all this point and click suddenly?

Anti-botting presumably. Or just to annoy the f*ck out of us…

You’d think they could spend an iota of time to design a unique drone model for it. Someone ran the stats on Reddit and it apparently fares best with ships that are limited to 100mbit of bandwidth. While it will get the Gila’s medium drone boost, it has less damage, total EHP, speed and tracking compared to a pair of T2 medium drones.

Anti-botting presumably. Or just to annoy the f*ck out of us…

right, because why botter with all that NS anoms and how easy is to bot them…

I know there is supposed to be competition for items but to kill 90% of the drone spawns only to have someone steal the loot kill, I mean come on lock the damn site once a kill has happened or something, waste of time extremely disappointing - wont be wasting my time on this event ! .

How to actually complete a site? Kill drones, break code and salvage? All-in-one?

Nah, you hack the can with a data analyzer, then the battleship with the goodies warps in. Kill it and loot it - done.

So it’s a stratios only event? Others will have a headache.

Is there a reason that I am not seeing it in my C5 wormhole? I see it in our connected C4s and in the K-space but we do not have any beacons in my C5.

Unfortunately, wormholers will be unwilling collateral damage, as they often are.

but they are in other wormholes. Am I just supposed to believe that they only left out the C5, and presumably C6, wormholes? According to the information on this event it is supposed to be EVERYWHERE. If it is in other wormholes then it should be in ALL WORMHOLES. And the fact that wormholers are the unwilling collateral damage is BS as most of the time it is done with the direct knowledge that it will affect wormholers and it is done regardless, or because of, that fact.

The hacking seems to be pretty easy. Should be doable even without the hull bonus of the SeO ships. Also you could team up. It’s an MMO after all.

The sites aren’t spawning in my C4 wh, nor in a c3 I’m connected to. A c5 and a c2 in our chain are spawning the sites. No idea why they’re spawning in some whs and not others.

Does the hacked rogue drone at warp in have a very very low chance of dropping anything?
I have yet to get anything from the successfully hacked drone

God why does CCP keep making events? They are not fun and they are for highsec care bears. If you make more then 80mil/hr then there is no point in doing this.

I love how the battleship Drone just warps off or does not drop anything sometime. This event sucks! The last one was more fun, I understand the extra clicking to stop botters but come on. Just had the stupid Battleship just up and disappear on me!