Sepphiros, with an SICH logo behind him at the wall, standing in front of a podium begins his press conference on the Semiki situation.

"Ladies and gentlemen thank you for being here. I will begin getting into the subject in hand. As of yesterday, SICH alongside our partners, Villore Accords, approached and were granted to help Aliastra corporation into their effort to address the situation that erupted in their station that according to reports emerged as offshoot of a cybernetic attack in the Zainou Biohazard Containment station.
SICH and Villore Accords will help from gathering, studying and cooperating with Aliastra, to aid them to find the root of this catastrophe."

At the side of Sepphiros there is a holographic imagery displaying a presentation while he speaks. The first imagery being that of an inventory material 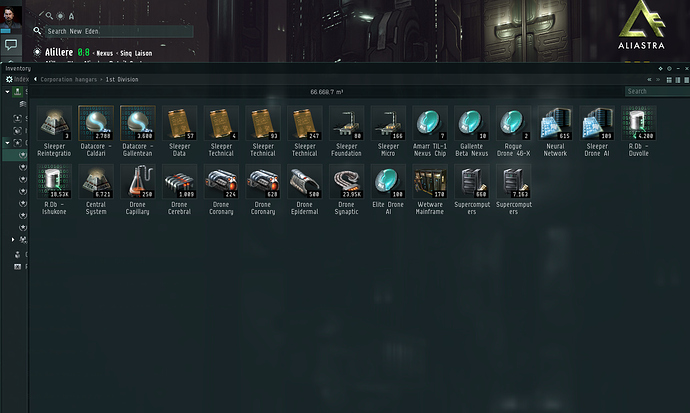 “I am going to present prior to the questions, the thinking of our scientists and how we can help through Rhea Initiative. I state for the record, that we are in touch with Aliastra and we cooperate in many levels but I hold NO insight over to how and what they work at. We simply offer proposed solutions we believe will help with the situation and within the boundaries they have provided.”

“As we all are aware of, the threat seems to be lethal as with how it manages to hack cybernetic and then cause physical harm. Of course, finding the root of the cause and the technicalities is why we are all here for.”

“We have shifted within 24 hours 170 Wetware Mainframes and 7823 supercomputers. Although Rhea Initiative operates under far larger numbers as a whole, and taking into account how many projects of Rhea Initiative had to be cancelled in order for us to participate into the Semiki situation, our engineer teams started off with a modular triple helix experiment that when the results will be coming back, we will be expanding the resources. In other words this is just phase one for us.”

As the hologram begins demonstrating the bits and pieces as a presentation of the triple helix, Sepphiros looked over the journalists.

“On the first level we have the understanding that this virus finds a host and undetected,as so far there hasnt been any signal other than how people end up feeling, to find a common ground with already used Empyrean technology. For this, our scientists begin the experimentation with the usage of running databases and datacores on models that we think have the highest probability of succumbing to the Rogue Drones. For this reason our algorithms and neural networks, take all the models that were cataloged, as provided, at the system and then are being compared and ran in sequence with the second part of the helix which is…”

“Running a comparison with known but ongoing, research on Rogue Drone technology itself, that seems to be having a faster spread rate to the first helix. In other words, we are trying to find and recreate the models that Rogue Drones have been sighted and projected to be able to host and completely hack our own technology.”

The hologram presentation switches to sleeper and nexus chip sightings

“After our algorithm is finding an appropriate satisfying capacity in helix 1 and 2, the hypothesis of our teams stand into exploring the probability of what if the technology we are dealing with here, has some higher advanced capability. For this reason we turn our attention to sleeper capacity instead of it being a mere Rogue Drone advancement. This is why we are running the algorithm against the leading candidates of sleeper data protocol interfaces, the technical schematics, their foundation blocks and sleeper micro suits. Also we are running on known sleeper Drone AIs and neural networks that can fit with helix 1 and 2 and then creating everything using the sleeper reintegration control and central system controllers that we have found throughout Anoikis and not only.”

Sepphiros looks now over to the audience

“In other words, at phase 1 our scientists are trying to recreate the construct itself so we can hope into reverse engineering it and stopping it from spreading. Before I take any questions, I will simply note that there are five more leading experiments, some of them inspired from this one and adding other variables and one which is unique, a possible longshot but because we are in the design phase for now, I want to keep this press conference on the experiment that I can best answer questions for and any other operational discussion that you might want to bring up…So lets start”

Sepphiros accepts a raising hand as the lights in the room come on.

Journalist: “The technology behind this and the equipment used is SICH while the materials provided are a mixture of Villore Accords and Rhea Initiative participants?”

Sepphiros: “Yes, that is correct. I want to thank our partners at Villore Accords with helping us with their provisions. I wish to take this moment to state also that inventory is far far larger. Its just that for this experiment the top candidate models have been selected for testing. But of course Villore Accords members and personnel are very invested into this project. I thank them for their trust in us to handle through Rhea Initiative expertise the volume of the research.”

Sepphiros nods to another face at the crowd pool

Journalist: “Have you had any update from Zainou Biotech regarding them granting you access in Semiki?”

Sepphiros: “No, as of yet Zainou Biotech has been rather silent.”

Journalist interrupts “…and have you been hailed from one of the other capsuleer organizations that are at Semiki?”

Sepphiros: “Look, I will remind the body, that SICH is a neutral entity that has been trying to help loyalist institutions to resolve a crisis. With that said, although there is a general feeling of skepticism from some groups such as RDC to the prospect of Villore Accords coming into the project. Other than that, we have received no statement from IRED nor HECON and we have received a decline from ARC.”

Journalist: “How does that affect you?”

Sepphiros:"Quite honestly it doesn’t. On the one hand, from a Gallente perspective, Villore Accords has any and every right to participate and help Aliastra, a Galente side megacorporation in interstellar terms. On the other hand, there is general hostility between the groups. As SICH, we have extended our hail to the Caldari side, who just as well have groups of their own cloth such as Villore Accords. For us as SICH, being neutral, we have went to directly help the affected corporations and we don’t wish to seek into breaking the sovereignty and obligation of these loyalist groups.

Journalist: “Is there any group in particular you would want moreso than others to collaborate and vice versa?”

Sepphiros: “In all honesty, apart from HECON, we dont feel we could trust any of the rest. Potentially, and that is a large hypothetical, with I-RED…but their association with Devara Biotech, the terrorist CODE affiliated group through their owner who simply goes around wanting to blow up stations in hopes of getting lawsuits withdrawn like an outright cutthroat thug, it does raises some questions. On the other hand you have ARC which even Ishukone barred several of their Ikame employees from reaching the site. And of course with the way ARC is behaving to their partners when they call up on how ARC is permitting Sansha and Cartel affiliated individuals to jeopardize the effort…then all that makes one to pause and contemplate right? Practicals on the one hand, Liberals on the other…what can one salvage? This is also why we went directly to the parent companies…”

Journalist “Does that mean that if however Ishukone demands one of the three corporations to accept you, as a prerequisite for you to have access in Semiki;you will back down?”

Sepphiros: “The possibility is very likely yes. Although your hypothetical question will get a hypothetical answer, given how we dont know if we will ever receive a response from Zainou Biotech and what the terms are. With that said, it is very likely that the way you phrased it in terms of most tolerant to least, HECON as HECON alone would be no problem, I-RED we comment them for their general stance overall as an organization and in Syndicate, but all of a sudden dealing openly with criminal entities the likes of CODE affiliates…lets say we would need to sit and talk. As for ARC…well…its self explanatory I believe.”

Journalist: "Has Aliastra raised any concern over how you have offered help to Zainou as well as them?"

Sepphiros: "Aliastra is a standing up Gallente corporation that operates under the binding laws between the State and the Federation. They have never showed to us openly at least that there is any sort of hard feelings or suspicion directed to the State. And knowing CEO Etaurtetel Ruyt of Aliastra, I know that she stands into an effort where we can all help improve the lives of people affected by this crisis and of New Eden. Please dont make me refer to any political ramblings from the Senate and some Senators…this isnt the place…"

As Sepphiros seems to be referring to a Federate issue.

Sepphiros: "To wrap up, we are still waiting and extending our hand to everyone that wishes to operate under transparency at all levels. And even if Zainou Biotech or any other Caldari corporation might not accept us because we are not part of their faction, I want to ensure that SICH, under the correct format that respects New Eden as a whole, still wouldn’t mind share our research effort and findings.

Thank you all for coming!"