Today the system of Skarkon has become the target of Triglavian invasion, with EDENCOM and Triglavian fleets already facing off in the region. Traditionally, the Bosena Accords has moved to meet any Triglavian invasions in Molden Heath to provide emergency aid, evacutation, and limited defense for planetary civilian populations. We have a number of troops that are already veterans of the Muttokon invasion that have developed effective defensive strategies against the triglavians that we hope to apply to the ongoing invasion. Having said that, the invasion on Skarkon places us in an awkward position.

Over the last several months, the Bosena Accords and allied groups including the United Neopian Federation have carried out a war against the Krullefor Organization and Seykal Clan on Skarkon II in an attempt to pacify the Heath and curb some of the violence and subversion seen there. Since then, the conflict has expanded dramatically to include several outside factions with their own stakes in the Skarkon Civil War.

There are a lot of “guns in the valley” sort of speak, and a number of those guns are currently preoccupied with shooting eachother rather than focusing on the immediate common threat that the Triglavians pose. Compared to Muttokon, Skarkon is a vast and densely populated planet with substantially more major population centers. Unlike other densely populated planets that have fallen to Triglavian invasion, however, Skarkon remains a low-security system and is unlikely to have a strong enough EDENCOM / AEGIS presence planetside. In all likelihood, it will require a coordinated effort between all factions on Skarkon II to ensure the common defense of the planet.

This in mind, I have a simple solution for all of us planetside while EDENCOM and allied capsuleers preoccupy themselves with ensuring space supremacy. I hereby suggest a ceasefire for the duration of the invasion and instead form a united front for the defense of Skarkon II.

The three primary conflict zones on the planet will be split into the following occupation zones:

It is of the utmost urgency that we coordinate a rapid response to this invasion. I therefore challenge the following parties to come forward immediately join the Bosena Accords and ArSec to commit to a ceasefire and joint defense initiative.

I can assure you in advance of the Bosena Accords and the UNF’s commitment to these terms and our intention to uphold them until the end of the invasion. We remain friendly with local autonomous militia groups that have taken up administration of local governments in our wake, and will work to ensure their cooperation in the ceasefire. If we work together, we can keep triangle boots off Skarkon dirt and hopefully be back to killing eachother again before the end of the week.

Is there any way the pilots of Alexylva Paradox can help? I know how much Saede cares for her homeworld, and no doubt she’ll be posting in this very thread.

The corporate pilots and mercenaries of Alexylva Paradox have been directed to assist EDENCOM forces in fighting the Triglavian threat. While we are a small research corporation that can’t spare many pilots, those we do have are veterans of wormhole conflicts or skilled technicians and scientists in their own right. If you need specialist T2 or T3 hulls, or some other force multiplication in dealing with the Triglavian invasion of Skarkon, please reach out to myself or Saede Riordan.

Addendum on political situation in Origin per this news article. Our offer of assistance stands resolute.

As Streya has stated, following the public referendum, Origin and the Alexylva Paradox will be siding with EDENCOM in the Triglavian conflict.

Our first operation on this front will be rendering aid within Skarkon and other threatened systems of Molden Heath in order to protect our kin living on those worlds. While Empire loyal capsuleer forces have focused their defensive efforts on core worlds, many outlying systems are being threatened and do not have the local support or resources to repel those invasions themselves. In concert with various allies, the Alexylva Paradox will be attempting to provide aid within these threatened systems.

We will also be continuing to deploy Slingshot scanning pods onto populated areas of planetary surfaces and stations in an attempt to reduce the total fatality count in the event of a Triglavian mutaplasmid event or orbital strike occuring. We’ll begin running defense fleets in short order so please contact us if you would like to be included.

At this time I would like to announce that we have reached an agreement with the local Angels underboss on Skarkon II, “The Devil You Know” as the locals know him. He has hesitantly agreed to our terms of ceasefire and pledged local Angels cooperation for the duration of the invasion following the Krullefor’s expulsion from Sa’kak yesterday evening.

We have yet to receive correspondence from other representatives at this time, including Kril Efrit. Regardless, we will continue to focus on the Triglavian invasion at hand.

A small fleet formed up to make a stand in the defense of Skarkon. While fewer in number than hoped, all of the pilots I spoke to agreed that hadn’t stopped our small but stalwart corps in the past.

Upon entering Skarkon we warped to the Republic Parliament Bureau in system after detecting a Triglavian roaming gang there, and desiring a cleared-ish staging point for pilots who would join later. 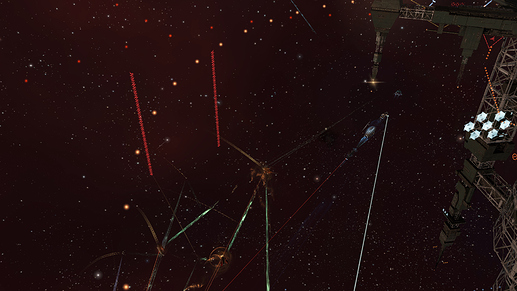 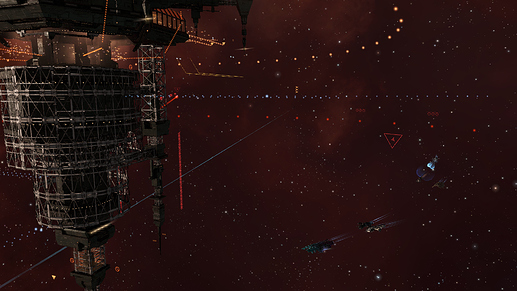 Then, we set sights on the Emerging Conduits we were confident our gang could handle. The hunt is ever afoot. 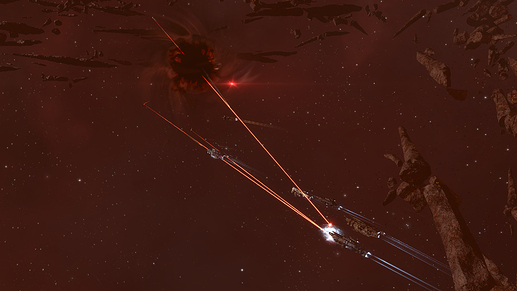 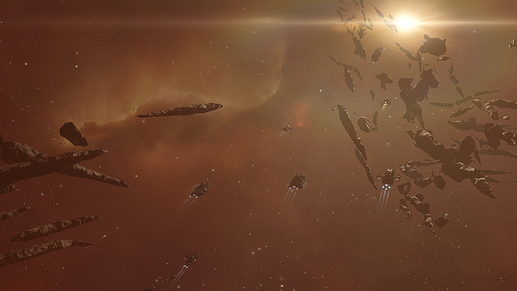 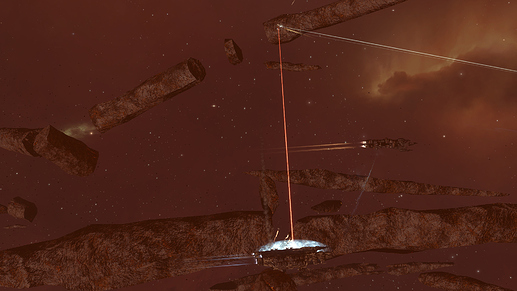 Finally, after two hours of continuous fighting the balance of power tilted ever so slightly in favor of EDENCOM. The only other capsuleers presents in system were opportunistic salvagers. ALXVP deployed Slingshot Scanning Devices into a suborbital trajectory while aiding a Republic EDENCOM squad in orbit about Skarkon II. 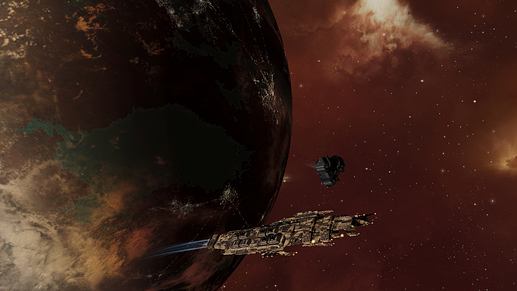 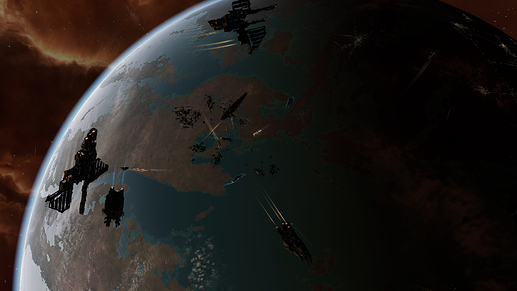 Search and Rescue of downed Republic EDENCOM ship crews was also carried out after the orbital clash near Skarkon II. Salvaging operations were conducted to reduce orbital debris. Evaluations are currently underway to more efficiently clear space of Triglavian ships. Current thoughts point towards a composition geared more for damage than defense, but for anyone else who will come to Skarkon’s aid we will be staging in nearby high-security space (Lirerim and Hek namely). The fight against the Triglavian threat in Skarkon will undoubtedly continue for some days.

No Triglavians, no EDENCOM, not a single looter in sight today. Skarkon is silent like a sleeping baby. It seems everyone is gone elsewhere, for now?

No one claims victory either.

No Triglavians gene bombing the planet and installing their own regime? No EDENCOM fleet putting us uncomfortably close to SARO / DED or more RSS troops? Gods and spirits, this worked out better than even I could have hoped for.

Well, very many thanks and congratulations to Khumatar Efrit for what must surely be a reward for his managing of the situation! It seems that your strategy of not coming to the table whatsoever on this and leaving us to fight the Triglavians on our own has really worked out for us in the end. I’m sure the people of Skarkon II will be pleased as punch to now be governed by an RSS spook that has now directly endorsed the Krullefor, and actively refused to contribute to the common defense of the planet against the Triglavian threat in favor of… I guess packing his bags out of his fancy villa in Matar?

It does look like Skarkon was abandoned as an invasion locus for the Collective after some days of their efforts being thwarted, the system slightly favoring EDENCOM. Much thanks to Electus Matari and Phoenix Naval Systems pilots, among others (“The Allied Fleet”?) I saw in Skarkon local. Apologies to anyone I gave small heart attacks to with my Sisters Combat probes while hunting lone Trig ships separated from their fleets! By the end of it all the gang ALXVP, Bosena Accords, and UNF had assembled was too small to do the heavier lifting, and it was a pleasant surprise seeing a major Matari corp like EM show up for the clans of Skarkon.

Apologies to anyone I gave small heart attacks to with my Sisters Combat probes while hunting lone Trig ships separated from their fleets!

Skarkon has once again been invaded and is leaning toward first liminality. Moreover, as of 1600 EVE time the system has experienced intermittent drops in communications that may point to a future blackout. I would strongly suggest at this point that should the worst come to pass and the system falls to the triglavians reexamining the possibility of a ceasefire rather than planning another bloody skrimish for Ishohuolvi. 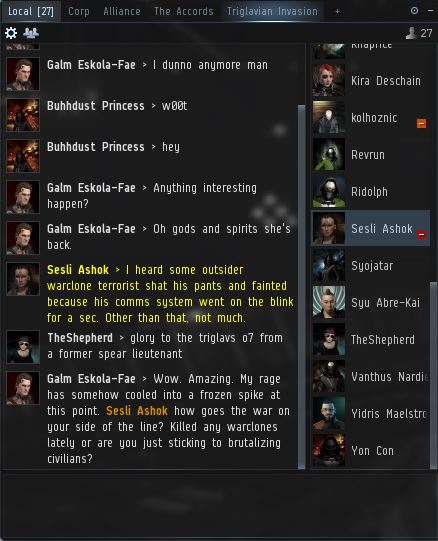 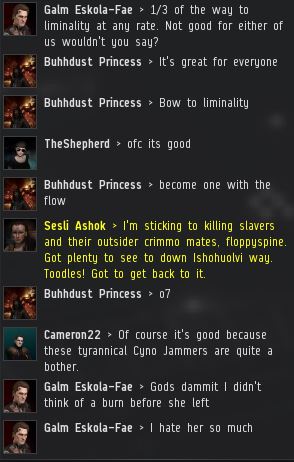 Unless you’re hiding another battlefleet in your back pocket @Sesli_Ashok save us both the biomass and civilian lives. Instead of throwing eachother into the meat grinder over CBD land lets, at least temporarily, come together if nothing else for our shared humanity and combat the triglavians if the system flips to the triangles.

You aren’t leaving us a lot of choices here, and I’m not eager to spend warclones fighting you when there are civilian lives at stake in Ishohuolvi.

Unless you’re hiding another battlefleet in your back pocket @Sesli_Ashok save us both the biomass and civilian lives.

You good? You awake? I don’t mean to complain, and I don’t know if you’ve noticed, but it seems like the Trigs are gaining ground here and Skarkon has fallen to first liminality. Unless you want to bury your people under a black sun, I strongly suggest you either find the rest of your fleet that we didn’t smash and put them to good use or work with me here.

Don’t get in her way and you will be fine.

Receiving reports of Triglavian troop landings on Skarkon en masse. At this point, I am making an executive decision on behalf of the Accords based on the general direction of debate in the Round Table.

We are holding fast on Skarkon. Noncombatants will be evacuated while warclones will remain under orders not to fire on Triglavian forces unless fired upon. I will be commanding from the front while Thaddeus Reynolds will be acting on our behalf in space to lead evacuation efforts. Any reports or orders from him should be taken as word from the Warden.

No it didn’t. I was very saddened that they not only came back, but won.

The main joint operation to evacuate civilians concluded a bit ago. There will be smaller runs over the course of the next few days. Those who were leading the evacuation fleet will likely do a better write-up than I could give justice.