So, the zenith of the invasion is... a new set of clothes

Only if you live nearby!

The reason I give snippets of my rl is to give CCP an idea of who plays. Last I knew, the game had the highest retention rate for older and female players. It was and still, you could say, an intellectual game.

If CCP is looking at demographics that are geared for younger players who cannot handle the complexities of EVE, then I’m not sure of EVE’s future.

Only a little grey hair and I have all of it!

I have all of the grey hair, a shockingly good head of it; got a full on Grizzly Adams beard at the moment too.

YOU have a wife and children! I do not. More power to you for being a good example to your children!

CCP doesn’t come here. CCP might not even know this forum exists.

Nah, I have a better half but the kids aren’t mine, nor are we married.

Even better, same here! Her kids are good though.

CCP doesn’t come here. CCP might not even know this forum exists.

You of all people know better.

CCP doesn’t even manage the moderation here - they get vounteers to do it all.

When was the last time you saw a post from the CCP community manager on this forum? Yesterday? The day before?

Lol I’m trying to figure out where you are, from the way you spell grey you’re not in the US, so you’re either an early bird/night owl in the UK or one of our down under cousins.

Crap, you gotta pin me on that one. I would say it was 2 days ago? Not as good as the old days buy better than nothing in my eyes?

You spell grey properly, not the bastardised version you Americans normally use.

Americans use both spellings.

That I didn’t know, I’ve only ever seen gray from people in the US.

You live and learn.

color/colour is a much better indicator.

Oddly, Americans still spell it clothes, even though they pronounce it cloz.

They wear their pants on the outside though, and lets not get into words like fanny which us Brits find amusing as hell. 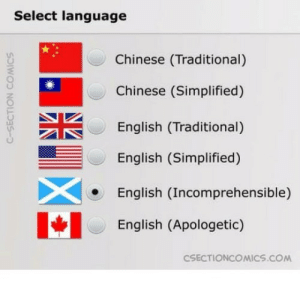 Aussie English is fun too, they wear thongs on their feet…