State of the State: Timeline and geography of Triglavian activity and EDENCOM responses in Caldari territory

as the state of the Caldari nvay vis-à-vis the Triglavians has come under heavy criticism and the subject of controversy over the last few days, I thought it may be a good idea to take a more organized look at the state of the Triglavian activities in Caldari space. Again, I will not speculate on the reasons for certain decisions or outcomes and just present the data for the readers interpretation.

In the early phase of the current pattern of Triglavian activity, the State managed to find their so far only victory for the EDENCOM forces in the system of Samanuni which was built up into an EDENCOM fortress. But even then there was already a certain pattern of Triglavian dominance with Collective forces achieving minor victories in the systems of Inaya, Vaajaita and Hikokken. But at this point most attention was focused on the liminalities in Raravoss and Vale and as such, minor triglavian successes were not at the center of attention. Furthermore, EDENCOM could claim that they had achieved a lot more victories then the Triglavian forces and probably weren’t keen on discussing underlying patterns.

(Further reading on these disparities can be found in my analysis here, even though the data was taken at a later date: Analysis of Invasion Outcomes (Empire based differences AND Balance-of-Power-Hypothesis of Liminality) )

The major inflection point on activities of EDENCOM and the Caldari State Navy in their defense of State territory came on the 14th and 15th of June with two systems reaching final Liminality in rapid succession. On the 14th, the system of Sakenta reached final liminality. In addition to being in the heart of the States territory, it is also only 2 jumps from the major capsuleer tradehub of Jita. While it is a dead-end-system, there are worries about the effect on trade security going forward.

On the 15th, the system of Nalvula entered Final Liminality, the first to do in Low-Security space. Both systems also fell rather rapidly, with neither of them taking more then barely two days from the appearance of Triglavian forces until final Liminality. These events lead to civil unrest and widespread mobilization on the side of the Caldari forces as described in the Worldnews here: https://community.eveonline.com/news/news-channels/world-news/galactic-hour-news-roundup-triglavian-conquests-and-edencom-fortresses-edition/ and here: https://community.eveonline.com/news/news-channels/world-news/galactic-hour-news-roundup-gallente-federation-day-yc122-edition/

The grand announcements of resistance and mobilization were however not met with success in the further conflict. While there was a brief pause for Triglavian activities within Caldari space after the two Liminalities, maybe to regroup and secure those systems, once the Triglavian presence returned, the outcomes were arguably wose then before.

While I do not wish to speculate, there may have been morale effects for both sides and I can report a high motivation from Pro-Triglavian circles towards the prospect of State targets under the assumption that they are seen as ‘softer’ targets compared to other empires that can be secured with comparatively less resources.

Triglavian Minor victories were achieved nearly daily in the aftermath: Obe on the 18th of June, Kulelen and Piekura on the 20th, Nonni and Akora on the 22nd, Pakkonen on the 24th and Taisy on the 25th. Triglavians have as such established a stable space presence in many Caldarian systems.

And while the Minor Victories did not gather cluster-wide attention, some of them were in important systems, which is notable. Two examples I want to provide with special attentions are Nonni. This system is the Home system for one of the “Big 8” megacorporations, Kaalakiota. Triglavians having a high freedom of movement in that system may have tactical consequences in addition to the morale damage to the citizens of that corporation.

Wider concern was reported throughout capsuleer circles about the capture of Taisy, which is home to the infamous Kyonoke pit. While I personally do not think that Triglavians have any need (or propensity to use) biological weaponry, others have suggested that it was a priority to defend and criticized the failure to do so. (Further reading: https://community.eveonline.com/backstory/chronicles/kyonoke-pit/ )

In addition, there are currently Triglavian and five systems with Triglavian activity in close proximity (obe, Vaajaita, Arvasaras in addition to these two). It will be interesting to see if the triglavians will try to fortify these constellations further. Currently there are recon-forces in Uchoshi, a system in The forge that shares a constellation with Obe. This leads me to the second part of this small brief:

I have taken Tactical Map data for Caldari regions from public providers and added the current state of triglavian invasions into them. Only systems with a stable outcome are marked. A single Triangle marks a minor triglavian vitory, three Triangley a Final Liminality. A simple square would demarcate a minor EDENCOM victory, if there was one and a square with added battlements marks an EDENCOM Fortress. 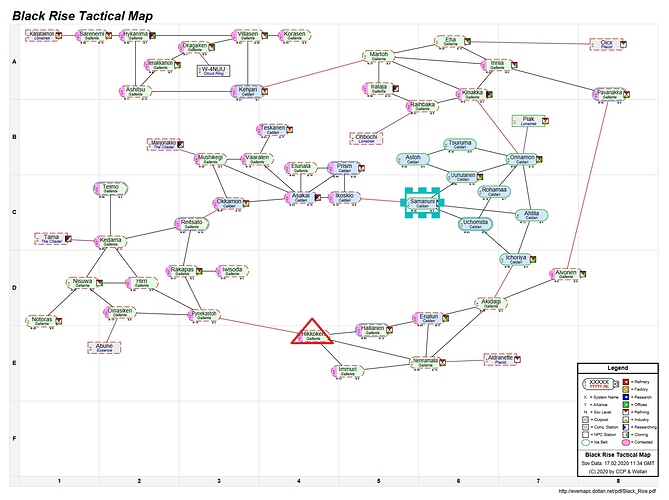 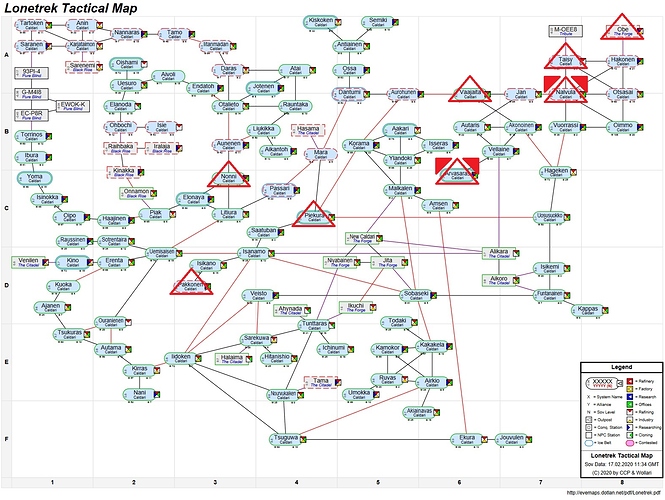 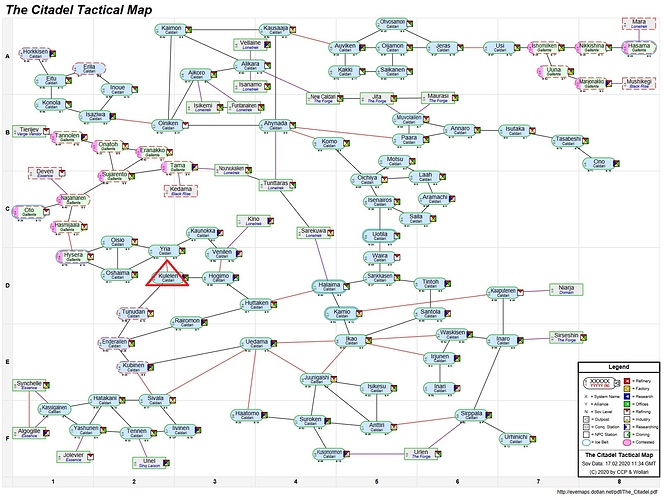 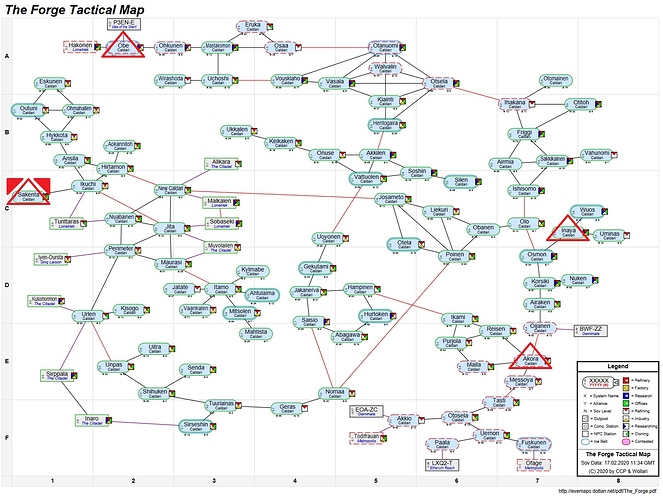 I may follow this up with further analysis at a later date, but I will not make any promises as I have been quite taxed with different priorities over the last few days and still haven’t come back to some of the open conversations where I had promised to do so, for which I again apologize.

What a disaster. The beautiful State will become a hive of Triglavian activity at this rate. EDENCOM has thrown the Caldari under the bus.

Oof, really doesn’t come off any easier when you put it that way. Still, thanks for the neutral assessment, always glad to have one around.

One thing I’m noticing is that besides Sakenta and Nonni, most are well off major trade routes, and even then the two are possibly a bit more ‘expendable’ than I’ve found non-Caldari willing to swallow. It’s… a bit of a cultural thing. Some of those systems are really out in the Boonies–most of Lonetrek and Black Rise are not ‘prioirities,’ especially the lowsec areas–with perhaps the exception of a massive presence as Sam, where you’ve got the worry of lawlessness spreading to a system they actually patrol. But Hik? When the Navy’s gotten into a massive engagement in Nennemalia? Well, there’s a place to commit ships and resources, and it’s what the commanders say that goes.

I’d sincerely hope there’s a much better showing in less… remote systems. Anything near Jita again will have me tearing my hair out. Already had enough shouting matches once.

While I stand by my assertion that God has subjected the Caldari to one of His many trials for them to overcome, I don’t think that EDENCOM is really making it easier on them. I wouldn’t be surprised if it’s staffed with Federation sycophants once you pull its layers away, purposely not preparing their State defense forces as well as the others.

That is a lie. Not Edencom threw the state under the bus. Only the state and its incompetent military is to blame. Other Navies fare much better against the foe, like Amarr in particular but Gallente as well. It is time that Edencom does away with individual navy responses in the individual empires. Instead, Edencom should combine the strengths of the Navies.

Edencom should combine the strengths of the Navies.

That idea is rather absurd, if I’m being honest.

There’s a lot of conflict between the empires. Even if you look beyond the idea that the navies would likely generally fight harder for their own homes than for foreign lands, you run into the roadblock of the hostilities between empires from various longstanding serious issues.

For example, you couldn’t trust the Imperial Navy to dutifully defend Republic space in one system while the Empire is still involved in its own disguising slave-taking invasion in another.

You think people distrust EDENCOM now? If it ends up doing something that stupid, almost nobody will ever trust any CONCORD efforts ever again.

EDENCOM simply needs to siphon some of its own resources away from the Empire and to the other powers to the point of ensuring each member state is equally able to defend its territory.

isn’t that the same what I suggested? Maybe in a less comprehensive way than I wanted it to materialize but bringing neuts, tracking disruptors, damps, better webs, and especially in the case of Caldari, better target painting to all fleets against trigs. And their ship need to get better at tanking them.

One way or another, if the current trajectory isn’t corrected, the State will be in a very dire place.

An entropic disintegrator is basically a more efficient, interesting blaster.

The Caldari have been preparing for, substantially, this fight for a hundred years.

And their ship need to get better at tanking them.

Actually, the State’s vessels have a fine resist profile for fighting the invaders. The ships only tank capsuleers exploiting the EM hole poorly.

Doesn’t look like that to me. These Majorana missiles deal a ton of EM damage, too.

Not all Triglavian ships carry Majorana missiles. Only the ones designated Liminal do.

That is a lie. Not Edencom threw the state under the bus. Only the state and its incompetent military is to blame. Other Navies fare much better against the foe, like Amarr in particular but Gallente as well. It is time that Edencom does away with individual navy responses in the individual empires. Instead, Edencom should combine the strengths of the Navies.

I’d say the Minmatar deserve an honorable mention. They are the smallest Empire, with by far the least resources, and yet they manage not the worst performance. By a rather large margin, in fact.

I lament being unable to call them this due to the obvious reasons, but had they been an ally to the Amarrian empire, I would be proud to consider them as such. They possess fierce fighting spirit and ingenuity to make up for their lack of functional economy and their primitive technologies.

I lament being unable to call them

Not with that attitude, at least…

He definitely needs to up his complimenting game if he wants to get anyone’s numbers.

hi can you update this map please? very useful much appreciated

You were doing so well, three whole lines before you derailed, the Imperial Navy can be trusted to do as they are instructed, slave-taking irrespective of how disguising or presumably disgusting? Has little bearing upon that; the more pragmatic and frankly more obvious reason is that with all nations under attack, each are likely conserving their forces, this is all the more important in consideration of our uncertainty regarding how long the Triglavians may be able to sustain this campaign.

The solution you pose is either disingenuous or ill-conceived, after your dogmatizing about mutual mistrust you suggest resources EDENCOM does not have be routed from the Empire to the other nations, you would bleed the Empire of resources while it bears the brunt of the Collective’s invasion? Or do you believe EDENCOM themselves to have armadas they are yet concealing from the rest of the cluster?

No, Yassavi, but at the time of the post you replied to, EDENCOM forces weren’t even building ■■■■■■■ Gunstars outside of Amarr space.

They are now, thankfully. But continue to call me disingenuous. I’m used to your projection by now, slimeball.

Things like the former Gunstar issue don’t happen when an organization is impartial.

The solution you pose is either disingenuous or ill-conceived

Ill-conceived then? Though I would like to note that the difference between calling you disingenuous and positing that the solution you offered may be, is more than merely a technical one.

I would like to note that the difference between addressing the actual point and trying to make a witty retort about what you meant by ‘disingenuous’ is more than a technical one.