Uh solo PVP? As in, fighting and finding players, not npcs? Just because a game is multiplayer doesn’t mean you should have to have allies, especially when it’s enforced by npcs.

Do they target anyone? Or does it depend on your security status?

Makes sense for FW to have some form of mechanic that makes it harder for the enemy to operate in space.

If you want to avoid the faction police, just become a neutral pirate. More targets to shoot anyway and sec status is not really an issue anymore since you can always tag it back up when you want to end your pirate career.

Uh solo PVP? As in, fighting and finding players, not npcs? Just because a game is multiplayer doesn’t mean you should have to have allies, especially when it’s enforced by npcs.

Realistically, you don’t HAVE to gang up. It’s just a lot easier, because the game is balanced around massively multiplayer concepts. If they make it work for solo, how would that work for gangs? There’s more gang stuff than solo stuff, so it makes a lot of sense as to which gets supported.

As if this needs to be explained to you…

Is this a new feature or something?

Yes, it is a new feature.

You have most of faction warfare filled with bots as an older “feature” and now these Instalock 50 + npc full fleets that do not drop anything nor give lp etc that pod kill as the newest feature. They all re spawn shortly after being killed

yes that is understandable for the roleplaying aspect but when you do not role play or are not in FW and they still attack you even with decent standings towards those factions it is a joke.

You’re not independent, or isolated, from whatever else is going on in any other sector of space. You get killed, because you are there. Who you are, what you do and what you want is of no matter.

We are not. I’ve never been in FW either.

How are your Amarr / Minmatar standings?

You’d think this is a whining post about pirates ruining my day… it is not! In fact, I am the pirate ruining said day. Well, I was. I can’t leave the station anymore, due to NPC gatecamps. I’m not even joking. Look at this glorious killboard: https://zkillboard.com/corporation/1000084/
Some information for those not in the know: Amarr and Minmatar ‘navy’ fleets are currently camping gates all over lowsec. These guys instapoint and instagank, faster than even Concord does. As you can see from the killboard, even frigates get tackled loads of times. Basically, if there’s a gatecamp anywhere, that gate is permanently off limits. They happen to camp pipes though… so I can’t even get from Amamake to Kamela.
CCP… What the ■■■■ is this? I’m literally forced to cyno EVERYWHERE now. Are you actively trying to kill lowsec?

OK, so I just wanna make sure I have things straight here before I comment further because you didn’t put everything in your post but put some stuff later in subsequent replies.

BTW, I am an ex camper also but from wayyyyyyyyyy back in the day, so a lot of things are different now, so my thinking of it can be wrong due to being so outdated.

OK, so just to clarify. You have positive or good sec status, you are neutral, not in FW, and you have positive standings with the actual Navies. Not the faction (for example Amarr or Gallente) but the actual Navies, liek Amarr Navy, Khanid Navy, Caldari Navy, etc. You have good faction with them, and through all that, they still agro you and tackle and kill you without you engaging them first, or engaging any player which also has good standings to those Navies first. Is this correct ?

Please clarify this. This is important.

But if you tag a player that also has good status with them while in their range, or you are missing either sec status, or faction standing or navy standing, then you are fair game. That’s how I see it.

Why are Bots ok as long as its CCP that owns them?

so adding NPC bots that kill players is a great idea!

Please tell me more about this glorious battle you envision, especially given the fact that they one-shot tanked Drakes… 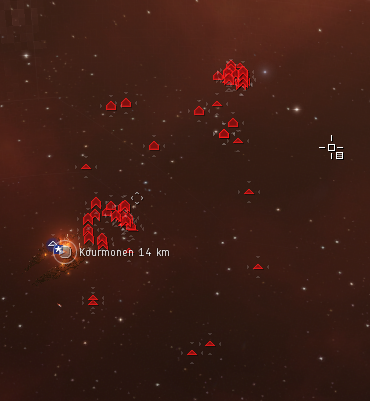 They just quickly respawn. No drops etc. Just a waste of ammunition You cannot clear them out so to speak…

They just quickly respawn. No drops etc. Just a waste of ammunition You cannot clear them out so to speak…

That’s true. Just responding to the claim that they cannot be fought because they are so OP by pointing out that it’s been already done.

(I am not particularly worried about these particular NPCs myself because I assume they will not be a permanent feature in this particular form anyway. I find it cool that what’s in the storyline actually is having some actual effect in the game world too.)

That I agree with. Just responding to the claim that they cannot be fought because they are so OP by pointing out that it’s been already done.

Faction warfare is 70% bots… they are everywhere. CCP banned some 2 weeks ago and like roaches they are back.

This… “feature” which includes NPCs Pod Killing players is not helping low sec or FW… based on many conversations with many low sec players.

I agree. OP hasn’t posted many details. Is this NPC group ganking at will?

We had this before with the drifter incursion and the roaming navy fleets, they were ignored untill you removed them.

What are you triyng to do here?

Because they stand in the way of your goals?

This is fw lowsec we are talking about.

I guess not getting wrecked? Maybe use a neutral scout to see where the blockades are. Haulers do that in high sec, what makes ‘you people’ so special you don’t need it in low sec?