Project discovery allows players to submit material to CCP which they then hand off to a 3rd party for the various campaigns that have been run over the years. This tool could be used to shorten development time for specific things that have low technical requirement, like what I’m going to propose in this post.

What is the purpose?

If CCP is going to make a shooter that allows us to fight in ships and structures, they need the geometry for those things mapped out ahead of time.

Designing the interior geometry in a way that will make sense will be time consuming for CCP to manage, but there is an easier way to go about this by crowd sourcing the design of the general layout to the players. 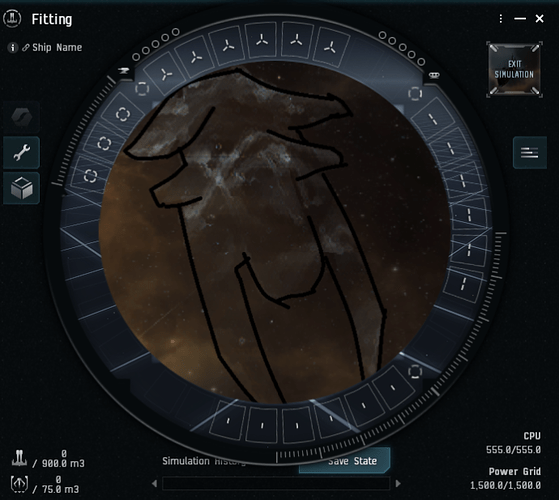 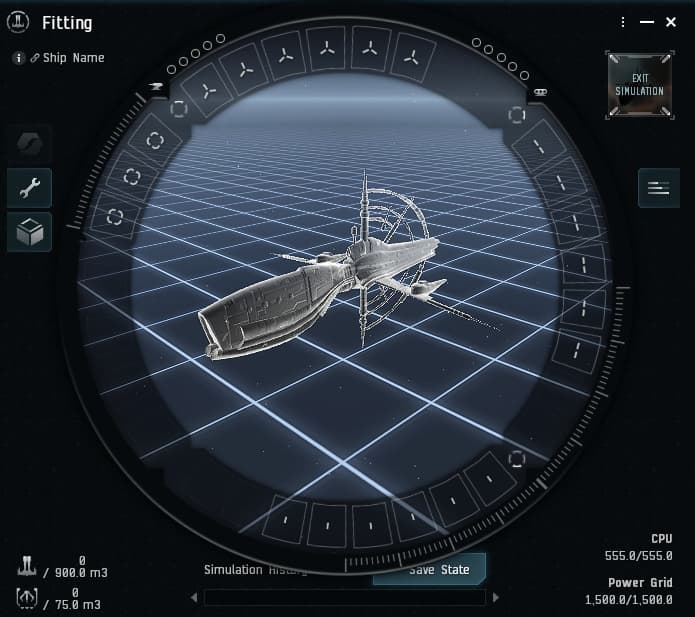 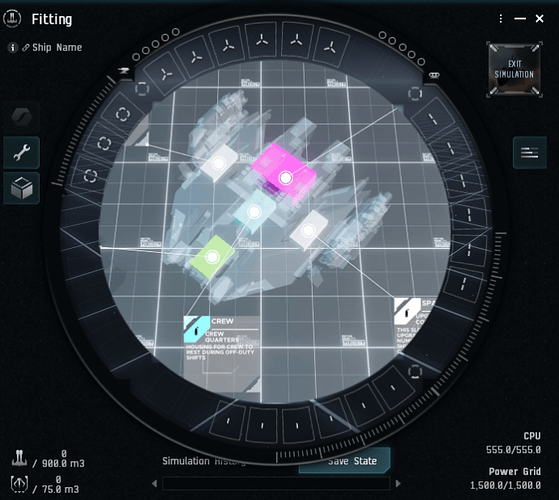 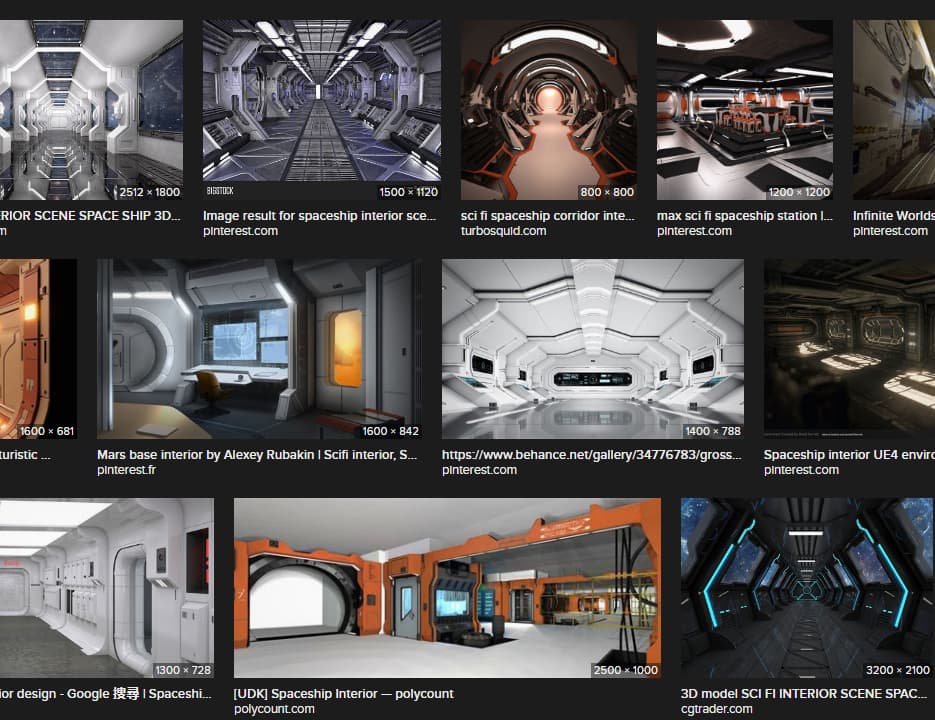 What should CCP do with the ship interior designer after CCP receive all the assets they need?

Overall, I believe this addition will speed up development time by outsourcing part of the workload to the player base. Also, when game balance updates hit, (just as a nerfed or increased cargo hold) CCP can push out a redesign request to the community through the ship interior designer to avoid having to spend development resources on it.

Ah yes, I remember when they had the captain’s quarters.

Honestly I think the level of effort you have put into this is fantastic.

I’m totally sure there are several hundred eve pleayers that are completely capable of creating new environments for the game.

CCP removed the captains quarters. A fully realised environment on it’s own. While there are people capable of creating these environments, CCP have pretty much made their views known that in station environments are VERY low priority.

Personally i really liked being able to view my ship from a balcony and sit n a sofa and watch new eden TV. Seemed better than ship spinning. I totally understand CCPs view that the game is about spaceships though.

EVE will never be The Sims, no matter how much some people want it to be…

Honestly I think the level of effort you have put into this is fantastic.

I’m totally sure there are several hundred eve players that are completely capable of creating new environments for the game.

Thanks. I do think the proposal has promise.

CCP removed it because very few people used it. Very few used it because it was a laggy mess that had no content attached to it.

CCP is working on a shooter; they have a bunch of unreal devs on the payroll. So we will be seeing some sort of fps / 3rd person game play at some point.

All these NPCs just casually walking in stations…https://t.co/9xezYnMYsi

He wouldn’t drop that teaser if there weren’t plans to bring it back in a meaningful way considering the circumstance he’s referencing.

Give us a station environment that runs on the unreal engine so it’s actually performant, with actual content attached to it, and we’ll see a lot of people wanting to make use of that gameplay. The missions that make you “see the agent in person” will likely make you actually walk an avatar to the agent’s office, otherwise you’ll be able to accept and complete missions remotely.

EVE will never be The Sims, no matter how much some people want it to be…

Here’s the thing. There’s no reason for it not to be. I wasn’t really intending this feature to cater toward people who like the sims, (sim city is a much different game than the sims nor is a feature that takes development load off of the developers,) but if the interiors for structures and ships are created for the other planned fps gameplay, we very well could have a game play mode like the sims set in the eve universe.

Of course there’s that whole, #IWantDevelopmentFundsToBeSpentOnThingsIPersonallyCareAbout that everyone who trashes on ideas says, but a sims gameplay feature is adjacent to what CCP already has plans for. And binging in players that enjoy different genres of game is a good thing for the IP, as long as it can be done in a way that wont tank the company.

They’re working on a first person shooter? Well, what they should do is; because their entire player base is heavily PC oriented, they should totally make it a console exclusive. ZING!

CCP Iceland is NOT working on a shooter.

Its a separate team working on it. Its CCP London.

So the folks who respond here from CCP, are NOT attached to the FPS being developed

So, CCP is working on a shooter.

Things get tricky in this department :] you have to consider intellectual property as well, CCP would have to require the complete hand over of all ip on submission for it to work, also the type of people that would do it and take it seriously would not need ccp to create tools they would just use blender/max/maya or w.e and submit obj/fbx.

CCP developing tools for inside eve to do this would be very time consuming.

But besides that point, I mean if CCP had a separate team working on first person so I can dock in an enemy station get out in first person get weapons from my ship and go raid a station hell yea Im going to enjoy that but captains quarters

no. But then you have to think CCP’s engine was designed for space craft in space if you want a shooter unreal 5 is the place to go.

A super technical question is it possible to swap engines mid game as you get out your ship in first person lol… I don’t think so but not 100% sure.

If not then maybe your save game progression (or start from scratch if no eve account) from Eve can be used in a stand alone shooter(on pc obv) you drop the first person equipment off in eve and then its there ready to go in the shooter a type of combination :D. The shooter can use your eve char and same wallet / standings, could be interesting

but im just rambling at this point.

you have to consider intellectual property as well, CCP would have to require the complete hand over of all ip on submission for it to work,

That goes without saying. Anything submitted to CCP, would be their property. The most you could possibly do, would be some sort of quazi nft thing, where people earn in game assets (like lp, or those proposed interbus credits) for designs players made and then other people used. But the easiest thing is just to handle it through the project discovery system, giving better rewards for people who do a better job.

so I can dock in an enemy station

Hopefully the new fw standings situation will prevent people from docking in enemy stations. Perhaps you could drop assault clones off in your enemy station (like I propose in this post) once that enemy station hits structure. It’s a pretty decent way to handle sov capture. Mix up that structure grind a bit.

I think it probably is actually, though the load time would be a bit long. Kind of like when you initially load into a game. The client is starting up the game engine. You could of course keep both engines running, but I think that would lead to performance issues.

What I expect CCP will end up doing, is moving over to unreal 5 for the entire game eventually. That will allow them to have dynamic wrecks that actually look like the ships they came from without having to actually design the individual wreck, and destructible asteroids that break apart in a logical way.

What I expect CCP will end up doing, is moving over to unreal 5 for the entire game eventually.

There is no way of eve going to unreal 5

to rewrite all that code would be a nightmare. Also UE5 I don’t think will handle 10000 player battles as well as CCP’s engine funny enough. They have been designed for different things. Geometry/nanite wise sure but on the network side is probably a different story. Obviously I don’t know for sure I’m not an engine guy with all that technical knowledge.

For playes to be able to contribute in some way to speed up Eve’s development would be amazing for sure, especially if you can earn some cool ingame items for it.

I have been asking for ship design community challenges

and I would enter for sure but I just don’t see them.

the type of people that would do it and take it seriously would not need ccp to create tools they would just use blender/max/maya or w.e and submit obj/fbx.

That doesn’t get the assets into CCP’s hands in a timely way that can actually be used. The beautiful thing about this type of proposal, is it offloads the tedious grunt work to the crowd sourcing environment that’s already been developed.

CCP developing tools for inside eve to do this would be very time consuming.

That’s the thing right here, most of the work for the development has already been done. All they have to do in reskin project discovery, add in some code from Jessica and the probe exploration system, and then develop assets they would have to do anyway, (which would mostly just be colored boxes, sized appropriately.)

It’s true that most people wouldn’t take it seriously… but a few would. And CCP only needs one serious asset to make use of.

And once the ship interiors are in game, and people can customize their ship interiors even more? There will be many more assets for CCP to pull from that are actually seriously designed.

That’s a good point that I didn’t consider. I guess that’s something for their research department to figure out.

In that case, It would be better for CCP to create another client strictly for the fps portion of the game, that starts up when the EVE client initiates a start up trigger. On top of the full integration aspect, they could include a dust style battle arena, so it can stand on its own as a game in its own right.

In that case, It would be better for CCP to create another client strictly for the fps portion of the game, that starts up when the EVE client initiates a start up trigger. On top of the full integration aspect, they could include a dust style battle arena, so it can stand on its own as a game in its own right.

Haha, yeah. I remember when CCP initially announced dust, and the community members kept hounding Hilmar to put it on pc. I understand why they did it, Sony paid for a lot of (or maybe even all of) the development, so for CCP, it was more or less a testbed to see if a shooter was viable.

That said, I do believe its been mentioned somewhere it will be on pc this time.

This is a super idea that would bring new players to the game. Keep up the good work!

It should also be noted, CCP should still have the assets from the racial Captain’s Quarters too… so there should be minimal work to get those assets available to use in ship and station interiors for the above conceptualization.

For those who haven’t experienced CQ and would like to take a gander, you can find a basic walk through here: Minmatar, Caldari, Amarr, Gallante.

Notice how they all are using the same basic geometry, just reskinned with the racial skin packs.

They also had all the items which linked eve to dust I remember seing all the equipment and stuff in the market.