for the record i see this from producer perspective, some subsystems are selling way better than others.

you can look at market data and the ammount of items put on the market. I assume supply and demand is more or less equal.

in case of deffensive subs there are always same 3 options with different names:
covert ops
buffor tank
active tank
but covert ops have almost the same bonuses as active tank on top of covert ops cloaking: 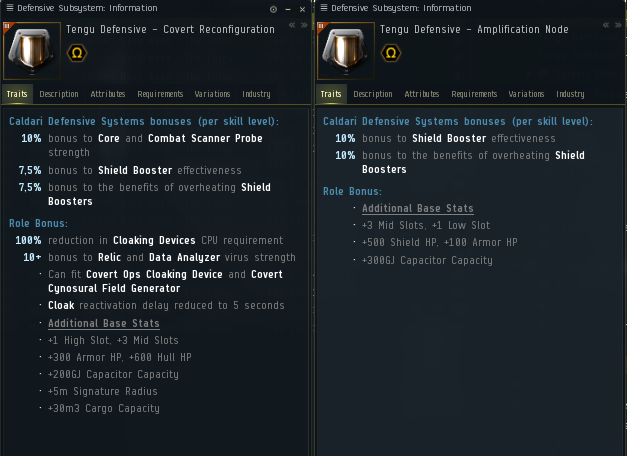 and buffor tank is rarely used for some reason

my idea is to specialize other subsystems much like covert reconfiguration gives you covert ops cloaking, i think it would be good idea to give buffor tank deffensive subsystems ASSAULT DMG CONTROL module (possibly some debufs to ballance this module)
and buff stats of active tank subs cause i dont know how to make them more interesting

but covert ops have almost the same bonuses as active tank on top of covert ops cloaking:

Maybe at first glance but the devils are always in the details. For covert, the shield bonuses are smaller. The cap is smaller. That all leads to being noticeably different in tank. Slot layout makes a noticable difference. So to say they are almost the same isn’t entirely accurate. They are different enough to fit different situations fine.

and buffor tank is rarely used for some reason

First off, I have no idea what a buffor is. But I question your research into knowing how little the buffer tank subsystem is used.

For example, my quick research is far from extensive or perfect. In looking at kills that involved large numbers (aka fleet fights) pretty much all T3’s were fit with a buffer tank. That would be what I would expect that subsystem is designed for.

Overall they seem fairly well balanced at the moment. Given how hard T3’s are to balance in the first place I dunno if it would cause more issues to try and do something more with it.

And that is going on the assumption that your assertion is actually correct, which I’m not sure I agree it is.