The Application Of Laser Weld Defect Analysis And Other Engineering Methodologies To The Study Of Archaeological Remains In Conflicts Involving Amarr Forces: A Discussion

This paper discusses two engineering methodologies for dating and interpreting archaeological sites both planetary and in space, and the reasons why the archaeologist may wish to employ these methods when investigating a site.

There are many archaeological sites within New Eden, which have been poorly documented, unintentionally or otherwise. Proper documentation and interpretation of these sites is vital to gaining a deeper understanding of historical conflicts, such as the Amarr-Minmatar conflict, and the various small-scale conflicts, such as existed in the Bleak Lands, between Imperial and non-orthodox civilisations.
A particular problem faced by archaeologists working in areas where Amarr influence is present, is that the laser weapons predominantly used by Amarr cultures tend not to leave particularly obvious physical evidence of their use. There are no spent ammunition casings, no embedded projectiles, no traces of exotic particles, or the other markers as used by projectile, rail, or blaster weaponry.
However, there are some physical traces that can be recovered from archaeological sites, and used by the adept archaeologist, to contextualise a site.

The use of laser weapons in space environments provides evidence that is usually well preserved unless disturbed by scavengers or astral phenomena.

The evidence of particular interest, are the patterns of laser debris on damaged hull & armour plates, which can be analysed using techniques similar to those used in engineering to analyse welding defects, as laser weapons operate on principles similar to the “keyhole” mode of operation of energy beam welding machines.

One item of significance is the ejecta of molten material from the site of a laser strike, as this can be analysed to estimate the energy present in the laser beam at the time of the strike, which allows the weapon involved to be identified in many cases, and in some instances will allow the identity of the vessels involved to be determined.

The length, width, and linearity, of a laser strike mark on a sample are other characteristics that can be measured, and may on occasion give insights into the relative motion of the firing vessel at the time of the strike. S-shaped strike marks are an indication of the target vessel performing evasive manoeuvres at the time of impact, for example.

A comparison of the length, width, and quantity of ejected material of a laser strike on a relic, with the marks produced by laser strikes of known energy from a test laser, is a method that can be used to identify the class of laser that struck the relic.

On planetary environments, the evidence is generally less well preserved, due to weathering of the materials by atmospheric conditions, however in most cases, the same methodologies can be used to measure laser strike marks on metallic relics, albeit with a reduced accuracy and certainty.
On concrete or stone relics, such as buildings and fortifications, the energy of a laser strike may be estimated through the measurement of pits and craters on surfaces, left behind after the vaporisation of material by the laser. There may also be areas of an obsidian-like material, where silica has been melted and solidified. Calculation of the energy involved to achieve this is straightforward.

Once estimates of the energy of a laser strike have been made, they can be referenced against tables of energy per shot of the numerous models of ground and space lasers produced by Imperial Armaments and other Amarr manufacturers, to find a match for the weapon involved.

Historical tables of organisation and equipment can then be consulted, to determine which ships, ground vehicles, or infantry units, carried particular weaponry at which point in time, which may allow dating of an archaeological site in the absence of any discrete chronological evidence.

The other engineering method that is useful to the archaeologist, is the isotopic analysis of radioactive materials, as typically used in atomic fission power sources.

For a typical Minmatar reactor, the fissile material is in the form of fuel rods in the reactor core, consisting largely of high grade uranium, though thorium and plutonium reactors may also be encountered.
Other designs of reactor that may be encountered use fissile fuel in the form of small pellets, rather than large rods.

The reactors of archaeological sites may be damaged, so extreme care should be taken to avoid radiation exposure of personnel and equipment.

Assuming the reactor on the site has been made safe, samples of the fuel may then be extracted, and the composition analysed, to determine the isotopes present and the ratios between fissile material and decay products.

It is then straightforward to calculate using radioactive decay half-lives, to provide estimates to within a decade or so, of the time when the fuel element was assembled, which gives an upper estimate of the time when a building or ship was constructed, though a degree of uncertainty may remain, as the fuel elements may have been salvaged from an old reactor to use in a newer one.

These two methodologies, taken from the fields of production engineering and nuclear power engineering, may be employed by the archaeologist to establish likely dates for archaeological sites, in the absence of other evidence, with a reasonable degree of accuracy, as well as providing additional context to the site in the form of educated guesses of the forces present at the time.

Other engineering methodologies that may be used to provide synergy with archaeological investigations may exist, and the enthusiast is encouraged to seek such methodologies out.

Did you want to submit this to this year’s writing contest?

An archaeological survey in Nimambal located an object discovered in deep space past the orbit of Nimambal X.

Object was revealed as the wreck of a severely damaged Rifter class frigate, identified as a wreck of a Vindication Wars era Rifter

Wreck had no significant debris cloud associated with it, other than small debris consistent with micrometeoroid impacts. No artificial debris was detected within 3 AU of the wreck’s position, suggesting the wreck may have still been under manoeuvring power after separation of the missing components, and had travelled considerable distance under power since separation. 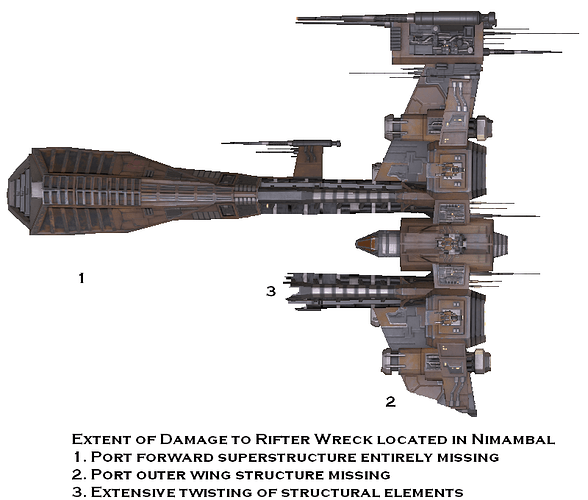 No other distinct identification marks found.

Several clear and distinct laser strike marks were identified.
Of particular interest were strike marks on the forward structure, reactor room, and starboard wing, as these were continuous, with clear start and stop marks, making them suitable candidates for analysis.

Continuous nature of laser marks indicated use of a beam rather than pulse weapon. 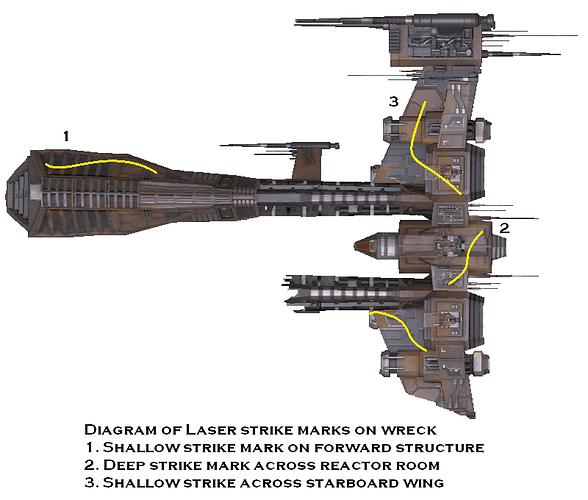 Numerous small impacts of metal fragments were identified.
Embedded fragments were retrieved and identified as fragments of hull plating, consistent with being from the same ship.
Trajectory analysis of the impact marks suggest the point of origin was somewhere within the port forward superstructure. 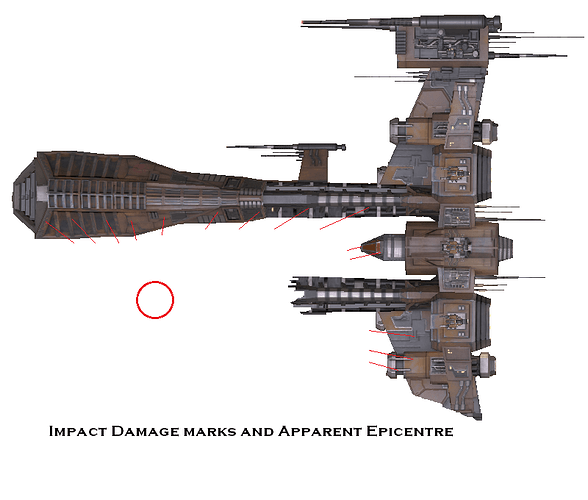 The interior of the wreck was in good condition, no evidence of any onboard fire was found.
The ship’s computer system was found to be inoperable, with no data storage devices present. Sockets in the computer system for removable data storage were all empty, one socket was damaged with several bent connections, suggesting a violent removal of the storage unit.
Reactor mechanical controls were found set in the position of half-power, with the starboard-side coolant valves closed. The reactor emergency shutdown system controls were found to have been operated, with the control rods fully inserted into the reactor.

Starboard-side reactor coolant pipes were found to have been punctured below the laser strike marks in the hull. Traces of coolant were found in interior compartments.

Majority of fuel rods were of the plutonium in natural uranium type, rather than enriched uranium or plutonium fuel rods.
Plutonium isotope concentration suggested minimum age of fuel rods of 90 years.
Caesium-137 and Strontium-90 concentrations suggest at least 75 years of decay since last fission events.

Recovered human corpse from the starboard forward gunner’s compartment, was identified as a woman of between 30 and 45 years old, with light red hair, styled with shaved sides of head up to parietal ridge, and long hair on top and crown.
She was wearing a standard ship suit, underneath a pressure-suit with anti-fragment armour padding. Helmet was not in place, but stored on back of gunner’s chair.
Personal effects were a Sebiestor Tribe symbol pendant, brass, on a brass chain around her neck, and a steel knife, of the Kri’tak type, worn in a scabbard on a belt around her waist.
Dessication meant her tattoos were not clearly readable.
She had some skin discolouration consistent with vacuum injury, and several puncture wounds caused by jagged metal fragments.
Additional fragments and punctures were found in her pressure suit.

Age and composition of fuel rods, and hull configuration and armament suggest the vessel was constructed some time between YC30 and YC50, with time of destruction being prior to YC50.

Laser marks on the wreck were consistent with having been caused by a quad light beam laser, of the type fitted to Imperial Navy patrol cruisers of the first century YC, rather than dual light beam lasers as were fitted to Ammatar Navy system patrol craft of the same time.
Length and shape of laser marks consistent with the Rifter manoeuvring at high relative speed to the firing vessel(s).

Laser strikes on the reactor room were to sufficient depth to have ruptured the coolant pipes, and cut power conduits on the starboard side, causing a loss of overall power, and total loss of power to the forward starboard compartments.

Fragment damage to the ship in location and nature of embedded fragments, suggests the cause to have been explosion of the port-side forward superstructure.

Gunnery control positions suggest gunner was aware of the loss of power, and had switched compartment power to backup, and was continuing to operate her gun under local control, prior to her death by asphyxiation and/or shrapnel after the compartment was punctured.

The wreck was taken aboard a Bowhead class vessel, and transported to the Sebiestor Tribe Bureau at Eram VIII Moon 13.
The human remains were also taken to the same location, in the hopes that Sebiestor Tribe officials can trace any living relatives of the deceased.

Thank you for your insightful paper. I wonder if there is a way to induce from the laser ablation pattern not only the energy imparted, but also the type of crystal used, and in particular the frequency? The particular frequencies used have changed over time. For example, knowing that T2 crystals were used can help put a lower boundary on the possible time period.

Hello there, now that the writing contest has reached a result, I am free to offer my opinion and answer your questions without any risk of it influencing the judges.

To answer your question, it is indeed possible to observe a difference between different laser crystals, on reference samples under laboratory conditions. Observing differences in patterns on recovered artifacts is considerably more difficult, and becomes much more a question of probabilities rather than certainty as to the weaponry involved.
Calculating the energy per shot with different crystals is straightforward enough in the lab. In the field it becomes a lot more difficult.

This problem becomes much greater with the involvement of more recent ship classes as the number of possible combinations of ship and weapon and crystal with a given energy per shot is much greater.

I hope this provides the explanation you were seeking ?