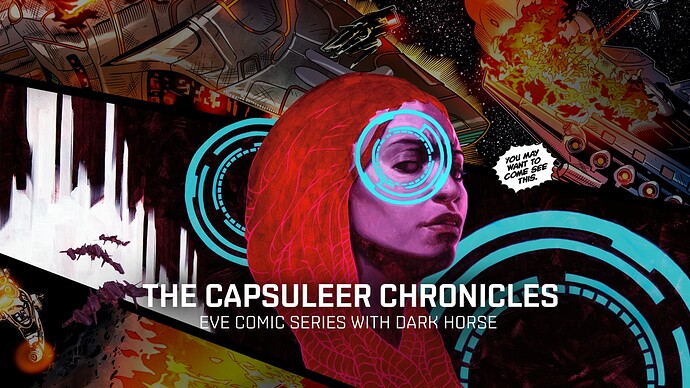 With the announcement of the new EVE comic series we have here a place for everyone to discuss everything related to Velocity, Dark Horse and the series itself.

As was mentioned in the news item, the first chapter in the four-part series, “Velocity”, can be previewed on the comic’s official landing page, with the full 20-page chapter available to read online through a selection of partners for free! The rest of the series is slated to be released throughout the upcoming year.

The preview for it can be found here: Capsuleer-Chronicles

Experience the chaos of Raravoss once more!

how did you mess up trig weapons in the first comic, they dont fire pulses

My, and many other lore heavy people’s, current assumption is that the comic is, while canon, meant to be sort of baseline(non-capsuleer) media consumption thing in universe, so also not strictly accurate to how things actually work @Drake_Iddon .

My first impressions @CCP_Paragon is that while its off to a rocky start, it has a fair bit of potential, and I’ll give it a fair shake and wait to see where it goes.

You know, people who use ‘woke’ like that tend to be terrible people. People who have a problem with the things that you list.

Does that apply to you?

Nice! Will this be available as a printed comic or just online?

Is it just me or does the order of the pages seem wrong?

One pane she crashes into another ship, another she’s tailed by triglavians, the next she’s out of her pod, the pane after that she’s being shot at by the triglavians… I cannot figure out whether I should read from left to right, from right to left or whether there are implicit time jumps in between.

I had to search my phone, to use the g auth to login here to ask you this.

What kind of problems do you have?

Did you already asked for professional help?

Why did it touched you?

I’m thinking you’re reading the landing page preview by this description. You need to click on the buttons to read the comic, the pdf button opens the comic straight up, others take you to retailer sites where you can get it for free (if you have an account there).

I certainly had my issues with the comic, but more on the way how it portrays being a capsuleer. Some of you guys really get that threatened by a female lead character who gasp might be gay or bi? Grow up ffs.

I love that you’re doing this, and would love to see more. (I even plan on getting into the novels sometime in near future too!)

But in this day and age, I can’t but wish this was available in webtoon format, easily accessible on various screen sizes and orientations. Physical comic books are great, but for someone who cut out physical media completely from his life, I wish for something better than having to pan and zoom with two fingers on a PDF file.

I’m thinking you’re reading the landing page preview by this description. You need to click on the buttons to read the comic, the pdf button opens the comic straight up, others take you to retailer sites where you can get it for free (if you have an account there).

I didn’t realise those 8 pages were a randomised preview for 20 pages. The order of the pages seems a lot more logical now!

Still, I don’t really follow. Some consistency between timelines is missing.

She seems to be switching between memories in the past with her dad when he was alive (where she has curly hair, is flying an Incursus hull ramming it into Brutix hulls) and the current timeline (where she has dreads and is flying a Celestis hull and is being chased by Triglavians). This isn’t consistent though.

One memory timeline crossing the current timeline is fine. Another memory timeline (if I interpreted the switch at page 9 correctly) makes for a confusing story. But then I simply cannot explain how page 15 is supposed to happen.

Is there something else I’m missing or is the story just missing some consistency?

Edit: Figured it out, page 15 is most likely incorrectly showing an Incursus rather than Celestis, which breaks the story. If it were a Celestis instead, she would swap back from her page 9-14 older trig fight memory back to her page 8 timeline and continue this timeline in 16 and 20-22, which makes sense story-wise.

Ugh, this time swapping is confusing enough even without mistakes.

i laughed so hard at this i almost threw up

–edit–
on a serious note, i’m actually curious to see where this goes

Is there something else I’m missing or is the story just missing some consistency?

It is a bit disjointed yes, I had a bit of trouble following as well. There appears to be not two but three timelines (past, recent past and present) going on in the story, and the only real clue to this switching is the ship changes and hairstyle changes. I think you’re following the story correctly, but they really switch around too much with the timelines.
Hopefully the next chapters will be more easy to follow.

There appears to be not two but three timelines going on in the story, and the only real clue to this switching is the ship changes and hairstyle changes

Yep, after making a helping note for myself with the page numbers, story, ships and hairstyles it seems indeed that there must be at least three timelines.

But if it is so very important to see the difference between timelines based on ship hull and hairstyle, what is page 15 supposed to be?!

they really switch around too much with the timelines.

It’s actually so bad that I wonder if the pages are completely out of order on the PDF.

Could be. But even that can’t explain why she’s flying an Incursus chased by three trigs one moment with curls and swapping the curls for dreadlocks during the hull alarm.

Yeah I was thinking maybe there’s her memories interlaced with the current situation but then the ship changes abruptly like you say.

I think you’re right, page 15 could very well be the moment her memories of her earlier trig chase interlace with her current trig chase.

And instead of making the same mistake as in the past (and in the past past in the simulation with her father), which was to engage solo under influence of drugs, she now decides to do the right thing at page 16 - and calls for aid at page 20, which shows up at page 21.

The big problem is that page 15 incorrectly shows an Incursus, rather than a Celestis.

And that breaks the consistency of the story. Seems like the artist may have to redraw that panel.

On page 10 she reports the first 3 kikimora to a short haired CONCORD lady, on page 20 she seems to return in the long haired version. She calls them CONCORD in the past, EDENCOM in the present EXCEPT on page 20?