Your solution is a way too difficult. You just need a permission, similar to what I saw over somebody’s Bio once. 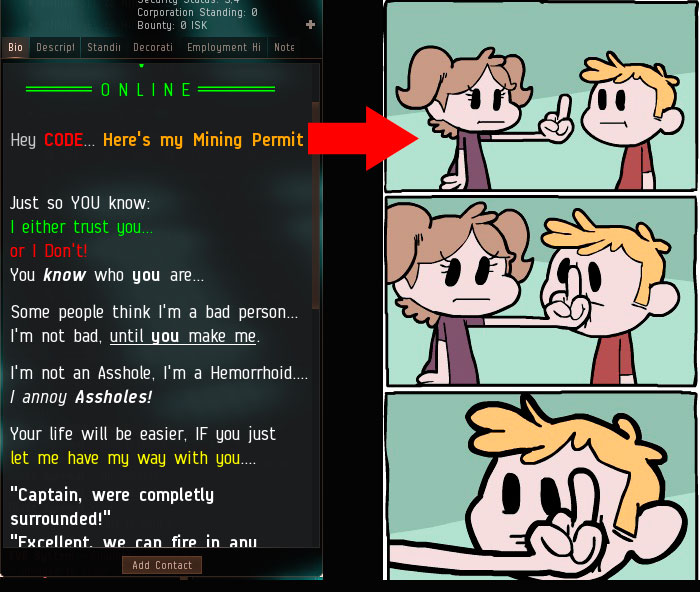 Just notice the specific sense of humor of that buddy. To see the animation of that permission just check player avatars across the Sinq Laison.

But, OP, Holy Cow! There are still Procurer’s suicide gankers?! If so, @Ima_Wreckyou, I’ll bring one of my Procurer to sacrifice in the name of CODE ganking one day. Do you still hang out at Teonusude or Abudban system currently?

Yellows plan is to obvious and can easily be spotted by the scout, so the ganker will bring counter measures like a bumper to separate the ships before the gank.

this is no problem with close bounce points. tried that.

Yeah, but the idea of the OP is not to escape but to bait. Your suggestion will therefor not work if the ganker spots the trap.

And I highly doubt OP tried her own thing but her idea is that “someone else” will.

Sure, come by and cry some in local

That is so cute, you try emulate Galaxy because you want to be cool like him.

That is so cute, you try emulate Galaxy because you want to be cool like him.

Is what you said…

Sup. Look for the ship name “Wreck this washtub!”.

the pic is great 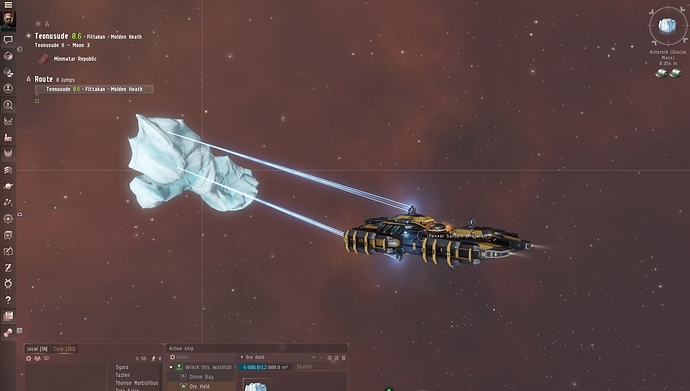 Haha, I always enjoy if someone wants to play some EVE with me. Unfortunatly I’m not sure if I have time to play this week, but hang in there, I’m sure we will bump in to eachother eventually (pun intended).

This picture is great

Sorry I’m late to the thread, guys! I was busy consulting the CODE./goon CSM rep about how we can further screw over the very small band of highsec a-typicals known as anti-ganking.

No smaller than your actual active CODE force. Also I’m not an anti-ganker, I’m a baiter. You can gank whatever the hell you want, makes you very predictable please continue while you wipe on troll t1 insured abaddons.

Oh, hi there! My previous post wasn’t directed at you, so I’m not sure why you’re being hostile.

One question: Why abaddons?

Guess I didn’t get what’s the trolling and baiting initially, but there is something that is better fit for OP’s idea: the Veldnaught.

Can fit sebo and cap boosters and a buffer armor tank with mass large reps and cloak all at same time. Very cost efficient after insurance.

You may be able to achieve something similar if you rig a maller with three ancillary current routers and mass reactor units. I’d have to open PYFA to check it out, it would be far cheaper but also far easier to jam and destroy in the process (if possible to fit with large reps).

The Abaddon will force them to try to break the reps on the covetor. They cannot hope to both down Abaddon (first) and then the Covetor before CONCORD shows up. The only way this would be possible would be to bring 4x as many ships as it would normally take to gank the covetor. It would take roughly 3x as many ships to just kill the covetor.

Ah! Of course! That answers everything. Quite a masterfully thought out piece of theory-crafting. Bravo!

Another question: Have you considered actually trying this out?