The Current State of Ore Sites in W-Space

The current despawning mechanics of anomalies/signatures, coupled with the low profit of mining and the cumbersomeness of mining operations, lead to ore anomalies piling up in empty systems, reducing the opportunities for mining in w-space.

The current mechanics for ore sites in w-space are as follows: The sites will remain indefinitely in a system unless someone has warped to the system. Then, around 20 minutes later, sleeper NPCs will spawn (the quantity depending on the type of site). After 3-4 days, during the downtime period, the site will despawn. If no one warps to the site, the site doesn’t despawn.

Mining itself is cumbersome due to the volume of the ore. From the three mining barges, only the Retriever can hold a decent amount of ore (around 25k m3), while the other two can hold a lot less. That means that they have to either jettison it and pick it up with another ship or do trips back and forth. This process can be supported with the help of industrial ships or bigger ships (like an Orca). Overall, the process, if done in the system where one lives, is bearable. When doing it in a foreign system, it’s not.

One of the defining mechanics of w-space is the mass limit of wormholes. Many wormholes have a max mass of 2,000,000,000kg. Some, like statics going to k-space may 50% more than that, while others, going from w-space to C1 in example, may have half of that.

The current prices of ores are not great. Only one has a decent price, with the next in the list having half its value. That means we are talking about between 6.5m and 12m per hour of mining with decent skills on a Retriever. One particular ore is double than that.

Unconfirmed factor: The spawning/despawning mechanics are tied to the w-space class. In example, an ore site that is despawned from a C2 can only spawn in another C2. This is something that I have observed, but I don’t have full confirmation. This leads to further stagnation as some WH classes are a lot less popular than others, leading to further anomaly accumulation.

When combining all factors, then we see the problem. Mining is not highly profitable, but it’s still worth doing it, especially for a few ores, which can then be compressed at base to be hauled to k-space. However, mining in a foreign system is very risky for various reasons.

First, mining takes a considerable amount of time compared to running combat sites, which increases the chance that one will be discovered.

Second, because there are not many ore sites, it basically takes two warps to get to the mining ships. One to get to the site, another to warp to the ore, as it can be bookmarked.

Third, because of the low profitability, one has to mine several hours to overcome the cost of potentially losing the mining ship(s).

Fourth, because of the volume of the ore, there has to be some sort of hauling system in place, which is going to be either very vulnerable ships or very juicy targets.

On top of this, mining barges are going to be equipped with higgs anchor rigs, which indirectly increase their survivability. That means that their mass is going to be around 40m kg. For wormholes on the lower end of mass, that means few trips before the mass of the WH reaches its maximum, amplifying the need to have some system to haul the ore.

Conclusion of the Combined Factors

Mining in a foreign system is almost never done. It’s too risky, too cumbersome and not profitable enough considering the effort and risk. This means that the sites don’t even get triggered, so they don’t despawn. That leads to sometimes having to wait up to four weeks to see a single ore site in the home system. Combat anomalies are constantly done in foreign systems because, while the risk is still there, they don’t take much time, there’s no effort with the hauling (except having to drop an MTU) and they are highly profitable. The sites are done, they despawn when done and respawn somewhere else. It keeps the cycle going. Ore sites don’t go through this.

Implement a hard respawn timer on ore sites in w-space. They spawn during maintenance on day 1 and despawn during the maintenance of day X (4th day is good in my opinion). This will lead to more opportunities for mining and a better flow of content, as otherwise it is stagnant as the sites just pile up eternally in systems where no one will mine.

I’m going to find one of those empty systems full of ore and sell the entrance.

The nullbears have reached wormhole space.

I don’t have problem with anoms eventually despawning if left untouched for so long. But it’s worth remembering that WH’s weren’t designed to be hospitable. And they certainly weren’t designed so you can sit in one system and wait for resources to periodically cycle to you.

The nullbears have reached wormhole space.

I have never lived in NS and being a carebear is not part of my experience. I’ve exclusively only lived in w-space.

I don’t have problem with anoms eventually despawning if left untouched for so long. But it’s worth remembering that WH’s weren’t designed to be hospitable. And they certainly weren’t designed so you can sit in one system and wait for resources to periodically cycle to you.

The risk / effort vs reward of mining compared to any other activity in w-space is really bad because of what I outlined above. Let’s keep in mind that, even if sites were to despawn on a hard timer instead of when triggered, we would still have:

I’m not asking to wait for the resources to regularly spawn in my system, but they should spawn more often than they do and/or it should be more enticing to mine in foreign systems. The only time you see someone mining in a foreign system is because they are either baiting on a Procurer or they are a bit lost.

Offered a gameplay design suggestion for a new type of ore anomaly for j-space and Pochven that may address some of your ore value requests.

Propose adapting a new type of shrinking zone battle royale ore anomaly to j-space and Pochven wormholes that contain a randomized mix of rare versions of all ores, gas and ice. Abyssal Deadspace Shift: The defining special characteristic of this site is at either random (Chaos Site) or set (Order Site) intervals the shrinking center sphere of the anomaly (starts 500km radius bubble on first jump and decreases to 5km radius on last interval jump), all entities move together into a new j-space …

Risk to reward is quite high, yet these ore anomalies don’t get bunched up in a single system because of a built in despawning mechanic on a time-table of ‘hours’

This means that the sites don’t even get triggered,

Yeah, that 100% false. Any WH group worth thier hole will trigger the ore sites in connections.

I like the idea of that kind of dynamic gameplay, but I’m not sure if it’d work for mining.

Yeah, that 100% false. Any WH group worth thier hole will trigger the ore sites in connections.

So do we, for the reasons stated in this same thread. Yet I constantly stumble into systems with accumulated ore sites and, more rarely, combat sites. 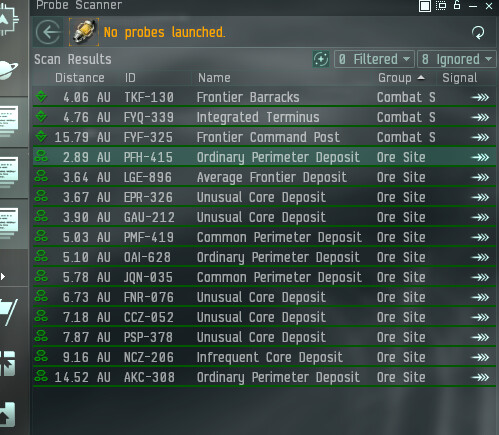 Look at that picture. It’s a C4, but I can’t remember the static make-up.

A bit of additional info:
AFAIK
Wormhole sites spawn is limited by constellation not entire class. Constellations are relatively small.

About ore:
I’d like to see new types of ore that would be profitable to ninja-mine. Something with mineral concentration at level of current compressed ore.
That type should spawn only in hard to reach places (like wormholes) and take less than 10% of current market.

That will provide new niche for mining characters.

I’ve also considered this option, but I haven’t been able to find confirmation. It’d also be very hard to determine. It’d mimic the behaviour of sites in k-space though, so it makes sense that it would be this way.

I’d like to see new types of ore that would be profitable to ninja-mine. Something with mineral concentration at level of current compressed ore. That type should spawn only in hard to reach places (like wormholes) and take less than 10% of current market.

LS ore sites have something like this (like “triclinic Bistot”), so having w-space-only sites with even more concentrated ores would be a good addition. Good idea.