I wanted to share a few Rookie pilots experience with the UI.

This rookie, me, I’ve played EVE a bit in the past and returning to the game again. Let me show my layout. example_layout.png - Google Drive

You can see I’m doing the 5 starting Career Agent missions, so I’m in one of the starter systems. Note how I have Local. I don’t see Local as a useful way to communicate and hide the ability todo so (unless I can type in that rectangle bottom of the window, untested). To me Local is just for spamming wts in Jita or trolling. But Just found out from a steam forum chat about hiding the chat window, that PvE does comms in Local. If that’s true, I listed my take bottom of this post and hope the new UI accommodates:

Get rid of chat window on start up. :: EVE Online General Discussions

Silly problem... Every time I log in and the game starts I get that annoying chat window shoved in my face. I can't find the option to turn that off. Hope I'm overlooking it... Anybody knows how to?

i know its ugly

my suggestion is to set it so it just show names …

For sure. I used WH space for a while. Check out example_layout.png - Google Drive

I’m curious about what Shotgun said there, is it true what he said about NPCs?

The local chat window isn’t just for chat. It’s an intelligence tool that lets you see what players are with you in system, and it’s also a way for certain NPCs (not just players) to communicate with you. Disabling it would lead to severe deficiencies in gameplay, which is why it’s one of those UI elements that can’t be removed permanently.

Two very green pilots wanted to completely hide the chat window and was curious why this would show up when logging in. I advised it does that for the first 30 days

No actual real newbie would want rookie chat to go away. There’s simply no reason for it and since they don’t have a bunch of chat tabs yet it doesn’t affect them.

The only ones wanting it gone are people who are used to playing and they can’t handle something new (so they’re not new players) or ones who have so many chat tabs it gets difficult to figure out which is which (so not new players 99% of the time).

And yes, local is very important for various reasons.

is it true what he said about NPCs?

Another sometimes-useful thing that shows in local is your list of system changes. I’ve had to backtrack my path a couple times for various reasons, and the “System changed to: X” type notices there were a handy quick reference.

> Message > This is a distress call to anyone listening in the vicinity! We are a Guristas research and trading facility that’s under heavy attack! Please come to our aid before lives are lost! 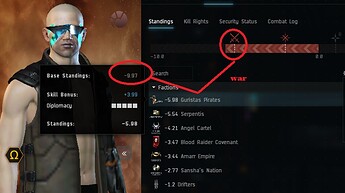 There’s a very interesting thread in Reddit about how to improve chat. The number one upvoted comment is to unpin the list of players in local and have it a separate window which is frickin brilliant: https://www.reddit.com/r/Eve/comments/zo7drp/what_would_you_like_to_see_added_in_an_update_of/

The second highest comment I believe is to eliminate local spam. Both suggestions would fix my issue in the OP, unsure about other pilots issues with having is visible.

If we could customise the new UI to just display what we want our way things would be so much smoother with the transition and accepting change.