Not if it means shrinking the size of New Eden, idk I might be reading that comment wrong about the;

I think you replied to the wrong person here.

Adding to their comment as they first replied to you.

Yes by space trimming I meant reducing the number of sectors of each type of space. With less players that will become more and more needed. Imo it is needed already… 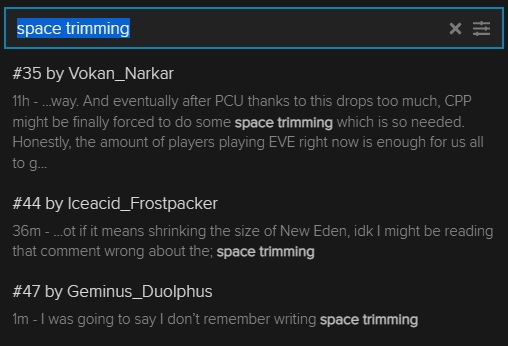 Yes by space trimming I meant reducing the number of sectors of each type of space. With less players that will become more and more needed. Imo it is needed already…

Multi boxers aren’t really the fat. More like the gristle and offal.

I see these oft-repeated opinions “AFKs are ruining the game”, “multi-boxers are the problem”, “career carebears need to go”, “get rid of Alphas”, “structure spam must go”, etc., all of which basically say:

“I don’t want other people playing the game if they’re not doing the things I want them to do.”

It’s curious, in a game with a significantly declining player base, that we have all these folks that just want to see other players or their playstyles taken out of the game.

I wonder what exactly it is about all these other game choices that makes them so intolerable? Are we really that desperate to see only 6,000 people logged in, just so long as they’re “playing EVE the way you think they should”?

So basically we are saying that multiboxers are good for the health of Eve Online?

Multi boxers aren’t really the fat. More like the gristle and offal.

Offal = (Multiboxers) whom are loaded with;
**Minerals (Maintain CSM Voting Power)
**Vitamins (Resourceful like being able to overcome difficulties)
and
**Amino acids (Skill Points)
and the list of creating new healthy pilots continues…

Funny thing about professionals, they tend to not have or make much time for computer games.

Assuming there were enough professional basketball players in the world, i’m sure CCP would consider it.

As stated I empathize with anyone who ends up paying the equivalent of like a day or more of RL work for a sub due to exchange rates but if you’re like the vast majority of North American, EU, UK, or AU players, a sub most likely costs no more than an hour or two of RL work.

Eve is and always has been a commitment. A community. If you don’t have $20 of disposable income every month to put into something you likely spend a significant amount of time doing, then I truly sympathize with your situation but refer to my previous comment about literally every activity having a minimum cost of entry and $20 isn’t unreasonable in today’s market. If you’re actively playing the game, doing industry, PI, research, 720 hrs of skill training and game activity for $20 is probably one of the most cost-efficient subscriptions on your list of bills. I mean, we’re mostly adults here right?

I think a big part of the problem is that anyone who’s ever had an eve account and haven’t actually played in years can get on the eve online forums and complain when they don’t even have a stake in the game. No wonder CCP ignores the official forums. Limit posting ability to people paying for their accounts - you know, the loyal players - and there would be sooo much less salt.

I know i’ve stated some unpopular facts but trolling is part of the problem and your random statements are kind of unproductive.

I see these oft-repeated opinions “AFKs are ruining the game”, “multi-boxers are the problem”, “career carebears need to go”, “get rid of Alphas”, “structure spam must go”, etc., all of which basically say:

It stinks of totalitarianism.

Are we really that desperate to see only 6,000 people logged in, just so long as they’re “playing EVE the way you think they should”?

I know i’ve stated some unpopular facts but trolling is part of the problem and your random statements are kind of unproductive.

Dude you seriously haven’t stated any unpopular ‘facts’, and the facts you try to state you get wrong (like “literally every activity having a minimum cost of entry”).

Basically your crying because other people are quitting EVE and walking away. You want people staying and paying so your play experience stays worthwhile. And somehow you think insulting, poor-shaming, and regret-guilting (“unsubbing only hurts you”) is going to make people stay?

You’re as blind and foolish as CCP is - “players are dumb for not acting the way we want them to, how dare they not send money!”.

Then you top it off with all the old chestnuts: “don’t agree with me? You’re a troll!”, “I don’t like these opinions so they shouldn’t be allowed to post”, “if you don’t want to pay then you weren’t good at EVE anyway”.

Guess what? The game is a leisure activity, not a necessity, and people walk away when it’s no longer worth it. An extremely small percentage of them grumble about it because they expected better of CCP, but 98% of them just vanish.

Yeah, EVE can be social - and so is just about everything else they do with their leisure dollars. EVE isn’t the only friend connection for (most) people.

Yes, it’s unfortunate that your 10-year investment in EVE is circling the drain because CCP can’t be bothered to maintain product quality. But at some point people need to evaluate whether it’s worth throwing good money after bad. You haven’t hit that point yet - obviously other people have.

this is how it’ll look

TBH those cosmetics would sell, even the fatsuits. Might help CCP with their funding problems.

Nothing in OP or in-game justifies EVE Online being the most expensive MMO on the market.

TBH those cosmetics would sell, even the fatsuits. Might help CCP with their funding problems

I don’t doubt it.
I just meant that everyone would end up doing the same things. lol

A word of advice. If you actually want to influence people. Don’t insult them. They are likely just going to give you two middle fingers.

And the players are okay with missing/invisible representatives? I would’ve thought members of the CSM to at least be interested in what the players want and think and be a bridge of communication between the players and CCP.

Bearly got half way through OP’s thing I agree that they shot themselves in the foot waiting 20 years to increase sub’s but they could have at least been smart about it and released it along side a major content release and not in the dark.

True, they will just find someone else to do it while they do nothing.

That said, thats what I did and Im not a wealthy business person in real ife

Because unlike here, in real life Im not a total dickhead

Remember that our brain act’s as a filter between the soul and our action’s. In games responsibility is diminished and hence our brains apply less filter’s, if you had to die and be in spirit form what shape would your thought’s and action’s bare?

Sometime’s game’s can help us restructure our primal thought’s so they don’t need filters.

If you were a cat person you would know that the top picture is tasting the air.

Then the 2nd picture appears to show you a yawn.

For some reason I just pictured a whole line of animal clothing, black tie suits for dogs and cats aswell as wetsuits for dolphins.