Gutter Press, reporting from the ground on Vale V.

Triglavian forces have engaged the Vale People’s Liberation Army and effectively destroyed them as a fighting force. 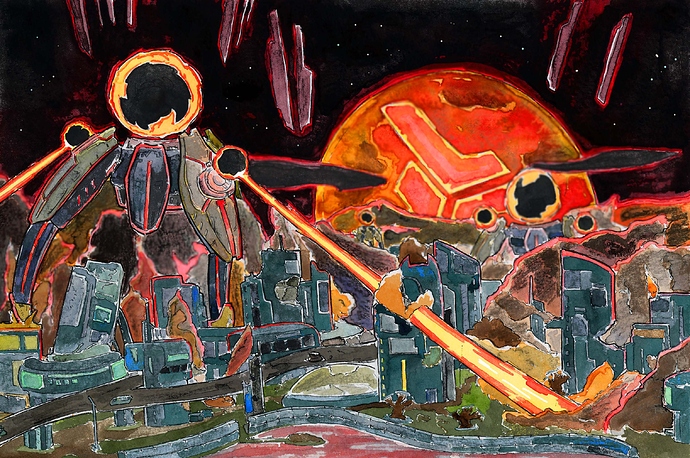 This reporter had travelled by ground vehicle from Port Azure to a nearby area of VPLA presence, where they had formed a cordon around a Triglavian landing zone, the Triglavians forces having established their own perimeter, and being engaged in some kind of activity within.

I was forced to stop my vehicle some 50km or more from the reported VPLA position, as a scene of complete and utter devastation blocked all travel. Enormous gouges in the ground, forests and vegetation scorched and blackened, thick black smoke hanging in the air. In the distance, burning shells of VPLA armoured vehicles could be seen.

I drew my own personal weapon at a nearby noise, before I saw it was a young militiaman, weary, streaked with blood and dirt. I gave him some water and asked what had happened.
“The Triglavians. They wiped us out”, he said. “Hundreds dead, maybe thousands. They were controlling giant machines that walked across the ground.”
Asked about the nature of the machines, the militiaman called them “Fighting Machines”, and described them as a tripod construct.
I mentioned having observed what looked like a large, triangular, dropship overnight, and the militiaman said he saw it as well, and that it looked like it was headed for Port Azure.
I said I had to go there at once, and he said he would as well, to “report to headquarters, if there’s anything left of it.”

As we travelled, the militiaman described the Fighting Machines, enormous tripods taller than most buildings, and armed with a directed-energy weapon emanating from a dark sphere hovering above the main body of the machine. It was unclear if they were automated or crewed machines.

Midway to Port Azure, we came across a pleasure hub, but it was deserted. The militiaman asked if everyone was dead, then we spotted a battery of plasma artillery, with gunners standing by. “Sticks and stones against a thunderstorm”, was the militiaman’s comment on the effectiveness of such conventional weaponry.

We had travelled a further 25km when suddenly, there was a heavy explosion. The ground shook, and my vehicle ran off the road into some vegetation. As I struggled to extricate it, the silhouette of a Fighting Machine appeared out of the smoke haze, another came, and another. With a deafening roar like thunder, the Triglavian Fighting Machines opened fire on the deserted pleasure hub, turning it instantly to flaming debris. The plasma artillery we had spotted opened fire, though it seemed mostly ineffective, and was quickly silenced by the Triglavian directed-energy weapon.

Having extricated my vehicle, we made for Port Azure at full speed, reaching it just before sunrise. By this time, the population was alerted, and a panicked evacuation was under way, with people attempting to flee the city by aircraft, by sea, and even on foot. The militiaman departed in an attempt to find any functioning VPLA chain of command, and I was left alone for a while.

I made my way to the harbour at Port Azure, where ships were taking on refugees, departing for the other regions of Vale V, where Triglavian presence is lighter or non-existent. Port Azure police were struggling to maintain order and prevent the crowd from stampeding and rushing the already packed ships, when suddenly the crowd fell silent. On the misty horizon appeared a Fighting Machine, followed by two more, one striding along the shore towards the harbour breakwater, to block the exit of the ships.

As they approached, they fired on the port facilities and other buildings. Burning debris rained down upon the civilians, who panicked and ran. My vehicle was overturned in the stampede, trapping me in line of sight of the Triglavians, which gave me a good viewpoint of what happened next.

Sprinting along the breakwater, at a pace that seemed scarcely human, was the Jin-Mei Dimac legend Whackmaster Zhao ! Parkouring off the port machinery on the breakwater, he launched himself through the air at the closest Fighting Machine, and split its leg in two with an almighty blow. The Fighting Machine crashed to the ground in flames !

People witnessed this event, and cheered, daring to hope that deliverance was at hand. Unfortunately it was not to be. As Master Zhao approached the second Triglavian machine, three more appeared out of the mist, raised their weaponry, and seemingly vaporized Master Zhao.

With no opposition left, the five remaining Triglavian machines could easily have eradicated the city, yet they were seemingly content to retrieve the debris of their fallen comrade, and depart back into the mist, leaving the harbour unmolested, and allowing the evacuation to resume.

Extracting myself from the wreck of my vehicle, I looked upwards at the still dark sky. It was lit by exhaust trails, dropships following dropships, and no-one and nothing was left now to fight them.

Port Azure belonged to the Triglavians.

As Master Zhao approached the second Triglavian machine, three more appeared out of the mist, raised their weaponry, and seemingly vaporized Master Zhao.

It was a pleasure to know you.

I was under the impression that Jin Mei masters could disappear themselves into a cloud of smoke.