I’m having a hard time figuring out why I wouldnt want 3.6 Machs over a Vargur.

Vargur - 100% damage mostly negeted by only 4 turrets. Its has a tractor beam bonus and more cargo space. slightly higher cap. Can use MJD a little sooner. Oh… and it can activate a stuck in place module in case something Ewars you.

Can someone tell me what I’m missing in the ship stats to justify 3.6x cost and weeks of training? I want to want it but just cant find a reason to.

Can you take on 15 players at once while solo in nullsec? A single Mach sure as hell can’t, but a marauder like a Vargur or Golem can…

I don’t think you’ve even looked at the stats on the Vargur. The role bonuses alone make it more than equal to the number of guns you can put on a Mach, plus the bastion module gives it a 1000% bonus to sensor strength, 25% to range, and a ton of other benefits…

Somebody like @Anderson_Geten could probably write out a detailed explanation, but I will just say that the marauders, in general, have amazing ranges and almost impenetrable active tanks. They are somewhat like a mini-dreadnaught. The Machariel is more agile, but once it is pinned down is easy enough to kill.

Marauders can hit from so far away that you cannot engage them, although the Vargur is not so good at this as the other Marauders. If you do tackle them then they are very hard to kill. Oh, and they get a bonus to micro jump drives that can get you out of bad situations.

Also, the vargur would be more economical with arties for pve since each bullet hits harder than each bullet on a mach. Also, what quake god said.

I actually did look at the stats of the ship. But they don’t list the things you mentioned. I just looked up the module and I see the stats listed there.

Can use MJD a little sooner.

Can someone tell me what I’m missing in the ship stats to justify 3.6x cost and weeks of training? I want to want it but just cant find a reason to.

Look at this graphic. A marauder class ship is not an improvement but a special snowflake.
The machariel is a pirate faction ship and the top tier, well at least used to.

Back in 2013 CCP had a huge ship rebalance for all ships in EVE and this is how it was supposed to look like and for a while it did.

However the new graphic would look more like this:

Bah. I didn’t even have the chance to hop on this thread before he saw the light!

The Vargur is a beast, and flying both, it’s superior to the Mach at most things except pure blitzing and cost. (Mach wins on pure fun, though, which is something worth seriously considering.)

The mach is king of smartbombing gatecamps.

loot fairy clubbed out a hard denial on that one.

Somebody like @Anderson_Geten could probably write out a detailed explanation, but I will just say that the marauders, in general, have amazing ranges and almost impenetrable active tanks. They are somewhat like a mini-dreadnaught. The Machariel is more agile, but once it is pinned down is easy enough to kill.

I think you are mixing PVP and PVE.

IMO marauders are not to be used with bastion. I mean, they can be fit with bastion, but it’s best to have them fit for non-bastion gameplay.

Now, comparing non-bastioned vargur and mach :
Let’s compare a vargur with AC, gist XTXLSB, MJD, core x500mn, and a mach with the same (vargur has bastion but offline) 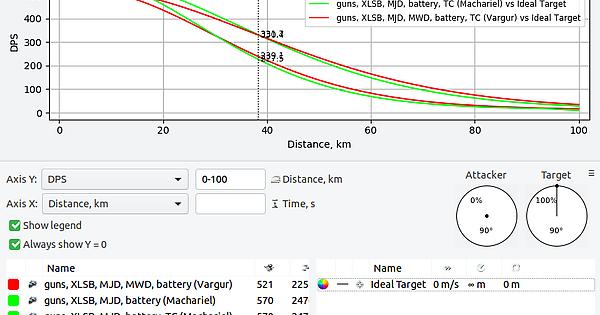 I added with a TC to compare the effect.

Basically : same DPS, mach is better close, and around 30km the are the same, then vargur is slightly better. Mach wins for this one. With a TC, only the range changes: from 30 to 40km.
This does not consider tracking though, which is bonused for the vargur. So in many cases it will hit actually more .

However you can compare the base of the two :

So all in all : vargur is better when it comes to tank. Also ammo usage, and salvage/tractor but that is useless. Mach is better otherwise, better close range DPS, better mobility, better cost.

So yes IMO vargur is not that good. But its not THAT bad either, because its tracking bonus helps it move and shoot, its tank allows it to be much more aggressive, and the DPS bonus of the mach is neglected when it needs to use cap rigs, and invul mid, while the vargur can use DPS rig + TC mid, and still have better EHP/s. Worth the difference in price ? Dunno. Up to you.

Those ships are made for different roles and some of the advantages that OP mentions don’t work so well in practice. I mean, so what if Machariel has more powergrid? It needs it because it has 3 more turret slots and it still has more trouble fitting a full rack of 1400mm’s than a Vargur. More base HP also mostly doesn’t matter since Vargur has better resists profile, giving it better active tank even out of bastion. Sensor strength? Irrelevant for Vargur when it’s in bastion. Machariel excels at Lvl4 mission blitzing, but will struggle at tough Lvl4 Epic Arc missions like “Showtime” where Marauder’s tank won’t fail, or on missions with strong EWAR that bastion module can neutralize, such as Serpentis or Sansha versions of “Blockade”. And Machariel can’t solo C4/C5 sites. I would say that Marauders are well worth their money, once you are able to afford them.

Want to throw a brick that’s armed to the teeth into a combat zone? Get a Vargur

Feel the need to #gofast? Get a Mach

Basically… They are both completely different ships used for different roles and you can’t grab 5 stats off of both ships and say “X is better because of guns”. There are more factors in play for these 2 ships, even before factoring in playstyles and preferences. I personally liked my Marauders back in my mission days for some missions (or how I felt at the time) because you can just park them in a deadspace, pull the handbrake (bastion) and blap away.

Though if I felt the need to #gofast, out came the machariel and burner ships and fast I went.