They’re not seeded, confirmed by CCP on the Known Issues thread
I expect a fix will come very soon

Just a quick collection of links to the market pages for the new items. No, the names aren’t on this page, because I’m lazy.

Yeah, sorry about that. CCP’s basically unofficially confirmed it’s aimed at me, so… seems kinda a bit much when they could’ve just hit me up on their internal slack to ask me to chill.

Is there a way to remove these new pointless notification things?

Give it time. They eventually added a toggle for the red dot, right?

While you’re adding all of these new monuments, I was wondering… 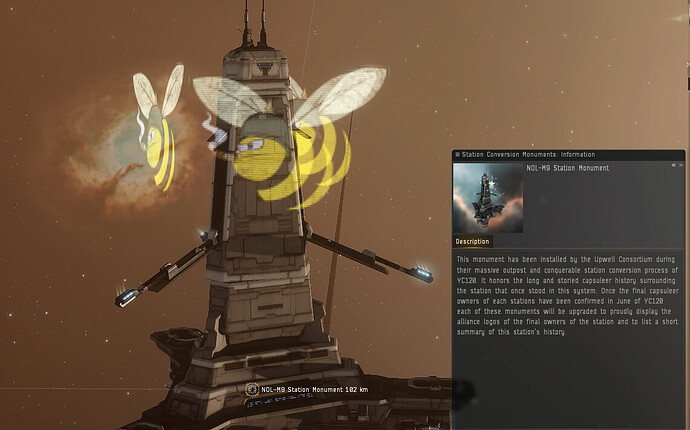 When will we actually get the ‘upgrade’ to ‘list a short summary of this station’s history’ on the monuments for the old conquerable stations? Just, you know, while all these new monuments to things players didn’t do are going in, might be nice to actually finish the monuments to over a decade of things we actually did that you promised us more than 5 years ago.

(NOL monument chosen purely because it’s the one I had a cloaky closest to.)

New SDE has now released. Thanks!

Guess I should get off my ass and convert it

Could we have math link to ESS/DBS change ?

Could we have the minimum amount of bounty ?
The % take by ESS when minimum bounty?

So where are these new BPO’s. I have checked Jita and Heimatar none are there?

See above from the Known Issues thread.

So how do we now get the military index up in null sec space?
Missing (empty) asteroid fields mean NPC spawns only on gate and frequently in the ore spawns.

It already was damn hard to rat up index with asteroid npcs if you have a system which only had a few belts.

Will we get something in exchange?

Fixed an issue where the New Location (i.e. bookmark) window does not remember its position when closing and opening again.

Thank you for this fix CCP!

Will we get something in exchange?

You can buy them from lp stores apparently

Does anyone know what this means?

I believe it means ‘survey’ as in customer service surveys.

How are you enjoying EVE, what do you think we should improve, etc.

Remind me all you like. There’s a reason I put it in quotes. That was the answer given by CCPs Rattati and Psych on a stream about the economy changes to people expressing skepticism about ‘the plan’.

Oh, what did you brake now?
My computer is almost unresponsive when I run Eve.

I can hardly type in another window than the game client, and all my hard drives seems busy.

Processor is running harder than ever and Eve client steals about 50% of the processor time.

@CCP_Dopamine by the way, we’re looking at 10x more PI stuff requirements for the new capital compoments, is this a bug?
e.g. Evepraisal - Appraisal zqwd6: 50.79 Billion Buy / 50.87 Billion Sell
the spreadsheet said that we would only need 400 synapse, but actually we need 4000 in game, is this a bug or intended feature??

edit: the neurolink cell preserver is correct, but the enhanced one is different from what is said in the spreadsheet
e.g. Evepraisal - Appraisal zqwd6: 50.79 Billion Buy / 50.87 Billion Sell
the spreadsheet said that we would only need 4000 synapse, but actually we also need 20k mini electronics, which is not stated in the spreadsheet
can we have a correct version of spreadsheet?

Yesterday I found 3 Mykoserocin pipe nebula. Today I did not find a single site all over highsec Heimatar.

Well CCP, you made trigs about as threatening as a damp noodle now, kind of a shame, going to kill off a lot of peoples interest, we actually had active fleets going out to protect systems by shooting them, now there isn’t any real danger

You created something amazing and then you neutered it like it were a puppy, so disappointing