@CCP_Dopamine Can we ever expect the issue of the text being completely blurry to be ever resolved? Are we ever going to be able to play in maximized windowed mode, which is how most players play the game when using more than one client?

It has been a week and nothing has been done nor communicated about it. How can a game company screw the display of their own client, not catch that in testing before release, then ignore this issue for a week, which prevent users from playing the game properly and gives the impression of being permanently drunk? This is seriously making me lose faith in CCP ability to QAQC their own game and fix issues when they are reported…

not catch that in testing before release

not everything that translates from sisi to tq will be perfect… it could look fine on sisi, and go to hell when it hits TQ

We are looking into the issue that caused the max locked targets of +2 to be removed and will update accordingly!

Thank you for the response CCP Swift.
Looking forward to have an update.

Thank you for the report,
We’re able to reproduce this consistently each time the ‘Check on Market’ button is clicked from the Skills Catalogue (no need to close/reopen the skills menu or character sheet each time). We’ve logged the issue and are investigating the cause.

Got a black screen in the client, infinite loading now. Been a week with this issue, so imposible to use eve. hope it heals soon lol, all im playing is mame 32 and watching Outlander.

Thanks for the response and happy you could reproduce!

eve_crashmon process? If i close the client black window, it seems to stay open in the launcher, cause i cant stop it clicking the icon. Also that crash process keeps running next to exefile. 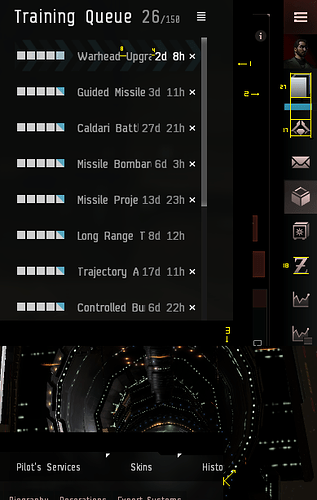 Thank you for your consideration CCP. I am grateful for these threads.

Wow, you don’t know much about Xeons then - they are actually VERY good for gaming, just way too expensive for most people to game on. As far as adhering to standards, Xeons ARE the standard, your i7, i5, etc, are just watered down versions for the masses to buy cheap. Same thing with NVidia’s Quadro vs their GTX cards, Quadro is great for gaming, just way more expensive, and you can usually get way more bang for your buck with a GTX because you can afford a much higher end one. That being said, since most of my gaming rigs have been used workstations with Xeons and Quadro cards, I can definitely say they work great. And I have found the solution to the issue, and it does appear to be some kind of glitch in some of CCP’s code. Going to post the solution I found in a separate post, so hopefully it can help others who have encountered the same issue, and maybe CCP will even put some kind of fix in place for it.

So, finally got the game working again today, going to post what I did in case in helps anyone else facing the same issue.

To recap, game was running great, and had just fully updated my system about a week before the patch. After the patch downloaded, launcher worked great, but as soon as I tried to press the play button, would get an message saying the game had been launched, but it would never start.

Checking the loglite messages showed the following error, which from some web searches many others have encountered since the patch:

I am going to be honest, and while I am an IT guy, I am not a huge coder, so looking at the code in question didn’t do much for me. However, some additional web searching, and I found a post talking about the same file throwing the error. https://www.reddit.com/r/Eve/comments/q79y05/is_this_the_patch_that_finally_removes_linux/

Not sure how this guy found this solution, and again, not a huge coder, nor have I really looked into the file enough to know why, but his solution of copying the launchdarkly_client.pyd file from the tq folder into it’s parent folder instantly solved the problem. Game launched immediately, and runs just like it did before the patch.

Hopefully this helps someone else experiencing this issue!

Is there a plan to get back to the black background when launching eve clients?

after the last update there was a problem with low fps on dx11 before that everything was fine.
had to switch to dx9 because it became impossible to play