Very specific fonts can be hard to read

I am not sure if this is the right place to post feedback about the UI but i figured its an understandable mistake to do, if its not

So my problem is with the font used for the amount of ammo in my missile launchers. I am having trouble reading it, and especially seeing the difference between 8, 9 and 0.
The example bellow actually says 10, 18 and 19

I have experimented with adjusting the UI scaling, as well as the font size, but it doesn’t really help much, unless i make it really really large. This is a shame because i can read all other text just fine, except for the number on the ammo indicator label.

This, someone mentioned to me, is the same font used for the expiration timer on the gifts.

EDIT: a user also mention that rn and m can be tricky to read too 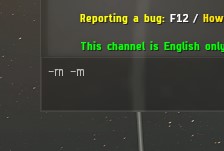 The examples above actually look slightly better here, than they do in-game!

As far as i can tell, this number, is not affected by the setting for the text size in the game settings. I might be wrong about this though. In my eyes, a better font, or an option to use a “senior-friendly” font would solve this on the spot. Maybe find a less offensive name for the option though…

I agree 100%, the font for most of the text in Eve is definitely too small…

Also the minimize/close icons on the various windows are super small. They could be made to become larger when the mouse is placed over them, that way you’ll know you’re clicking the correct icon.

Actually most of the font sizes are great for me. Its just the numbers here that are a but tricky.

Also an other user showed me that the difference between r, n and m could be tricky too. Will update the post when DT is over

In my eyes, a better font, or an option to use a “senior-friendly” font would solve this on the spot. Maybe find a less offensive name for the option though…

The font has been an issue for me for a long while. I have had myopia since 10yo and I’m no spring chicken now so font size is important. I had a 60" tv for a while and it was okay but on any smaller screen and I have to guess if it’s a 8 or 0 and if it’s a m or rn…
While the Photon UI uses up more of the screen space it does nothing to help fonts. Bigger buttons and more padding isn’t going to cut it.
And there’s nothing wrong with “senior friendly”, it’s not offensive.

high or higher in rank or status.

“he is a senior Finance Ministry official”

a person who is a specified number of years older than someone else.

“she was only two years his senior”

Yes, contrast between letters and other stuff needs to be better! I always say “darn” alot and I did not know the R and the M blended together XD. Always appeared I had a foul mouth but me and my corp had a great laugh about it when I noticed that.