Look if you want to keep new players then this isnt the way to do it. Its simply a massive put off. What do you think the player experience is when they start the game jump into jita and faced with all this BS in local and a game that fully supports basically other players stealing from others, blatantly. This is as much a kin to being mugged on the street. Its a terrible expererience, that the first thing they see is this.
Sure corp thefts etc are interesting but these. jesus…

If offer looks to good to be true it is scam, go by that rule and you will be fine.

No, that is not the way to keep suitable new players. EVE does not need all new players to stay, it needs those new players to stay that can understand what EVE is about, what EVE offers you and how to live with EVE. All the other new players that just keep crying and whinging about issues can go to hell and play Hello Kitty, Farmville, LOL or Valorant or whatnot. They have no place in EVE because they do not and will never understand EVE. The only thing they do is to change EVE into something that is not EVE. It is already regrettable that CCP has been catering to these incompetent fools for far too long and keeps wasting time on NPE experiments that drive EVE into the completely wrong direction.

If they cannot deal with these most basic scams in EVE, they will have a much, much harder time with the myriad of more sophisticated scams and will just cry even more later on.

The same prudence applies in New Eden as IRL. Chances are, if you can spot the obvious in Jita you will benefit from that skill in your real life, where scamming and phishing are fairly common.

Also, Eve players usually do not want to be handheld. And we’d like to keep it that way, thank you.

P.S. Corp theft is not a laughing matter for the duped, and it is not taken lightly or “interesting”. Jita scams are just playfulness, in comparison. 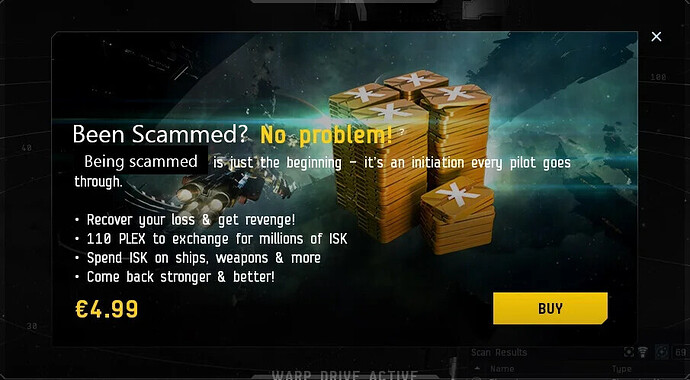 The new players that leave because of stuff like this are the players we don’t want in our Eve. Good riddance to them.

This is as much a kin to being mugged on the street. Its a terrible expererience, that the first thing they see is this.

And killing other players is a kin to being a murderer right?

Whether you like it or not, some people come to eve for the scamming, thieving and deceit. And one of the best parts about this game play is that new players can be the scammers, thieves and deceitful from day one.

Maybe eve just isn’t for you.

Scams are there in every online game I have played.

What I love about EVE is that they embraced the scams as part of the ruthless ingame universe. Other games disallow scams, make it reportable to scam and ban players for scamming. Does that stop scams? Not at all, people continue doing it.

Ban scams in EVE and people will continue doing it here as well, except that now CCP has to follow up on both bot and scam reports. CCP did the smart thing and allows scams, or even encourages scams as part of the gameplay.

Scams are great. Check those contracts before you accept them.

That New Eden will not hold your hand is both daunting and exhilarating and its greatest asset.

OP may I interest you with some cheap 1 mil Geckos?

We don’t want the types of people playing EVE that will fall for every scam in the game. It keeps the riff raff out. Working as intended…

You think EVE local is bad? Filled with scammers? You have not seen Warframe trade chat! x100 faster and worse then what jita local could ever be.

When I was a new player, within two months I racked up around 2b from Jita ISK doubling - which I learned from losing 10m ISK to the same scam.

Scamming is a great part of the game and more new players should adapt and take advantage of it, like I did. There’s not a lot of other games with this amount of freedom.

I love this forum. Year after year it’s the same thing. You could quit for two years, log back in to the forum and you will come back to the exact same threads about scamming, bumping, ganking, and “gibs more stuff to Alphas”…

[Citation needed]
I’m sure you’ve got actual evidence to support and back up this claim, right? Like testimonials, surveys, polls, and interviews with a significant number of new players who quit specifically for this reason but would have otherwised stayed and continued to play the game had it not been for local chat in Jita (and pretty much only Jita). Right?

The last time they responded to a scam complaint they made it so freighters can unload without docking.

Protection of newbie is critical to the game. I’m less than 30 days in, got ganked in a 0.8 system mining with my first purchased ship. That doesn’t want me to stick around- I’m just getting into the routine, getting into the game only to be knocked back to day one. Note to mention the attempt to scam ISK me afterwards. I’m sure the has been lots of conv. but if there is a nullsec why isn’t there a allsec with very limited resources?