Warp to Station not Within Docking Range?

I thought I’d seen it all, but somehow I lost another yacht trying to dock this time. I clicked dock from deep space but somehow a single Drauger wasted me before it would dock? I double checked and my wreck is 80km from the station. How the heck can someone interrupt you mid-warp? Did it magically run out of cap 80km short of the station? This is why we need a replay feature… 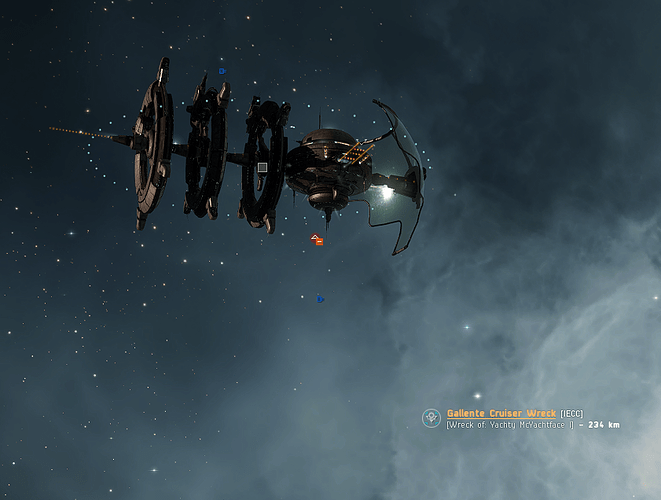 Do you want us to guess? My guess is a warp disruption probe.

That would have been my guess, but I was coming out of deep space… i.e. nowhere along any travel paths. He would have had to hack the game to know to bubble in that direction. Way below the undock, away from any gate routes… I didn’t even warp to the site from the station where he could somehow predict my return path.

I guess hopefully that’s all.

It seems every day there’s a new way to die though… even after ten years you learn the hard way… what else can kill you.

Their is an avenue of inquiry that has yet to be explored! User error. You miss clicked and landed further off the station than intended and lost your ship as a result. Their is no need to feel bad about this and make excuses on a pubic forum… we understand it happens to us all from time to time.

He says he clicked “dock”, though, not warp to… if someone made their warp to default distance 70km or 100km, mistakes could happen… but there’s no “dock at range” default option, dock is dock.

you’re not having very good luck with that station . and the 4th SS istab didn’t save you … not sure what happened , you are well outside the docking ring …
make insta-dock bookmark , either right on the undock (if not a kick-out) or fly into the superstructure and mark it there …

Can’t Draugers use the micro jump field generators? So, you landed a few hundred meters off the station and before you could get within docking range he booshed you?

Yachts warp right through bubbles. It’s literally one of the three reasons that you are flying it in nullsec, lol.

But yeah, the Draugr pilot timed their micro jump with you landing on station, or maybe you landed 2 km off the station giving them time to jump you before you could reach the docking radius.

It was one of the “Dock” buttons that appears in the Agent Mission drop down on screen in space… bubble immunity is 100% so it has to be either the yacht ran out of cap perfectly within microjump range, the “Dock” calculation is unreliable, or the server severely crapped out and misplaced my warp target. If only I had had shadowplay turned on I would know.

And I said “miss click” which means he made a mistake! I am quite sure he “thinks” he clicked dock as this is what he intended to do but as something else happened we have to explore the most likely reason which is user error.

This is true, this happens quite a lot as I return from missions. You click dock and then have to travel a short distance to get within docking range. I’m still sticking to my thesis that the OP messed up though.

I’m inclined to believe him because there were reports a few months ago of people dying in Trig systems who had told their ships to dock (not warp to) a citadel (not a NPC station)… and the ship never docking.

EVE has glitches sometimes. Even beyond the new chat system from the Amazon cloud.

That’s why I always “warp to zero” and then dock after I arrive, when I want to be sure of docking.

(I don’t have the patience to set a bookmark.)

Another possibility I haven’t seen mentioned is that maybe the OP got bumped? If your ship makes direct contact with another ship or object it can fly off in a random direction. The bigger the ship’s relative size to yours, the further you fly.

That’s why I always “warp to zero” and then dock after I arrive, when I want to be sure of docking.

(I don’t have the patience to set a bookmark.)

This does not address the actual issue that the OP mentioned and is in fact, actually the problem that is being brought up in the first place.

When you “warp to zero” you don’t actually land at zero. You land in a small bubble about 2km around where “zero” would be. This means it’s possible to “warp to zero” and still land outside of the actual docking range of a station. This leads to the problem OP mentioned.

What most likely happened in OP’s case is that he “warped to zero”, and landed outside of the docking range. While his ship was slowboating to try and reach the docking range of the station, the Drauger (a T2 Comand Destroyer) was able to use it Micro Jump Drive Generator and launched (colloquially referred to as “booshing”) both itself and OP 100km away from the station. What happened afterwards is pretty obvious.

A bookmark would have prevented this since you cannot be booshed while in warp, and docking would be instantaneous had he landed within the docking range.

That would explain it pretty well. Maybe the reason she was at 80 km instead of 100 is because they teleported through the station itself and she had ended up on the other side?

Also good to know “warp to zero” isn’t guaranteed. I haven’t landed outside docking range yet, but I’ve only been doing it for a little while.

You’re a target as SOON as you’re on grid if I’m not mistaken?

If he’s an instant locking sniper then blap?

You are mistaken - you cannot be targeted until your warp phase is completed, but will show as on-grid before that process ends.