What's going on with Wine?

@CCP Just wondering where we are at with the current state of Wine? The 2.* versions seem to crash the client. I have asked in other threads, but it feels like you guys are just brushing us off. Help us help you! Inform us about what issues your seeing or not seeing but hear about so we can see about testing for you.

Thank you and all the best.

As we have gotten a new game patch, I’ve decided to check the status of the 2.* branch of wine again.

Never Mind - seems last nights no crashing has lead to this mornings crashing. Like a lot of crashing.

I am also experiencing trouble. The game seems to freeze and crash randomly. I‘m a little bit sad because I have no idea how to fix this issue. There is a myriad of combinations of configurations in the launcher preferences.

What branch / version are people using that isn’t crashing a lot (if any)? I just came back and it’s pretty unplayable on the default CCP latest stable

Can’t turn audio back on without the client freezing. I have to force quit to log back in. I’m stuck without sound and have been for weeks.

What version of wine? Will need more info, plus log files sent to CCP to help!

Since I feel like I’ve tried a lot of combinations of things with client settings to get something more stable, I thought I’d see what all the details are the others are using. Currently I’m still often crashing at gates - jumping into and off of primarily (though not exclusively). 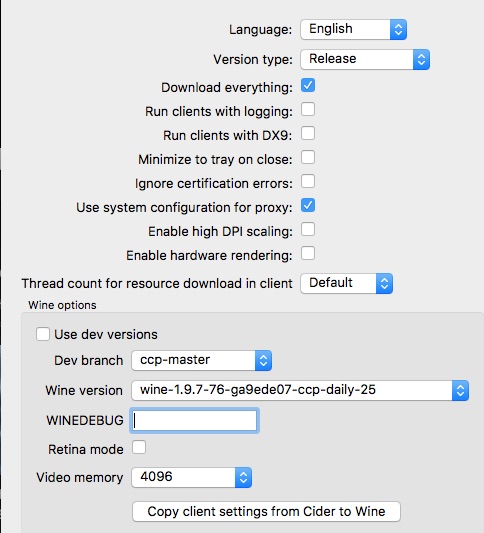 Looks like it’s been an issue at least since end of last year judging by this archived thread:
https://forums-archive.eveonline.com/default.aspx?g=posts&t=501229&find=unread

Now I can station dock without crashing consistently.

Would be nice if CCP would reply.

I also had session change problems with the “ccp-master” Dev branch so I changed to the “winehq-stable” branch using the “Latest” wine version and the game has been 100% stable for me.

I’m not sure what is worse with this version over ccp-master but everything seems smooth…what is the trade-off?

If you use the wine-hq you don’t have the “command key” hot keys for one.

Yep I’ve continued to try different versions and some crash less than others, but they all seem to crash. Tried the Latest winehq-stable among others in the stable, winehq-master and ccp-master branches.

I can’t tell that “run with dx9” makes any difference one way or the other. Can only hope that when something blows up due to session change crash that CCP will replace it…

@CCP_Snorlax don’t know if this is your department, but I know you did a lot for wine! Can we get any word from you all please!

Your logs indicate you are running out of memory - the main cause of crashes under Wine. Running at lower resolution helps, and/or lower quality settings. This isn’t so much a question of available memory in your machine, it’s the 32bit address space limit of running a 32bit process. There is some memory overhead of running under Wine when compared to Windows, and that is enough to push the client over the edge sometimes. The Retina displays on Mac also encourage high resolutions - maybe we need to start limiting the maximum resolution.

Would that also be the reason people are crashing on undock, gate jump etc?

There is often a lot of load activity on undock and gate jumps, which can spike the memory use, so that is likely, yes.

Okay, so I just tried the current CCP-master

Picture of set up http://prntscr.com/g986wn

I run potato mode on my computer, and jumped one of my alpha accounts like 7 jumps and didn’t have any issues. So the undock and jumping didn’t seem to crash it anymore.

There is often a lot of load activity on undock and gate jumps, which can spike the memory use, so that is likely, yes.

Would that load use be related in a way to the massive “cancer” of prior upwell structures not being well optimized!? Cause six months ago, I had no issues. Then we started this thread when problems started to arise, which CCP had just upgrades to the 2.* wine family back around July (maybe a little earlier). We have had a few improvements to the wine as well as to the optimization of the Upwell structures since then, (thinking out loud) which would lead to it not wanting to crash our computers do to the ram limit!

@CCP_Snorlax With CQ gone, and the client being able to move to 64 bit (thats what the dev-blog was saying was a major hold up), will WINE support that or are the Mac users still going to get left behind?

im a stupid should I

And the wine problem is getting worse …
cannot run a single client on low graphics at the moment without Wine blowing a gasket
simply opening the fitting window or joining fleet is causing shutdowns
https://pastebin.com/hytA5qtC
If you let me know how to send the .dmp files I will do it … but currently unplayable