Why isn't "carebear" labeled as derogatory language yet?

I seem to be making my way back to EVE ONLINE but here’s a question.
“carebear” is a derogatory term referring to anyone that doesn’t pvp.
Why isn’t the term “carebear” labeled and treated as a derogatory term towards miners on forums?
This is in fact is what the term is used for. I just don’t understand why CCP allows for such.
You could actually search the term “carebear” and find it used as such in so many posts on the forum.
Yet, what if this was harmful to someone? If we are entering a new age where we should care about the mental state of EVERYONE within EVE ONLINE, this probably should be one derogatory word that should be phased out.

HTFU. It’s easier if you watch the video: 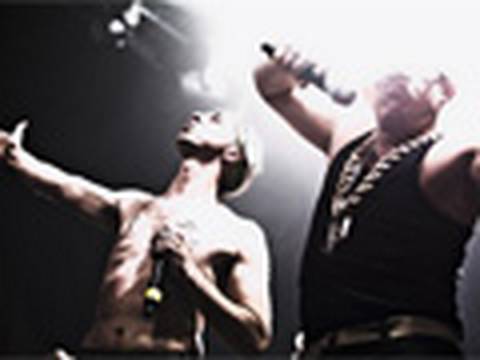 Proof that it needs to be phased out.

Carebear - has slightly different meaning, as not all miners are carebears. It’s more an attitude to the game, than a specific playstyle

There are lots of terms and it’s all water off a ducks back. It doesn’t hurt anyone.

good show. I edited it to reflect “industrialists” instead of just miners.
Yes its still a derogatory word though as the others you have referenced.

Yes its still a derogatory word though

Yeah but so what?

You want people banned for calling someone a nullbear, or a krab?

Technically, under the existing TOS the use of any derogatory term is already banned, but if the argument is that CCP should step up their policing of language, then where does it stop?

Easiest just to take it as a compliment and/or ignore it.

Since you asked nicely.
Yes,I think that CCP should police language used on the forums a little better.
Yes, this would go a long way to provide a harmonious forum location. Can you imagine a forum without the use of any derogatory terms, where people actually used roles like they do in other games? Like industrialist or the miner. Or that person in low sec.

The use of any derogatory terms and the acceptance of them, no matter how small it may seem , is what makes it spread to even worse ways to label players.

Yes,I think that CCP should police language used on the forums a little better.

A “little better” doesn’t fully answer the question. Where should it stop?

At what point is a word derogatory that CCP should apply a ban based on? Or in other words, where should the line sit; and if the line is moved to some other place to where it is now, then what happens when people start using words that sit just the other side of the line, but are used to express the same meaning?

Should “go back to WOW” get a ban for example, which is already used as an alternative to Carebear?

It’s a lot broader than industrialist.
The irony of it is that those who typically let fly the ‘carebear’ term are, indeed, the carebears of carebears, though they like to project as though they are big bad wolves…

The irony of it is that those who typically let fly the ‘carebear’ term are, indeed, the carebears

If the last 10 years have demonstrated anything, it is that there is no lower limit to what people can be offended by.

In the olden days, people used to get literally killed or maimed by insensitive jerks. That was a problem. Now we are at the point that people cannot even stand non-vulgar terms that demean competitive choices made in a video game.

“carebear” is a derogatory term referring to industrialists CODE

“Cooking with gas” is offensive to the environment. 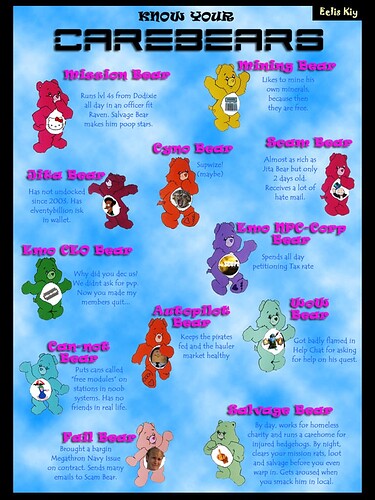 “Cooking with gas” is offensive to the environment

Not according to the influencers co-opted by the fracking industry.

The term “carebear” is indeed toxic, but it is not the only one you will find being used by the community to target and abuse players who engage in protected gameplay activities.

I, for example, have a rare condition that makes me attack miners and industrialists in-game, and take their items and money for myself. Because of this, I experience a severe degree of systemic and targeted persecution by other players, as well as a trampling of my rights as a PoC (proponent of criminality), every single time that someone calls me a “griefer” in EVE or here on the forums. It is a very derogatory term, and players should not be allowed to use it as a foil to dehumanize and oppress a disadvantaged minority group member such as myself.

If someone needs to refer to me, the only acceptable way to do so is by using the terms “belligerent undesirable” or “empathically-challenged nonconsensualist,” and not by an unacceptable slur like “griefer” that exists only to harass and bully players based on the color of their safety button.

Good thing this is a vidya game, isn’t it carebear?

Why do you care so much about bears you carebear