YC121 Guardian's Gala, or how not to run an event

I get that CCP is trying new things and moving in new directions. I get that there will be missteps along the way. That being said, I am wracking my brain trying to figure out who thought the reward structure for this event was a good idea.

First off, lets address the ore. You need 1000 units to reproc, and you get 2 tricarboxyls per 1000 units if you were to have 100% refining efficiency. Also, there are only 2496 units per gala site. With a character that has an 84% refining efficiency, I managed 62 tricarboxyls for hours of mining over two nights. So yay, I can turn in 12 tickets. This is a horrible time to reward ratio.

And then we have the containers themselves. I did have a small stash of tricarboxyls from previous events, so I managed to get enough to do 20 turn ins. I managed to get a VIP gala site clear, and opted to do the turnins there, as surely the VIP boxes that cost 25M isk per box, a gala ticket, and 5 tricarboxyls should give me some nice items! So, 500M ISK, 100 Tricarboxyls, and 20 Gala tickets later, I ended up with about 100M worth of items…

Yes. This is the first event that ignoring ship losses, just by running the event itself, you will end up ISK negative. Granted, maybe a small number of players will “Hit the lotto” so to speak and get some nice items that will make them a profit, but given the time investment, it still probably is not worth it.

This is what makes this a bad event. Previous events may not have been the most profitable ventures compared to say Super ratting or WH ratting etc, But I literally could make an alpha, throw it in a venture, and go mint veldspar in HS and I would make more ISK than I would on this event.

I am not even upset with the “loot box” reward structure, but asking us to pay ISK and more Tricarboxyls than we can acquire in a site is ridiculous. If the reproc amoun on the ore was 100 instead of 1000 units to reproc, and there was not a ISK cost (or a nominal cost, like hundreds of thousands, not millions of ISK) this would actually be pretty good. As it is, it is just not worth the time unless you want the skins you can get from the point rewards. As for the Spirit skins, you would be better off buying them from previous events.

In closing, I hope that CCP addresses these issues quickly, or addresses them and extends the event. As it currently stands however, this is the worst live event to hit Eve since I have been playing.

Unintended plus side = I had a bunch of ore from the Halloween event left over and just realized it makes the same mineral needed as this event. Yay easy 1b profit.

This was my experience as well. Ran a few sites in high sec. Blapping the rats was fine. But the salvage/ loot from the rats was pathetic, and if I wanted a ticket to access the hub I had to find the random wreck where it dropped, which was tedious. Then I paid 13 million ISK and 5 carboxyls to get a crate containing … a 1 million ISK synth booster.

Plus grinding the reward steps seems to take longer than it did with Drone Swarm.

I enjoyed Drone Swarm. This? I have better things to do.

i spend 64 mill on a total of 3 normal boxes and 1 vip box i got back not even 10 mill in prices this whole event is one big scam at least make the price have the same value as the price of the box 25 mill spend got a 1 tier overseer box don’t know about you all but i feel pretty F*** .

I absolutely agree. I’ve spent at least over 70 million isk on getting those prize boxes, and the best I’ve gotten is a 13th level overseer’s box thingy worth a little over 13 million. The others had drugs in them worth 1 million or less. There are really are hardly any other drops to speak of other than those tickets which are really worth next to nothing as they are so common place.

Trying to mine and process the minerals is really a fruitless waste of time. You have to catch a site being run or have 2 Omega toons where one runs the site and the second comes in to mine it right after to get the piddly amount of ore that you can get.

Maybe CCP is trying to be like the US Federal Reserve Bank and is trying to suck isk back out of the game’s economy as it appears that possible hyper-inflation has crept into it. That does make this event a scam event.

I’m behind this complaint…to say nothing of the fact that the Agency challenges are bugged.

They aren’t reloading new tasks once you complete them!

I’ve already submitted bug reports. I’m about to test whether logging out and logging in fixes this…
Test Edit: It does not…neither does resetting your cache, and this affects me on 2 different computers. So I’m getting 20-40 points per NIGHT rather than hour!

At this point, I’ll take Permafrost 2018 with its white-out headache-inducing glare over this…

‘/emote sighs’ I was REALLY looking forward to this event too…

So, here’s my list:
The Good:
+they fixed the damn camera restricted functionality
+no headache-inducing white-out screens
+sites look pretty

The Bad:
-Agency tasks sometimes don’t reload (event-breaking) As of 15-FEB-19, for me, this has been resolved As of 16-FEB-19, this issue has returned and still persists!
-no bounties on targets
-VIP site is absurdly difficult for the solo pilot, with disproportionately low rewards compared to difficulty level, even for skilled pilots
-site spawn is low compared to previous events
-too few ore units (2,400+/-)
-disgustingly low mining yield, absurdly high requirements
-fireworks lagging my system
-Spirit SKINs apparently don’t drop from kills
-battleship sometimes drops no loot
-item trading system cost versus reward is poor
-beacons still spawn in new-player training systems

With the “entry” fee the total amount came to 1b isk. From that i could of bought twice what dropped at least from the market. Since the site doesnt offer anything new but reintroduces old skins. And already purchasable items.

I look forward to events, usually… The last event required that I mine and the only decent things you could really get were skill based items and those were bpc’s. In my opinion, dropping a bpc for an item I can hardly use as a high SP player, is lame. It was pretty much worthless to me.
I ended up having to wait a day or two between the times I could run the event because I could not move onto the next step until I did some mining, which I find to be the most boring of activities in EvE. I ran what I could between working swing shifts and family time and could not finish the event because I couldn’t move forward.
Now this event is even more worthless.
I find I have to mine, I have to PAY to develop any reward, and I can’t move ahead right now during the couple hours of play time I have this week due to ‘having to shoot players’ which is something I do not do. NRDS is a big player base in EvE and I find it completely insulting that CCP would even consider adding PVP content to an event.
If you are going to do a PVP based event activity, offer those of us who only participate in PVE something to do as well. 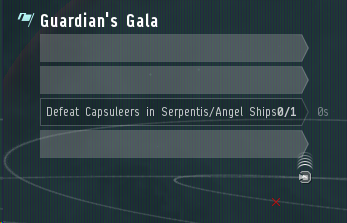 I filed a Support Ticket - CCP indicated to me that the best way to get the Agency tasks reloading error resolved is to file bug reports. So I did - two in fact. I recommend ya’ll do the same.

This event is pretty trash. needing more ore than a site provides is absurd. CCP, you’re honestly making me not want to play the events anymore.

I got Garbage two times it that boxes…

Logged in today and the same status.
The only option I have is to shoot someone.
I’ve played nearly ten years and have not shot anyone except in self defense or in scrimmage with friends.
I guess 35 points is all I can get.
No more event for me.

Yep this “event” is crap

Okay, so, for me as of today, my achievements are working! I hope that’s the case for everyone else.

As of 16-FEB-19, the challenge reloading bug issue has returned to my client and still persists! I am unable to effectively play this event.

Okay, question: How in God’s name do you solo the VIP room if even a Machariel isn’t big enough to tank this crap? And anything smaller than a Battleship doesn’t seem to have the firepower to even dent the shields.

And why do these beacons keep spawning in new-player training systems?

I did it with a Geddon, a Domi, and an Auguror, Domi got into hull, but managed to kill the carrier

…sounds like you used 3 ships to clear one site…

I can tank the carrier and its initial escort in my Machariel alone just fine…but I don’t have enough firepower to break the shields, and I have maximum skills for it, with implants. When the fighters show up, however, my repair systems can’t keep up and I’m forced to withdraw.

I have to say the worst event so far! Not only is the grind the most hediouse for an event but you have to buy the items on top of it? Wow! Don’t waste your time. CCP should be ashamed of this event.

I can solo the VIP site in a passive Rattlesnake with Pith x type kinetic + explosive hardners , t2 cruise launchers with scourge fury or nova fury missiles + a gecko about 1500 dps and can tank more then 1500

If I go into a clean ( no one tried it ) site with a thanatos my tank balances on about 65% shield /
Last one I did someone had been in and made the mistake of shooting one of the “fighters” ( this spawns a second wave of fighters being launched from the carrier , I burned the thanatos down with my shields bottomin out at approx 34 %