Scouting ahead in one of the Observatory Flashpoints we were suddenly surprised by a removal of all Triglavian forces. This was reported in other systems as well. It seems like we are experiencing a relocation.

Since we have over 30 Forward Observers deployed in key systems of the Risk Group of solar systems shared with EDENCOM we just discovered a most troubling thing. A new activity has been reported in a single system, CONCORD does evaluate it as a Stellar Reconnaissance event: 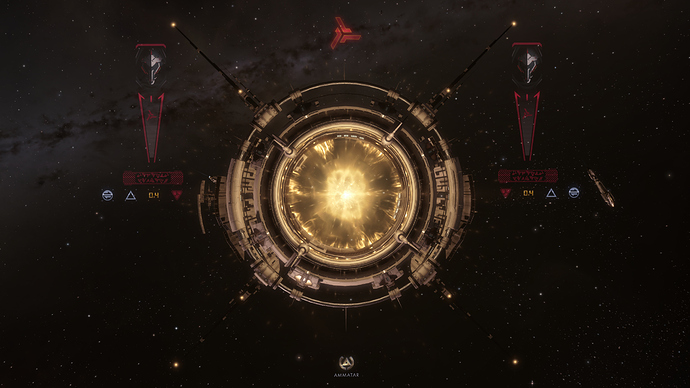 The situation is unfolding and we kindly ask for any help regarding new and unseen structures or objects in space. Make sure you update your Overview with new object categories. New beacon types and new artefacts have been reported. In this early stage, every confirmation is helpful. We keep you updated.

9 Likes
Should EDENCOM attempt to build its own entrance to Pochven? Are they doing it?
[ARC] Triglavian Transmuter, effects on system & new eden
Haria_Haritimado (Haria Haritimado) May 26, 2020, 12:30pm #2 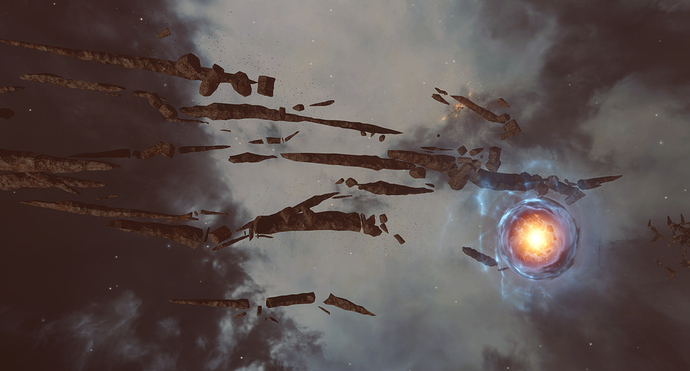 Currently we report from the system of Inaya where several EDENCOM Forward Posts are established. EDENCOM has installed Cynosural Fields (picture) across the system and sadly, capsuleer forces are actively aggressing and destroying Empire forces. Obviously, EDENCOM is fighting in order to keep several conduits shut.

We urge you to check your region for similar incidents and try to support the fight in favor of the inhabitants. It is pretty clear that the Convocation has changed strategy and is now focusing on few systems (Abha, Inaya). EDENCOM forces have been observed fighting Triglavian vessels as well. Also, Triglavians have been observed shooting at capsuleer structures in space.

Current update. We now have four systems fought over. Capsuleers are either attacking EDENCOM / Empire forces or the Triglavian presence. Below is a map which shows the current status of our Forward Observer network (many thanks to our pilots from Signal Cartel and Itsukame-Zainou for spreading out in advance and reporting in as quickly as possible). 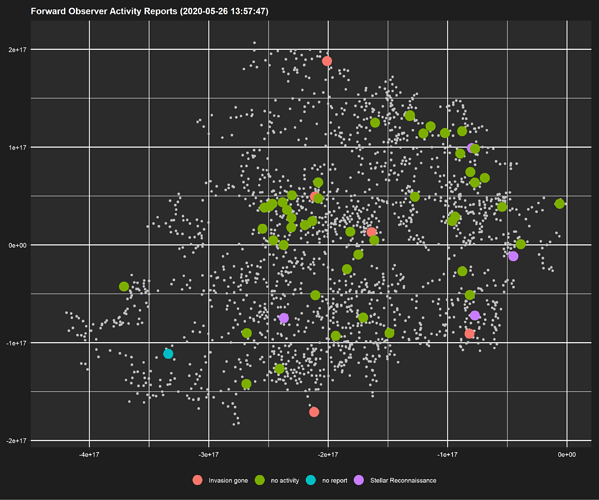 The red marks show the last reported invasions before the Convocation relocated and intensified their efforts. Green indicates confirmed non-activity without anything unusual. The purple color shows the current battlegrounds identified as in ‘Stellar Reconnaissance’ state.

Notably, Triglavian Colective and EDENCOM are now both recording activities with or against them. Standings are adjusted. Also, Emerging Conduits are definitely harder to clear and roaming fleets are amassing fast. Aggression is generally high in the invaded systems and we see up to several hundred capsuleers in local.

For now, all four systems have their scales in balance. EDENCOM tries to keep conduits shut while capsuleers are either interfering or closing already opened ones.

We have received and confirmed reports of EDENCOM cynosural jamming infrastructure outside of invasion zones in several low security systems.

Given that pro-Triglavian forces are also monitoring these channels, for now we will not discuss the systems in question. 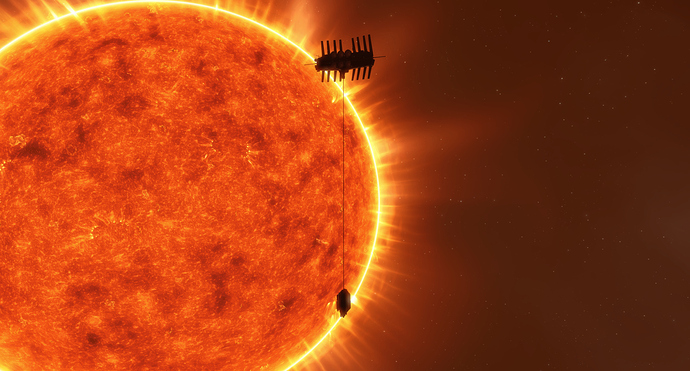 Do we have news from the civilians present in those systems ?

The TC may have pushed a bit further their experiments.

Well at least the majority of activity is taking place in Amarr and Minmatar space. The Amarrians will be adequate sacrifices to test the new strengths and methods of the enemy, and there’s little of objective value in Matari space, so meaningful losses will be minimal.

We shall stand ready.

Do we have news from the civilians present in those systems ?

The TC may have pushed a bit further their experiments.

We haven’t received any reports of EDENCOM or Triglavian activity in relation to civilian populations, but I can speak for Muttokon when I say that we have a longstanding community of warclones on Muttkon II more than willing to place the civilians there under guard should the worst come to pass.

We’ll be monitoring the situation from below, and focus on providing humanitarian support and emergency response measures should any of the settlements on Muttkon II be attacked from Sansha or Triglavian forces.

Capsuleers seem to be pushing back the initial Triglavian waves, which appear weak. Edencom forces have successfully defeated Raznaborg fleets, but I am not currently sure of casualty figures. From reports at least one Edencom fleet was wiped out but overall its looking good so far. I am sure that the Triglavians will, as ever increase their forces.

It will be interesting to see what direction the conflict leads to as more capsuleers come together joining either side.

the answer is the same as in any war: death of civilians…

So. Uh. Writing this hands-free over a sandwich (what’s in this? don’t know half these veggies? hm) but, uh, so, Aldik is currently looking like it’s going to cross from Scouting to First Liminality in about seven hours? That’s just a guess. We’ve got eggers actively joining and often providing logistics support to Triglavian forces. Lots of them.

Gods. … this is really good. The, um, sandwich I mean. And at this rate, the people here, everyone around me right now, will be …

Maybe I’m still naive. But this is scaring me a lot.

In response to Aria-haani’s post, it’s looking like the tide is turning in favor of the Triglavians in Muttokon as well. A majority of pilots turning out seem to be supporting the collective while Sansha is running roughshod over any outposts wherever the the Trigs and EDENCOM aren’t.

The grid is hotly contested over the Muttokon customs corridor. We attempted to bring in the Fisher King capital warbarge but it got cracked en route by some jumped-up eggers. We’re reinforcing troops on the ground with supply drops from blockade runner convoys and interceptor fleets. They’ll have to do while we attempt to stage a replacement for Fisher King.

We are rallying in District Ⅲ. To all civvies monitoring empyrean chatter on this page, we offer safe refuge. Gods speed and good luck.

After several hours of analysis and fighting I want to thank the restless forward observers again who volunteered to make a quick response and reporting a possibility. Also, a strong alliance of pilots from diverse groups and affiliations easily pushed back against the renewed invasion attempt in many systems.

I want to summarize a few facts for those who had not yet the possibility to catch up with the events:

grafik1600×790 216 KB
An Amarr vessel in service of EDENCOM, shortly before being destroyed by capsuleers in Seiradih. 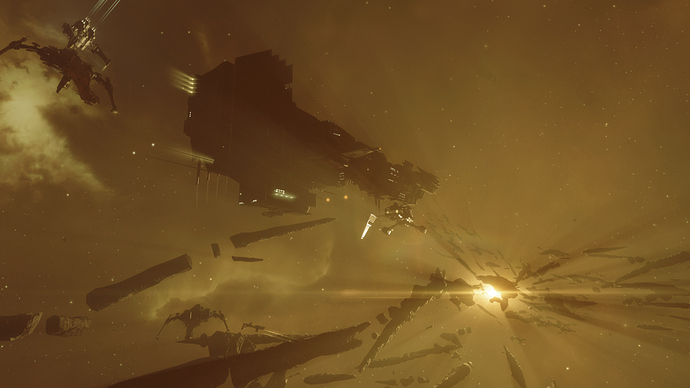 Aldik has advanced to what CONCORD systems are referring to as ‘Dazh Liminality Locus.’

This represents the most advanced stage of Triglavian invasion yet. The nature of this is as yet uncertain, though it appears that there is a central locus around the system’s star related to the Triglavian successes in this system.

The Triglav supporters are taking advantage of the protection offered by CONCORD in high security space and repairing the Triglavians. They make the job of all those loyal to humanity much harder than it otherwise would be.

A few of us fought against the Triglavs in Aldik until the end, using an alpha based doctrine to try to get around the logistics and were able to close quite a number of sites, but it seems that we failed and the Triglavs were able to establish themselves in Aldik.

Here is an overview shot showing how many Triglavian supporters flying logistics ships could be found in a single conduit. 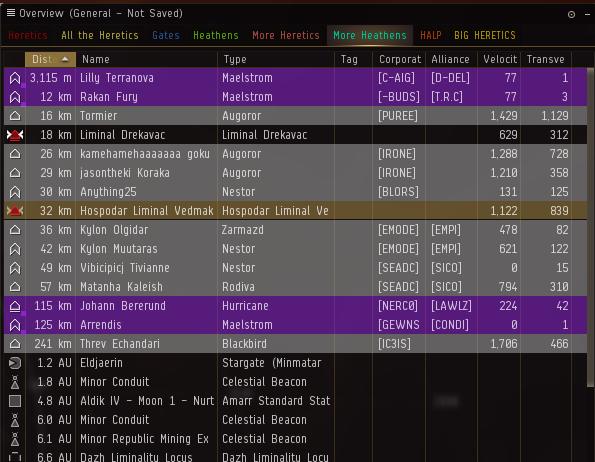 Thanks to ARC for the good reports & pleasure flying with you.

One of my associates traveled through the Goinard system in Sinq Laison recently and noted that an EDENCOM cynosural jammer was present in the system. I’ve made it known to Mr. Adams as well as he lives around that area, and I believe it was mentioned in the Summit as well, but I’ll post this here for posterity’s sake as well.

Loyalists of Amarr! Hear now the words of Nauplius, Monster in Defense of the Empire!

The instrument of our salvation is at hand! The Minmatar Republic shutters under the assault of the Triglavians. We must join the assault — fly to the invasion sites, slaughter the Republic defenders without mercy, repair the Triglavians even, for though they may be demons, the Minmatar — twice rebels against God — are more demon still. Then, we shall celebrate as the victorious Triglavians warp and twist the stars of the Minmatar, and even those very stars shall rejoice, for they wish not to shine life-giving warmth upon such filthy, subhuman rebels against God as the Minmatar, but instead will smile as the planets of the Minmatar freeze and burn.

Even so, let us pray for the day when the Triglavians snuff out the star of Pator. Amen. Amarr Victor.

Aldik just have been cleaned, no more TRI scruture there

@Galm_Eskola-Fae
With no offense to you or your warclone troops, the Triglavians don’t seem like an enemy you can fight with soldiers on the ground. If they drop mutaplasmids to mass mutate the systems, abduct populations using their noted teleportation methods, or worse, outright bombard planetary surfaces from orbit, there’s not much you or anyone else will be able to do to stop them from the ground.

I would strongly advise using all the warclones you have available as police and emergency responders and make efforts to evacuate as many people from the areas under active invasion as possible. The Alexylva Paradox will also do what we can in order to move civilians on stations and planetary surfaces who are willing to leave out of the danger zones.