Doctor Who x Eve Online from a newcomer perspective

Hello there, as a big fan of Doctor Who and sci-fi in general, I was really very excited when I heard about this event. Firstly, because it meant that we’d have the first Doctor Who thing in an mmo ever, secondly because it would give me the perfect opportunity to play an mmo I’ve been hearing and watching about since decades.
So, i created an account and started playing one week ahead of the event’s starting date, thinking that it would allow me to fully enjoy it.
I even bought a starter pack in order to get the most of this week, but now after two weeks of playing and a week of event, and after buying another pack to get 14 Omega days, I’m realizing that I’ll never be able to do the Combat Sites Tier 2 and above before the event ends, because the required skills for the ships capable to win these fights take a month of learning time, even with the omega doubled time.
With the recommended ship for the exploration part of the event, the Probe, it’s almost impossible to hack the Large ruins, let alone the Huge ones. So I bought a cheetah thinking it would give me a chance to hack those Large ruins, but I’d need 29 days just to master the required skills to be able to fly it.

The event is great, but if newcomers can only see the half of it, and get half of the items and rewards, is it really this good ? An event like this, especially given the amount of grind time and required skills / ships / in-game money, should last a month at least, so all players would have a chance to really have fun and get the rewards and items.

The best and worst part about it in the same time, is that it’s not even a cash-shop event like some says, because we can loot cool doctor who skins in-game like the t-shirt they sell in packs, so you don’t need to pay but also because even if you pay ( and I bought a starter pack and a doctor who nebula pack), you won’t be able to loot the biggest rewards ruins neither go above T1 combat sites.

I think CCP wanted to create an event that had different parts that for different parts of the player base. (I’m just speaking about their intentions… whether CCP actually succeeded ,or not, depends on who you ask)

The wanted to make it accessible for new players basically from day 1 old as they said, with the probe-able Convergent sites and the Curious filament sites. The small cans are the starting point, with the medium ones giving a bigger challenge. Then after a bit of training the Precarious level 1 combat sites are do-able.

As far as I can see the Dangerous level 2 combat sites are designed so that even new-ish players can do them if they team up in a two-person fleet.

CCP said that they also wanted to include some content that would be challenging for experienced players too. They didn’t want to leave them out of the event. Which is the huge cans, and the level 3 and 4 sites.

Basically CCP tried a balancing act. They wanted to make the entry accessible to brand new players, while at the same time providing content for existing and experienced players too.

I don’t know if any of the rewards are locked away from new players. I personally have not seen any evidence to indicate this, because I had the same skins and boosters drop from low level Curious sites as the high level sites. I think the only difference is the higher levels has a higher chance of dropping them. In fact from many of the huge cans I only got metal scraps and T1 junk salvage - very few (very very very few) of the huge cans are loot ‘treasures’. So new players can get the same types of rewards, just not as many. Which makes some sense, to me at least.

And also, welcome to the game! I hope you have had some positive experiences here and will have many more. No game is perfect and not every aspect of Eve appeals to everyone, but I hope you enjoy it nevertheless.

Just curious did you use someone’s ref link to sign up so you get 1 mil unallocated SPs?

Also are you on reddit? Because if you are active on the Dr Who sub you might be eligible of my related giveaway plus also have some other giveaways for rookies unrelated to reddit.

r/doctorwho - Before you register for EVE Online...

So I think you might have got some bad advice. I just logged in an alpha character to see how difficult it is to run these in a Probe. I used this:

The important part of this fit is the Small Emission Scope Sharpener II - this increases your Virus Coherence. This gives my Alpha Char a Virus Strength of 25 and Virus Coherence of 90. If don’t get these values you should look to train up the Archaeology Skill (in this case I have level III).

The Inertial Stabilizers, Microwarpdrive and Cap Battery are only there to make moving around the filament more efficient.

With this I was able to hack all bar one of the cans in an Tier 2 - Enigmatic Filament, although I think I got quite lucky with the ‘Huge’ hacks and I know that even the ‘Large’ hacks will defeat this fit in some cases. The loot I got out will more than cover the cost of the Probe fit. 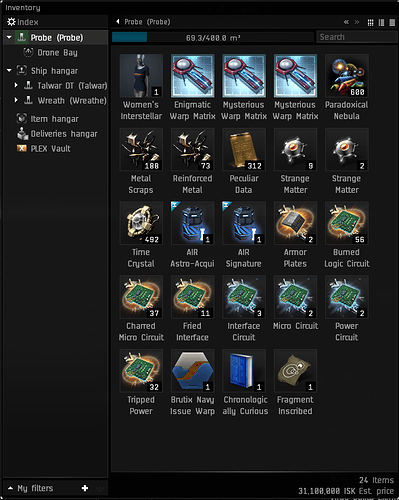 You can further improve your chances by using the boosters that are dropping in the event. There are boosters for Virus strength, virus Coherence and Relic analyser range. You can use all 3 at once, but the higher level ones are quite expensive. I’m not sure the level 1 strength bonus will make any practical difference but the level 2 version should be enough to help in some hacks.

TD;LR;
Use - Small Emission Scope Sharpener II
Train Achaeology
Use a booster or 2 if desired.

It’s definitely possible to run the event as an alpha.

I agree that the event itself is far too short in duration. Anything the engages the market and industry will take time to propagate. If you’re not an explorer or industrialist this event kinda sucks. I love how it is instanced and how it uses filaments even if their nomenclature is cryptic.

Maybe not that answer/(part of a solution) you are looking for, though you can enter the combat sites together with someone else , which makes them “easier” to complete (yes, yes, I know, this is EVE and if you are new/don’t have in-game friends (yet) you can … let’s say … could end with the short end of the stick with a higher probability than in other games, though there are also more than enough players that will play it fair-and-square; I am not sure if you can enter the explo sites with someone else, the combat ones for sure however).

On the matter or the reference link SP that was mentioned above: if you didn’t use one before making your account there is a chance that you can still retroactively obtain these (not sure though how long after making an account). NthDimensional has a vide on on youtube with the how-to and an added 1 million SP might go a long way to make things easier.

Yeah I used a referral to get the skill points, but I’m still 30 days away from mastering Cheetah or T2 battleship.
Thanks for your giveaway

I would advise against training for a T2 battleship for this particular event. The combat sites allow standard Tech 1 cruisers only. Omen, Maller, Moa, Caracal, Stabber, Rupture, Vexor or Thorax.

I use the Probe tech 1 exploration fit from the in-game fits, I bought Small Emission Scope Sharpener II but I can’t use it on my ship since I need the items for scanning as well…

Any idea how to make a Rupture capable of running T2+ combat sites please ? I’m learning Drones V but need 3 days. Or do I need to do it with firends / corporation mates ?

Here is an example that might help for level 1 and 2 sites. I would suggest going with a friend or corp mate. The sites are significantly easier with someone helping.

Don’t worry too much about focusing on drone skills for this event. The Daleks hate drones and you will probably loose a few drones. Your drones are basically there to add small bit of extra dps while the saucer is alone… when the Daleks spawn pull the drones back in.

Some tips:
Destroy the sentry guns as soon as you can.
Fly through the boundary wall to ‘jump’ to the other side to end up close to 2nd sentry gun.
Destroy the Daleks whenever they spawn. They do high-ish damage and will neut your capacitor.
Try to outmaneuver or outrun the guided bombs. They are slow, but if they hit they will neutralize all your capacitor.

getting skills to V is more for long term play, since skills train in real time.

Thank you for the fit, I took the one in-game but will try yours.

May as well buy a second probe hull. That way you have got one that will allow you to scan the HS sites easily and one to run the filaments in.

This is a good suggestion.

Also in many of the harder hacks (red hacks) knowing and understanding the board can be more important than pure brute force of the module. Google the rule of 6 and watch nthdimensionals hacking guide. There will be boards that are difficult and you may fail a couple of times but knowing the bits and pieces above is basically another skill level in using your relic analyser

Yeah that’s what I did so I could use the lv 2 optimization mods.
Thank you all for your replies and trying to help.

Yep. We forget just how non-obvious everything is in Eve when you first start.

This is not meant to be a snark comment, but to understand what an actual new player would log in with you’d have to not have much of a clue about fitting ships with things like inertial stabilizers and the other stuff.

It would be an excellent idea is CCP could get feedback from the real new players and how they got on with this event.

But those new folks who survive this will certainly be good scouts in short order.

Well my feedback is that I love the event and I’m happy that I could get the t-shirt and other items from Doctor Who even if you can’t do anything with them, but it’s really frustrating to fail most hacks above medium and to see the price of men / women Proper Dapper Outfit that I will probably not be able to get.
I’ll do as many exploration sites as I can and will try the T2 combat in two days ( waiting for some skills to be learned ) but I doubt I’ll manage to get the Doctor’s outfit.
And considering the price on the market, I will surely not be able to buy it neither.

The hisec “Warp Matrix Convergence” sites seem to be a bit rarer now. PIA for progressing on the 0 to 900 tasks. AND less new player friendly. But is is keeping me busy. I have the armor now. When do I get a piece of K9? Like his tail or head or something like that? Just kidding.