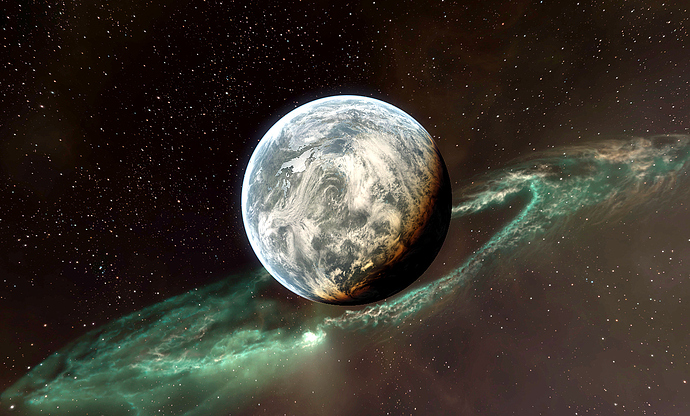 Findings from an initial survey of U4-Q2V III for suitability to host advanced industrial operations to support biomedical applications (Project Daedalus) are set out below. We confirm environmental criteria are satisfied but recommend further due diligence on social risks arising from the presence of an unregistered human colony.

The planet orbits a warm yellow main sequence star (K2 V class) at a radius of just under 1.5 AU. It has an average temperature of approximately 278K and gravity slightly lower than standard. Biomass, which has followed a familiar structural evolution given the environment, is concentrated around a fairly narrow equatorial belt, most of the higher latitudes being permanently below the freezing temperature of water. As with endemic species, the equatorial belt represents a restricted but conducive environment for supporting human life with minimal technological intervention.

Comparing tectonic activity to solar irradiation, we recommend a geothermal solution for power and heat (until a fusion plant is justified). Any of the three large equatorial river basins would provide adequate water supplies for Project Daedalus’ human and industrial consumption. We recommend the southernmost of these (River A) as it has the most favourable sediment dynamics and overlaps a number of promising geothermal sites.

Please find our detailed findings in Annex A.

As expected from orbital scans, an unregistered colony is sited just above the delta of River A. In accordance with our health and safety policy, survey personnel made contact with the inhabitants remotely by dropping radio communications equipment.

Based on radio interviews and drone surveys, we understand the colony to be 83 years old and have an estimated population 15,000 to 20,000 (of whom the overwhelming majority identify as Intaki and are from Rohaanar or related to Rohaani people).

The economy is primarily agricultural, which is heavily dependent on both irrigation and sedimentary fertiliser from River A. Given this, we were surprised at the level of infrastructure development that we discovered (including an aneutronic fusion power plant, a fluid router switch and relay station, and an atmospheric defence system), the need for (and source of) which is unexplained.

Interview material indicates intermittent contact with the Intaki Syndicate, mainly limited to exchange of agricultural produce for manufactured items. There were also references to an unfavourable experience with Caldari and Amarrian capsuleer organisations, on which we will defer to you of course. What was clear, however, that any attempt to interfere in their society (however well intentioned) would be unwelcome and likely result in a hostile reaction. We strongly recommend further investigation and communication before any final investment decision.

The initial planetary survey of U4-Q2V III recommended further due diligence on potential social risks. This analysis has now been performed and a summary of New Information and Recommendations is set out below. As anticipated, a number of risks arise from the presence of an unregistered colony. The primary risk is that the presence of the facilities and personnel proposed for Project Daedalus may provoke acts of sabotage or violence by the local population (Security Risk). A secondary risk is that of becoming entangled in a ongoing conflict between Idic elements and an Amarrian proselytising mission both present in local society (Reputational Risk). While our standard health and safety policies could be adapted to manage the Security Risk effectively, mitigating the Reputational Risk is likely to be more challenging.

Following our initial remote contact with the colony, a ground team has been able to negotiate limited physical access and gather further information. The inhabitants of the colony have named it Pelsiddhakyl (Striving for Perfection). The majority of the population are followers of an Idic community called the Ulsiddhakyam (Perfectors) which grew out of the Rohaani sect. In contrast to the Rohaani focus on extreme asceticism as a means of preparation for ascension, Ulsiddhakyam practice centers on perfecting oneself through the use of cerebral implant technology. Following an ideological clash with Idama Nirantar, the Ulsiddhakyam left Rohaanar in YC 39 to pursue an independent spiritual path but have retained significant elements of Rohaani practice including the saunp dena ceremony of ritual suicide.

U4-Q2V III was chosen as a location for the new settlement because its cold climate requires a relatively ascetic lifestyle and the Intaki Syndicate was expected to be less likely than the Federal Goverment to interfere with the colony’s spiritual practices. Initial funding (and the colony’s name) was provided by the Pelsiddhakyl Monastery in Intaki’s Akat mountains, with whom the leaders of the Ulsiddhakyam had close relations. The early decades of the colony’s life were hard and money from the Monastery eventually dried up so, when offered financial and technical support by the Ishuk-Raata Enforcement Directive (I-RED) in YC 115, the colonists jumped at the chance to become part of a development programme called Project Dustbowl with the designation SD-9472.

A search of public records reveal the following press release by I-RED. Colony SD-9472 is not specifically described but we understand that it is referred to as the colony which continued development funded by a third party after I-RED’s support was withdrawn when it “failed to meet 100% P2 completion within scheduled deadlines”. So far, we have not been able to identify this third party and the Ulsiddhakyam remain notably stubborn about maintaining its anonymity while insisting that it is not their original monastic sponsor. In the context of this outstanding question, it is worth noting that although the local economy is largely agricultural, the Ulsiddhakyam have somehow managed to develop a sophisticated cerebral implant manufacturing plant (shown above). They attribute this to a combination of intellectual property licenced to them by the Pelsiddhakyl Monastery (which is famous for its rebirth equipment) and Ishukone (the creator of Transcranial Microcontrollers) but it may be that the unidentified third party had a hand in helping to fuse these two technologies.

As noted in the Project Dustbowl press release, the programme colonies were all encouraged to accept proselytising missions from the Empire. In the case of Pelsiddhakyl, the mission is from The Penitent Order of St. Charduzir of Assimia Reclaimed, which we understand to be an ancient but obscure and poorly funded organisation that focuses on particularly isolated and thankless congregations. Originally, the Charduzite mission comprised a priest, three acolytes and a handful of lay brethren but now just the priest and two lay brethren survive. The Ulsiddhakyam attribute this death toll to the rigours of life in Pelsiddhakyl’s harsh conditions and lack of support from the mission’s Mother House after the colony was removed from Project Dustbowl. The priest, Brother Shohaib, confirms that adapting to the climate has been a struggle and they have lost contact with their superiors but insists that at least three of the most recent deaths involved accidents while travelling to and from the Mission House (shown below) in circumstances that he regards as suspicious.

This allegation reflects a general hardening of relations between the Ulsiddhakyam and the Charduzites which coincides with the reported discovery in late YC 120 of the lost Idama en Waro in captivity in the Kingdom and the terror attacks launched by the Tears of Reschard in mid YC 121.

An already tense situation appears to have been exacerbated recently by the opening of a new and much more aggressive mission on another Dustbowl colony. Brother Shohaib claims that he and his remaining two brethren have been forcibly fitted with medical monitoring implants and told to prepare themselves for an ‘assisted’ saunp dena ceremony should their health fail. While the prospect of having his subconscious imprinted onto a new born Intaki leaves Father Shohaib in fear for his immortal soul, the Ulsiddhakyam argue that it is simply equivalent to the Father’s own proselytising. Regardless of the spiritual consequences, it is a situation that will require delicate handling as it seems likely to escalate local tensions and may provoke a forceful response from Amarrian-aligned interests in the region, all of which could interfere unhelpfully with the timeline or even the final success of our project.