First, as a player in Amarr militia, I’d like to say that faction warfare is tremendous fun. The small skirmishes over plexes, hour long plexing sessions with friends, trying to get systems vulnerable, and the big hub bashes when the militia comes together to take these systems.

But for the past few weeks, we haven’t been doing any of this. We’ve been on a grueling defensive war that we are bound to lose, sooner or later. Is it against the Tribal Liberation Force? The Federal Defense Union? No. It is against 600k ISK Atrons that have started flooding every single militia in untold droves. Bots.

We have done everything we can to undo the damage they are doing on the warzone. Players patrolling the warzone for as long as they can in specially fit ships, killing hundreds of their atrons. Dplexing the systems they’ve driven to vulnerable for hours on end, without breaks or a moments respite. Recruiting new members to help us fight this menace. But they just reship, and continue plexing, 24/7, somewhere you’re not.

At the present moment, we have 5 of our systems go vulnerable every day, but even TLF has stopped showing up to bash them. Another 5 are perpetually above 90%. One third of the warzone is more than 50% contested at all times. And it just keeps creeping up, no matter what we do.

And it will continue being demoralizing every second these bots are online. We don’t mind fighting a losing war against other people. Or grueling fights of attrition to take or defend a heavily contested system. But this, if it goes on, will drive every remaining player out of faction warfare. Because there is no point to it. None.

Why dplex systems? So that some guy can make a few more bucks off his RMT farm? Why take systems? So you can watch as they inevitably inch back to vulnerable? Why recruit people? So that somebody can launch another instance of his script?

No, we must embrace the new future of faction warfare. An atron in every novice, and a venture in every large. Every system gently oscillating between 99.3% and vulnerable. To simplify maintenance, the Infrastructure Hub can go the way of the Captains Quarters, since nobody will be using them. Due to the sheer numbers of alpha accounts required, this will greatly increase both engagement and player statistics, as well as lower the price of faction modules. Everybody benefits.

Please CCP, you’re our only hope.

I feel your pain and frustration. The bots across Eve need prioritising and nuking once and for all before they loose their player base for good

Faction warfare has needed changes for some time, i think ccp have even said as much, don’t quote me on that. A quick google search shows many threads on topics similar to this, on how pvp isn’t rewarded enough, how missions are broken within the war zone and so on.

With these bots around we now can’t even fight back, pvp wasn’t rewarded well but we got loot and we had fun, it didn’t matter so much. sure missions were broken and open to abuse but we could run them to for a few days until we got bored of them and make a nice pile of isk for our troubles. now with these bots we can’t, we can’t just do the same because it is banned and because what fun is that anyway. my first character doesn’t get to fight much anymore and when they do its a bot atron that doesn’t shoot back and doesn’t drop any good loot, sure it goes on the killboard but that isn’t a fun kill, its not a profitable kill, its just pest control. This account was never intended to do much but here i am multi boxing it as the only way i can fight back, one character deplexing whilst another gets hold of ships and tries to kill some bots to hold the line.

I’m with CiXiang on the sentiment of closing comments, we can and have been reporting them to you but we cannot swing ban hammers, we can only kill the ship report and wait until it comes back as we desperately try to defend our war zone.

the bot bash during gm week was fun, capitals are nice juicy targets, not sure it would be as good with a swarm of atrons though, maybe make an event of the big ones and just ban the small fry without spectical

Exactly how does a venture do a large?

I tried a venture myself and the best I can do alone is a small.

When defensive plexing you don’t have to shoot the rat.

deplexing my dear sugar smacks deplexing, to deplex you need to do nothing more than sit and wait, you can stick a venture in a large to run the timer and it works just fine, oplexing a large is much harder, need a cruiser or high dps destroyer such as a blaster cat or a polarised fit. thats why the bots oplex novices, super easy to automate and very low cot ships so they can turn a proffit even with us blowing them up as fast as we can.

the dystopian situation imagined here is that the botters will have automated characters in each militia that oplex the novices to farm lp then deplex systems back down gathering the lp from doing so whilst allowing the oplexers to keep on plexing. It is about the dullest game play imaginable to do this with no combat but bots don’t care as long as the lp is flowing

Hunting these bots is like ratting, except there is only 1 rat, you get nothing for it, and it warps away the moment you enter the site. In short, engaging content.

not true, i killed one and it dropped 100k of loot, in short about as good as highsec belt rats. except you get multiple belt rats in a group

well not me, my pvp character 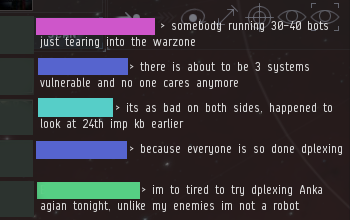 and to think, vundrable used to mean a response fleet would be dispatched to deplex it down and pvp people that came close, a contested system had dreads and carriers dropped, battleships were brought out to bash and also to kill the other sides forces.

that was fun, a bash was an event, i still remember a long bash we did where we hunted a naga that was expertly harassing our bashing efforts at long range. now there may be someone there deplexing, i think there is 1 fleet out but with no interest in pvp, that rare, once every few weeks event is no more. I know there were more than that but being near, being aware of it and it happening at the right time limit that. I miss a good blood-bash (see what i did there?) 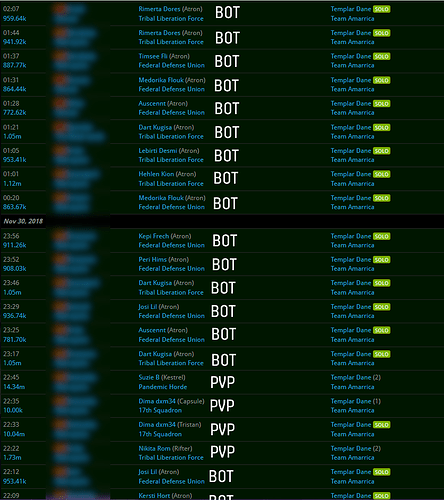 Totally agree CiXiang this needs to change as it has become pointless! This is just a swarm of Atrons! I have reported these for weeks and not one has been banned? Some hacking function in the plexs that only a human could resolve??

hack it to start? could be done, would certainly mix things up if you needed a data analyser with you.

Just give the coercer one more mid first

Yeah maybe not a data analyzer as it would put pirates at an advantage against militia(loosing a mid slot) but maybe every 2 mins you need to hack it, means during that time you are a little bit vulnerable and it would get rid of the bots.

Needing a data analyser would really suck. A item for hacking would be a better solution honestly.
Anyhow, this botting issue really needs CCPs attention.

definitely, as i said earlier, we can kill them, we can report them we can deplex to hold the lines but we cannot swing ban hammers

The issue isnt only the bots, its CCPs total disregard for Factional Warfare, even when blatant mass cheating is going on and being reported?? Its a joke to be honest. A lot of good players on both sides of the warzone give their time to engage and create good content and are used to request for fixes being ignored. But this is something that cannot be ignored and if it is, then no shits are truly given.

So I did the rough math on it since I wanted to find out how much these botters benefit, works out to about 23k USD/month.