"hisec players are too apathetic and disorganized" - thoughts

I just clipped this from a locked post because I think it forms a fundamental challenge that CCP is having with keeping their audience(s!!) engaged: They have allowed a pretty severe case of both cultural and political dichotomy to arise without redress (as have most MMO offerings):

What research is available (academic as well as industry) clearly supports the assertion that the market is looking for well-integrated PvX content. I wish I could link you these, but I’d lose my own access… sorry. (CCP - you know the stuff I’m referring to, I’m sure.)

The problem is, the genre has never recovered from the segregation of PvE/PvP in the MMO, let alone designed a game that can grant both segments the content they most desire without necessarily depriving the other.

Repeatedly, games incorporate mechanics without any attention to the necessity of binding social contracts. They rely on the players to bring and maintain such things. Only one problem with it: The players never manage it as the advantage of predation swiftly corrupts and erodes interest.

Oh, and because PvX players are too lazy and disorganized to play both sides of the PvP fence (i.e., protect the prey, make them your supply chain, fight your PvX competitors for control of the materials).

But why should they, when it’s cheaper, faster, and ‘fun-er’ to prey on them?

Solve for that and you ‘fix’ EvE for today’s market.

You don’t need to change the base game. You just need to give PvX players a viable and lucrative reason to protect as well to destroy.

Let them move between modes, hell, require it. And pay them nicely because you have to make up for the opportunity cost.

But if you design for PvX and make defending supply chain just as important as pirating it? 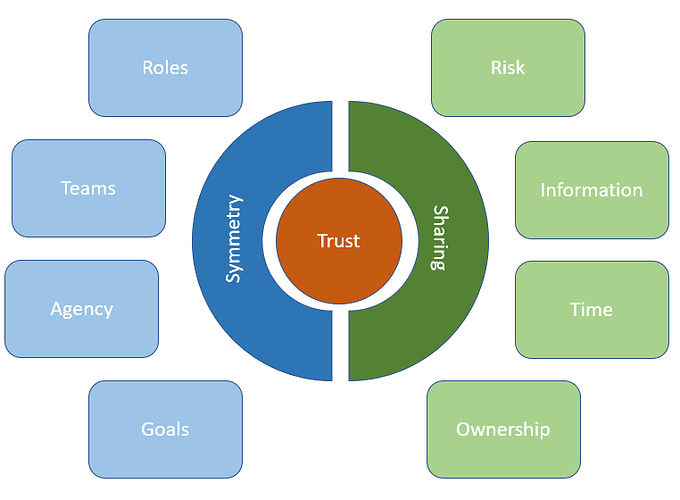 Today I want to share with you a design framework that I’ve been working on for a couple of years now with a team at Google’s Advanced Technology and Projects (ATAP) group, led by Aaron Camma…

I don’t get the point. The whole idea of mentally separating PvE and PvP players, and highsec other sec has to go, is it what you want to say? Then I agree. There are playstyles, and different security areas, they map n:1 to a single player. Each playstyle/sec area combination needs to be treated equally with content, but avoid assuming people are exclusively doing only one combination, or pushing for an artificial progression.

CCP fails on most of these points unfortunately. It segregates players in instances and arenas, it assumes a progression from high->low->null, it doesn’t care about existing playstyles and if changes remove them.

There are plenty of HighSec players who never engage in any of the other areas or participate in PvP. I don’t know any lowsec or nullsec PvPers who don’t do at least some krabbing or PvE play.

So they never undock? But even market is PvP. I would say that only appearing in local is also PvP because it will affect someone else.

They don’t actively go out and try to shoot people in space PvP. You can be pendatic about the definition of PvP, but the statement stands - there are a lot of highsec players whose only experience of PvP is being a target. They spend most of their time in PvE activities.

This isn’t the case with the average lowsec or nullsec player, who is doing PvP in space and then hopping on a krab alt in highsec or running abyssals to make isk.

The whole idea of mentally separating PvE and PvP players, and highsec other sec has to go, is it what you want to say? Then I agree.

Almost. The one thing that PvP players consistently complain of is the one thing that they are best equipped to solve - lack of prey. Rather than attempting (and repeatedly failing) to “make” PvE players engage with PvP, and rather than leaving them open targets (erosion), equip the PvP players to operate on both side of the proverbial fence; defending or attacking.

That’s how you get to PvX because that’s how it used to be before they separated them. And it worked. And it still works.

Which is why I bothered mentioning it.

I suppose I could also point out this is the natural vault point for an actual eSports venue… those with their thinking caps on should be able to suss the potential therein.

And your point is? I don’t know if you are complaining or trying to make some argument?

Because I believe in offering suggestions, a small and ad hoc outline, “What might an EvE eSports campaign look like?”

I would not begin to dream of what prizes should be, but they should be in accord with what you see in the larger eSports arena (e.g., veblen goods, unique, personalized).

Your possibilities from here? Diverse. Manifold.

While i appreciate suggestions…….

Every molecule forming my being is screaming NOOOOOOOOO in unison.

And your point is? I don’t know if you are complaining or trying to make some argument?

I was just adding to OP’s conversation on the subject.

Change is a thing. Things that do not change, die. I have attempted to offer a suggestion that both “solves” the PvE plaint, provides the PvP player much more diverse opportunities for play and access to their preferred playstyle, while simultaneously providing a valid and likely lucrative way to both fund and support an ongoing ‘retrofitting’ of the game.

My apologies, but without significant understanding of your objection, I cannot hope to overcome it with logic, and I won’t be spending my time here playing the ‘drama lama’ games I see so prevalently.

So that’s all I can say in reply.

Ok first of all. Not all change is good change. Change fore the sake of change can be bad.

And looking at your list all i can say is………. I play eve to have fun. I don’t want a second job. I want to play with the people i play with. I don’t want to be randomly put with people who are not in my corp/alliance to co-operate in some campaign when there goals may not align with mine. I don’t want to be constantly “competing” in tournaments that last 30 days or a year. I want to do things i want to do at my own pace. I certainly don’t want to sign up for some 30 day tournament and feel like i have to go and blap somebody to keep a points totally up when all i want to do is have a glass of wine and read a book while filling an orca.

It feels like you have basically taken the PVP campaign from the elder scrolls on line and applied it to EVE.

I believe you may be assuming this would be ‘required play’.

I’ve submitted several variants on this idea in the last days, and if you review them, I think you’ll find that nowhere within them is a raging desire to “make” you play any of them.

I’m mostly saying that, IF PvP centric folks are serious about wanting more (and better qualified) ‘prey’, they shouldn’t have any issue with these suggestions.

And all PvX players should adore them. But you can never tell these days.

But the underlying data points (should any of them be implemented) will quickly reveal if the actual motivations of our friends in low and null, j-space, et al are really on ‘quality pvp’ or merely ‘aggressive predation’.

If the former, problem solved. If the latter, well, they say acceptance is the first part of real change. (grin)

An eSports team would give HiSec what they need without impinging on your preferred play time choices.

An eSports team would give significant segments of LowSec, et al players what they crave without impinging upon the preferred play time choices of purely PvE players.

An eSports team would give CCP a viable revenue stream (between advertising revenue, sponsorship agreements, and likely, increased PvE numbers) which would benefit new players and veterans alike.

I believe you may be assuming this would be ‘required play

It would have to be otherwise nobody would do it. It sounds awful

Your opinion is noted. Thank you for contributing.

it’s important to understand why there is split between PvE players and PvX players. Biggest and most important cause is simply fact that you can’t really fund PvP with just PvP. Hence why PvP players are forced to be PvX just to do thing they enjoy.

On other hand PvE player don’t need to have PvP alt just to PvE, do activities they enjoy.

You want a great example of how disorganized and terrible highsec players are look back to the Triglavian Invasion chapter 3. When EDI and Kybernauts formed. Was a total mess and many FCs had extremely hard times getting all the highsec carebears to conform to certain “standards.” When it came to lowsec systems hardly any HS players joined in on grinding those systems.

Now, not all HS players are pve carebears there are some out there who are willing/want to learn, just the majority want to pve and nothing else (which is fine)

I understand the history of the play mode separation quite well and I understand your perspective. It remains that the missing link for PVX is to give PvP players a reason to play both sides to meet their own appetite. That’s what makes the community ‘see’ the benefits of bridging the gap instead of camping it. (grin)

This is always a completely self-inflicted problem.

This is always a completely self-inflicted problem

If it is actually a problem. Which I think is debatable

When I read eSports and EvE … well, then I switch into “heavy oppose mode”. Those two won’t work together outside occasional dedicated tournaments. Any funneling or guiding players into specific activities is bad design for a sandbox game, and must be avoided at all cost. The PvP/PvE ecosystem in EvE works quite well, if only all activities would be attractive and within the open sandbox. EvE was better here in the past and got derailed with instances and arenas.