In systems with a security level below 0, online players should not be counted on the "local" channel

On systems with a security level below 0, the “local” channel should not count online players

2 Systems with a security level below 0 become boring
Players with a security level below 0 usually have 3 choices: 1. Production 2. Participate in medium-to-large conflicts between alliances 3. Single or team to go to the hostile system to destroy production
“Local” channel counts online players Causes all leagues to have their own “Alert” channel, making the third option very difficult
Difficulty means less participation and less fun

CCP tried it. It wasn’t healthy for their bank balance unfortunately.

Wormholes provide this level of stealth and limited intelligence. However it isn’t going to happen again in null.

Best time I had in null was the black out, but no surprise people cried. 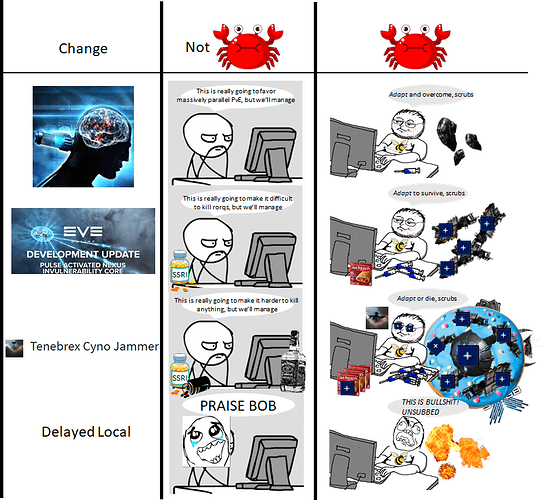 Would it be possible for black out in very low security systems ie bellow -0.7 for examlpe. Putting good earning pve sites in there with no local. Mabe have low sec ore in these systems too. Just an idea hmm …

Would it be possible for black out in very low security systems ie bellow -0.7

I think the best way would be to implement it together with the original envisioning of observatory arrays. That was essentially going to be a turn off local, but allow it to be selectively brought through anchorable structures.

Something that could provide intel, but also be destroyed would have made sov warfare and gameplay richer, unfortunately CCP didn’t seem capable of following through on their original vision.

Stop whit this already you hipocrits.

Fitst of all it were already done and it became masive dizaster.

In first days all null players were angry

After some time third of people stopped plaing and start using wh strategies.

Litetary few days after so called pvp players who wanted this change start crying like children that null is empty and people farm onli in masive bloob umbrela.

This become worse and worse so it were rolled back.

Anybody who want no local in null is an hypocryte you dont realy want wh space system all you want to shoot people who dont understand the system and cant shoot back cause you suck in pvp you suck in locating targers in wh. So you want kills on silver platter.

Sory but people are not stupid if you make null into wh people start using wh taktic like all rating in single system locked down gates and masive responce fleets.

And then you will cry like babies you are.

There is already a space whit out local whit big population its called wh space.

So go there and learn pvp. There is no reason for ccp to extending wh space cause it wont make you suck in pvp less.

LOL get gud yeah cool with your 6 Kills and 6 losses. what did you gank 6 ventures

But in all seriousness null is bloody empty cos the sites are so poor no 1 bothers ratting. i live in null and mining is the only half decent income (multiboxing) but iv went ess robbing loads of times and finding a bank worth robbing thats not 1dq or mj- is not easy.
At least get rid of BRM… The ESS is great i love that feature (wish the banks were bigger tho) fighting for 49mil is pretty ■■■■

if black out came to null with out any other changes i would expect lots off people to be pissed off.
huge increase in risk with no increase in reward. if ccp changed the reward to reflect the risk that mite change some of the peoples minds (not all ofc).
Say a blackout system in a region with a ESS bank that pays out every 4 hours or so, then have sites that pay poch style payouts strait to the bank. that would encourage thief’s to try rob your hard earned isk from the bank.
if robbing the bank you lost half the isk that may deter corps robbing there own banks. but still a tidy sum for some other group willing to rob it. im talking 4-5 bil banks something worth putting a small fleet in to rob it

Nice idea. I’m currently a HS / LS cowboy. That said, blacking out IMO is just that, people running around in a dark room. This is supposed to be science fiction where technology gathers intel.

Theyre enough “no local” in the game and its basically dead dead long time ago. Even for ratting, only a few multiboxer doing content in “no local”, so disgusting for 2604 WH, its need a big rework.

There are 3524 nullsec systems, 230 of which are not connected to the rest of the cluster.

What about lower than -0.7 gets no local.
But has good mining and rat sites to make the reward worth the risk.
Null as it stands is crap. Isk is crap fights are crap.
We have pretend wars… there crap too.
Its mostly we will set you neutral but dont shoot our stations, just shoot the odd miner.

Asset saftey is another thing thats crap.
Blow up stuff you get the loot.

No asset safety would mean that a big block group cant stash titans in there home systems on mass. Because if their keepstar gets blown up by another block there stuff would all drop for the winner to sccop
The horders would have to come out and fight to defend there stuff or lose it!

Then we will see good fights that cause major salt!!
Haha i scooped ur super yay cya

What about lower than -0.7 gets no local.
But has good mining and rat sites to make the reward worth the risk.

Asset saftey is another thing thats crap.
Blow up stuff you get the loot.

That does not.
Citadels were intended to replace outposts. Outposts did not drop loot. Even if you went AFK for a year and came back to some other alliance owning it, you still had your stuff. You could firesale it or find some way to sneak it out. You did not come back to all your assets sucked out into the vacuum of space for some mouth breather to hoover up. I am of the opinion that turning off asset safety in abandoned structures was stupid too.

No asset safety would mean that a big block group cant stash titans in there home systems on mass.

No, it means they would ■■■■■■■ stash all the titans so they can defend that keepstar so it doesn’t get up. Of course, if you’re a smaller alliance, I guess you just have to leave sov null since you just got turned into a loot pinata.

1 reason for axing assest saftey is it gets isk out the game as the loot fairy takes a share of the drops.
But as for stashing titans i dont agree. Say ph or goons for instance. If they only have 50 titan pilots why would they keep 250 spares as if the station gets blown up thena good amount will b lost and the others stolen by the winner in the spoils of war.

No Asset safety in wormholes is great. Evictions cause fights that really mean something. Not pretend wars that we have right now which are less exciting than watching paint dry.

I approve of this message.

We had blackout and the only thing that achieved were nullsec players quitting and crying on forum how it is wrong and should be reverted. And they managed to get it reverted as they cried really loud.

So I doubt this will get “life” into the game. As I wrote in other thread, there are only two things that would increase player count.

Nothing else, as much as we all want to believe that our suggestion will bring many players back, won’t increase player count to any visible extent. (Most suggestions over the forum would in fact decrease the player count (in the end).)

Black out was a mistake. 1 because there was no extra rewards to null for the extra risk.
But ccp does need to do something quick not necessarily re introuce black out but something