My Opinions after 1 month playing

Or just… don’t bother with it nor aim for it. Going omega isn’t a goal for an actual newbie. Finding entertainment is.

that is my point xD not worth it at that point.

That isn’t really true. You can stop worry about ISK when you have some reserve. And that reserve needs to be quit high. For example, I lost 100 milions trying tier0 abyssal sites on Alpha Clone. That is a ton of money for new player. Not to mention that each time you lose you must go buy new ship from scratch.

I also believe that these ISK/hours rates are nonsense. I used to be like that too when I tried this game the very first time. I was just mining, mining, mining counting ISK/hour and how much hour is gonna take to to get PLEX so I don’t have to pay real money each month to play. But thats ■■■■■■■■, in the end you grind and farm so you can grind and farm next month. This is another reason why I choosed not to activate omega despite I have plex from previous years. I want freedom.

You might argument that 20€ isn’t that much to play especially with the year deal, but to me it is considering what the game offers. To me personally, there isn’t anything that good to deserve this price especially if they are additionally monetizing everything, MTC, skill extractors, daily alpha injectors, skins, apparel and now even expert systems clear p2w mechanic. To me it is either, or not both. Sorry, but EVE is just disgusting cash grab. I rather spend me money for extra stashes in PoE or new cool skins in LoL than here. Plus I come from middle europe where this mindset is shared, to most of ppls in my country, the price is really high and hence nearly all players wants to PLEX their account with ingame money. For which they then grind and farm almost whole month so they can do it again. Thats just ■■■■■■ up imo.

//btw if you ask me what the game offers that I stay and still play it, it is nostalgia monstly and peoples, I was brought back with friend who used to play with me saying he started again if I don’t want to join him, and while that didn’t work as we both had different goals, what keeps me here is this player driven content specifically ganking and just chatting with ppls in local or email (since I failed to recruit any players into my corp).

Which is MY point. The only people who, right off the bat, are looking to grind for omega are alts (exceptions exist). The whole concept of “if my industry account doesn’t make enough to pay for omega then why even bother” is the mindset of someone optimising the fun out of the game.

Normal people, so not eve carebears, want to do stuff because it’s a game: they want to have some fun and be entertained. The VAST majority of actual newbies don’t install this for the first time to go “lets start a second job”, only already invested players do that. So your mind set or what you value is completely irrelevant for a newbie and if you spoonfeed them that stuff you’re a) not actually helping them and b) will probably make them miserable.

The advice on gas mining is spot on. Jumped on Eve the other day after being away for several months and immediately scanned down an empty shattered WH that had at least 6 good gas sites. It was next to HS, which is by nature dangerous, but a lot of hunters will just jump around to the ice and ore sites looking for EZ kills.

Which brings me to my Eve-weirdness–my favorite activity is escaping from hunters. I’ll huff gas or crack sites or whatever and keep an eye on dscan. Love thumbing my nose when I warp away. If I die, props to the hunter. Part of the game…just say “gf” and grab another ship.

By the time a true noobie masters the yada of lowsec enough to make a living in lowsec, he’d be needing 10 times what lowsec can provide. Given his commitment and time invested being similar to what OP states.

I like seeing posts like this, a perspective from a beginner… I agree on the skills comments… and what has been found in training/gain ratio.

It happens to us all… a time comes when one finds those SP could have been invested in the gamin’ style we decided afterwards… a thing of the past with injectors and whatever but… nice to see it still goes on.

Too bad peeps who can’t enjoy with pennies, want to bet quarters. What I mean is, yes, we all want los riches and super pew! and can’t see any joy in a humble phriggot (frigate). I try very hard to focus on the tasks and items at hand as motivators instead of regions and space class. The environment is difficult to embark as it’s allure requires a stereotype. So, I try to see it from my current abilities’ point of view. I know it’s not quite clear but it’s kinda what I’d suggest for new players here and there.

Which is MY point. The only people who, right off the bat, are looking to grind for omega are alts (exceptions exist). The whole concept of “if my industry account doesn’t make enough to pay for omega then why even bother” is the mindset of someone optimising the fun out of the game.

Normal people, so not eve carebears, want to do stuff because it’s a game: they want to have some fun and be entertained. The VAST majority of actual newbies don’t install this for the first time to go “lets start a second job”

Ever seen NORSEMEN, the series?.. there’s this slave…
And peeps can’t digest he’s happy as a slave! It just kills them that he can humble the humblest just by knowing his place.

Too bad is a NTFLX series, so… it’s not complete… but it’s fun to me.

Lol not even close. ES is your idea of renting ships and skills etc. 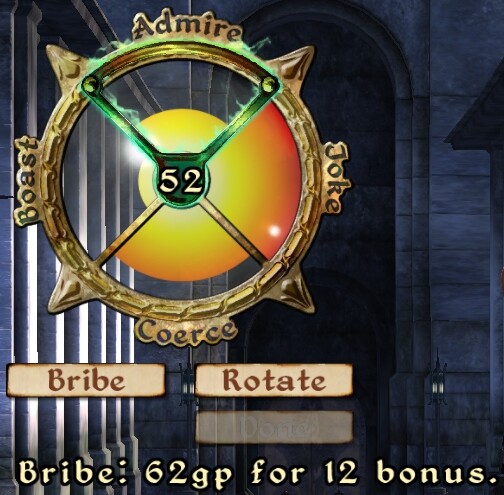 The art of persuasion in The Elder Scrolls IV: Oblivion is illustrated by a mini game featuring a wheel with options to select, rotate, or bribe. The Speechcraft skill affects the result of actions where you select a 'pie slice' and the cost of the...

Pretty good description of EVE - I would however argue that you can make good ISK with exploration (subject to RNG of course), especially if you play in a time where there is low amount of players, less people to hunt you

Exactly. It seems to me that many people forget this is GAME after all…

By the time a true noobie masters the yada of lowsec enough to make a living in lowsec, he’d be needing 10 times what lowsec can provide. Given his commitment and time invested being similar to what OP states.

Huh Low sec is the best place in eve it provides plenty.

Waiting for the usual toxic youre wrong, we are right, we dont agree with… oh wait

Thats the beauty of eve, everyone has a different experience, so thanks for sharing yours. (just next time better formatting please :)) … Keep going and exploring! I would suggest joining a corp at some point, but learn the game in your own time at your pace first.
fly safe

So then why does my character have to spend weeks and months to operate basic ship functions?

Training a pilot for everything is where you might find the task becoming very daunting so taking the approach of setting short goals for each pilot you plan to create and train better use of the month to fill in with your future plans in New Eden.

My guess on this would be;
PVE mission pilot would best train shields, missiles, rigging and drones followed by navigation, targeting then social etc with focus on max mid slot ships.

Take a moment to read through the thread. [Magic 14 Nonsense]

Simply put, the skill system is designed to take as much time as possible in an effort to make us pay for subscriptions longer. It’s a pay and time gate to any activity in eve

Well, that’s one way of looking at it…but on a deeper level it’s about creating imbalance. The very thing that makes the game interesting is that you don’t know what skills any opponent has. The imbalance is precisely why a frigate can take on a cruiser and win.

I agree that for noobs it can seem that skills take an insufferably long time. But even 9 months into the game ( in my case ) its really not that different. I have an amazing Tornado fitting that is forever a month away as other more immediately urgent skills get moved to the top. I have a 1200 DPS Praxis fitting where I have no option but to wait the 23 days for some Level V skill. I have 450m ISK ships that have less DPS than some of my 60m ISK ships.

It’s a mess…made all the more so by initially spending several months training up mining skills before moving on to PvP. So despite being 9 months old my ‘combat’ skills are really only 4 or 5 months old. And joining a corp with doctrine ships different to the Gallente ships I had trained for throws the skills queue off even more.

But on a deeper level this is precisely what makes the game so variable and interesting. I’m not just some clone churned out with identical skills and ships to everyone else. For better or for worse, I am unique…with a unique skills history and experience. The mess is all finally coming together, and there is a sense of advancing despite all the delays. Having the patience to actually wait that long…well I can see that’s not something every noob has, but it is in integral part of the game and a great feeling when one does finally start to ‘get there’.

Indeed, I was referring to the progression-reward curve. By that time, it is no longer a “new player”.

There are no true noobies “making a living” out of lowsec.

There are no true noobies “making a living” out of lowsec.

Yet when I kill AFK huffing ventures in lowsec experience shows there’s a very high chance I’ll get a direct Convo invite some minutes later and the first question will be “why”?

I answer by inventing* a very big scary Boogeyman. “Rich people are paying me to save the gas for them” or “I’m just following alliance orders for The War” and other things. Those are handled really well. Because they can be the underdog hero.

Whenever I reply “Cause I can” or “because it’s fun” I receive moral chastizing of my obviously evil innate character.

*There’s one that’s not invented, there was an extremely egomaniacal venture I encountered. Like, off their rocker god complex. Forget their name, but I was told “kill him as much as possible”.

You know it’s true there is absolutely zero reason for you to shoot them defenseless miners in a space ships PvP pew pew game and no they didn’t mess up going into an open PvP warzone and not paying attention nor doing their best to survive, nope it is you who behave in an unexpected way shooting them for no reason.

Now kneel in the corner and feel ashamed.

“Rich people are paying me to save the gas for them”

This one is the best.