My Opinions after 1 month playing

Am I a freeloader for commenting that some people hand isk to new players? My bad, I thought I was just remarking about some generous and caring people. You’ve set me straight.

But I have one important question for you. With all you said and found out about this game, what are you still doing here?

The people I have met and spend time with every day are amazing. In my opinion, this game gets a bad wrap about the toxic community. as I said, nearly everyone I have encountered has been very nice and helpful, and generally good people. With any online video game, the community is the real sticking point.

Are they similar to true Scotsmen ?

It’s a mess…made all the more so by initially spending several months training up mining skills before moving on to PvP. So despite being 9 months old my ‘combat’ skills are really only 4 or 5 months old. And joining a corp with doctrine ships different to the Gallente ships I had trained for throws the skills queue off even more.

i have 10 years + of EVE and i fly amarr ships only
why would i fly anything but the BEST?
if someone tell me i have to train for other ships i say NO
if they take it personal i don’t care
im not wasting my time fighting with wrong people

You better have a copy of

Written by Heideran VII, the Amarr Emperor himself, Pax Amarria is the most remarkable book published in the last century. In it the Emperor writes about his hopes and dreams for peace throughout the galaxy; a vision that has propelled him into...

in the cargo hold of every single ship you fly.

Pax amarria is for heretics, weaklings and traitors.

Prefer a lil duct tape and rust, always makes me feel at home.

I generally love Amarr ships, I love my Apocalypse, but for smaller ships…the Dragoon has to be the most useless ship I have come across. No other ship in my entire inventory ( and I have a lot of ships ) runs out of capacitor with 3 slots still left to fill, or has such low DPS for a destroyer. OK so it has energy nosferatu bonus ( 5% I think ) but that really doesn’t make up for it lacking in every other respect.

Its a drone carrier though, Im not sure being in NOS range is its intent.

Its a drone carrier though

Even among drone carriers ( which I generally dont like, I prefer missiles, lasers ) I’d rather use a Vexor.

Most people generally would use a cruiser over a Destroyer, did you mean an Algos?

Id rather the Dragoon because it looks much better though.

Most people generally would use a cruiser over a Destroyer

If I’m going to rely primarily on drones I use a cruiser or above. For PvE for example I use primarily a Gnosis. I don’t see the point of turning up in a weaker ship. I have an Algos but rarely ever fly it. If I’m simply ratting in asteroid belts I’m quite happy with a Condor or a Slasher.

Between its salvage capability and missiles, I like the dragoon for longer duration sojourns the frigates cant do. Ofc for bigger fish or annoying players, Arbitrator is super duper.

I generally love Amarr ships, I love my Apocalypse, but for smaller ships…the Dragoon has to be the most useless ship I have come across. No other ship in my entire inventory ( and I have a lot of ships ) runs out of capacitor with 3 slots still left to fill, or has such low DPS for a destroyer. OK so it has energy nosferatu bonus ( 5% I think ) but that really doesn’t make up for it lacking in every other respect. 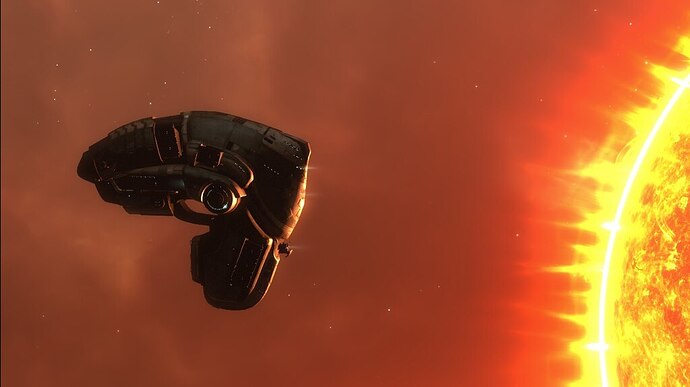 Hair dryers are the best man, too bad its a drone boat.
Looks like a phaser to me thou.

Its one of their least worst designs

Along with Hecate and Algos, but its still Galugly to me.

Naga looks amazing imo. Btw is the decals on ship’s flashing to anyone? its driving me crazy

the game is designed to turn new players into easy content for older players.once you come to grips with the fact that most of eves content isnt made for new players and that you have no chance alter your strategy.i only take junk ventures into low sec.i fit them with miner ones i make myself and nothing else.when theyre destroyed by petty griefers they get no loot.its the same with t1 cruisers i make.since they stand no chance in low sec i insure them to the max and use them to rat with cheap t1 drones i make myself.older players are going to destroy you no matter what equipment you have on a t1 cruiser so i prefer to leave them with nothing.since you spent nothing on fitting the cruiser the whole insurance pay out is profit.its a win win.the griefers get the easy kill they so desire and you get millions in insurance.altho its not quite as satisficing for the older players when they kill someone that knows struggling is pointless and doesnt try.heres a quote by w.c. fields"if at first you dont succeed try again then quit.no point in being a dam fool about things"