Probably won’t happen because incompetent people like @bbtop or @kristallnachte on reddit sperg about how this is better or more logical, while ignoring that it is anything but logical or better. You read chart rows from left to right and not from left to right (name) to right to left (damage boxes) to left to right (individual damage box state). It is completely illogical to put the first damage layer as far away from the continuous reading path element that comes directly before it. But what can you expect from people in Goons and Wingspam.

These people like Jackpkmn or kristallnachte even argue that the ship damage indicators go from right to left in the target locks. This justification is completely ludicrous. It has nothing to do with how you read text and data in a ROW as opposed to in a layered circle indicator like the target lock. The damage in the watchlist drained from right to left before as well but the important arrangement of the damage layers followed the same principle of the target lock items where it went from the first layer that you put your eyes on to the lowest, last layer. The new Watchlist and Drone damage boxes turn that around completely and thus make this completely illogical.

Koreans read from right to left…

Modern Korean reads from left to right and horizontally. https://askakorean.blogspot.com/2012/02/which-direction-is-korean-written.html

I just ran my 11 characters through the Skilling Spree and none of the chat windows were changed on any of them.

Possibly because I have them pinned. Maybe those who are having issues with the chat boxes should try pinning the windows into place after setting their size.

Please do not increase the Local chat window size, and remove the minimum size limitation, some of us need the screen space for other windows.

fyi peeps, we can now move the chat windows back the the size we had them before.

A small positive comment on the new damage icons for drones and in the watch list: The only redeeming value that was added to the new icons is the apparently more granular display of damaged steps.

Oh LoL… Two huge steps backwards, then small step ahead… Regarding those drone skill changes, I would say: no big point for omegas (just few hour training), and simply pointless, counting in drone skill limitation, what made Gallente / Amarr drone ships and BS ship class obsolete, for alphas… Even not worth to ment Gila / VNI nerfs…

in the Build that just went live on TQ, the Combat Interceptors are nerfed to their old stats (the stats before “Howling Interceptors”.
Why is that?
Are the changes Team Talos makes only temporary or are there specific reasons why this change is reverted?

Unless it is a mistake it is probably because it was a temporary measure to begin with. If CCP would not revert back changes in their 2 week balance bonanza approach, they would run out of things to change very quickly.

You messed up the interceptor buff. The per level bonus buffs from october have been removed!

Has also been reported already and you should post there.

Ah, I see.
Thanks for clearing that up, I’d hate to see some of the changes of them get reverted

The chat window is far chunkier now too. And you can’t make it smaller.

Known Issues: Audio: Environmental and materialization SFX for the Triglavian Stellar Accelerator is not linked to any of the Advanced Audio Settings The new warping SFX has one part which is not tied to any of the Advanced Audio Settings Aura’s voice is lower in other languages that are not English Balancing: Interceptor Trait balances (damage % buffs) reverted to previous balance numbers Graphics: Character selection background does not fade to black on the sides Missing animations for…

Has already been reported.

I don’t see anything about the selected item window refusing to keep the size you set it to. It always defaults back to the wide setting they implented this patch every time you’ve docked. 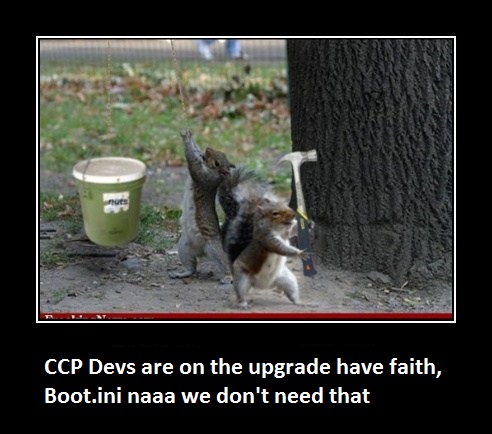 An Option to have the watch list and Drone Damage windows read from Left to Right as it has been for years would be Great, I can appreciate some people will prefer to be able to read it from right to left but to me it is all kinds of wrong,.

Thank you for fixing the chat window

Since there’s more chance of CCP reading this thread and they don’t seem to be inclined to respond without prompting… any chance we could get a clarification?

Question about this announcement: https://www.eveonline.com/article/q0tg1p/exploit-notification-sansha-incursion-sites It reads to me like you’re banning sponges. If so… why now after years and years? If that’s not what you’re banning, could you clarify that, please? Edit: removed definition of sponging, just in-case that is what they’re banning… (CCP feel free to PM me for the definition if you’re not aware (or just look at the edit history))

I know, but I don’t have a reddit account. Also, there’s a been a thread on the subject there for days as well. If they respond there, I’ll probably see it and will be happy to inform people here.