Gods and spirits Valate! You calling me a crap poster? We may have to settle this in a Diana Kim style honor duel with Rifters at 20 paces.

Besides, Arrendis and I look nothing alike.

Hmmm, I seem to recall defeating Nauplius quite easily and I’m a Minmatar.

In the stage, Wirashoda - Veles Clade Bioadaptation Chambers, there is a specific condition under which, a Kikimora has a chance to crash into the window of the station, cracking it.

HAHAHAHAH you see that, Rusty? Your infamous “LOL Autopilot Button” incident is forever memorialized in the game!

Not a thing that happened, no proof.

Sorry I’ve been away for a couple days but I was participating in business standard ‘Crunch’ for our NEXT COMMUNITY DLC PACK! 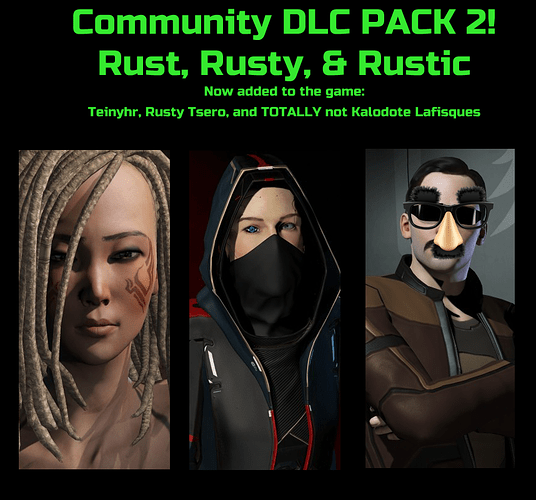 The added fighters of Tienyhr, Rusty Tsero, and TOTALLY Not Kalodote Lafisques are sure to add all sort of excitement to the game!

We anticipate your feedback on these new characters! We will continue to make overpriced crap fantastic additions to the game we all love!

I approve! (Best end up on the top of the tierlists though, hah.)

…I worry about the matchup against Sahara and Remilia, however…

Well, Ms. Tsero, those matchups will depend heavily on the stage you’re on. Your character is a bit of a meme, but can be strong under the right circumstances!

Your character utilizes a mechanic where what happens in the dynamic background can affect your performance. For example, in Wirashoda, when that Kikimora crashes into the window, Rusty gets a tremendous boost of power out of the determination to avenge her destroyery comrade. You avenge the fallen Kikimora’s honor by attempting to beat the ■■■■ out of whoever arbitrarily happens to be in front of you.

You can be quite strong on stages that you have an affinity for, but weak on ones that you don’t.

So while everyone interacts with background events to some small degree and has slight advantages on stages they’ve affinity towards, Rusty focuses very heavily on these mechanics.

As of right now, tier lists are all over the place. You can find some declaring every character broken and every character terrible. I’m sure Rusty will fit into that well and some will find success with her.

It occurs to me that its a good thing that I’m not a character in this hologame, as most assumptions would put it into the explicit category(even though I do have a fair bit of hand to hand experience in the non-sexual context, heh. Still have a regional title or two on my homeworld, in augmented and unaugmented classes)

Your character is a bit of a meme, but can be strong under the right circumstances!

I am late to the party, but better late than never. Having been out of the loop for a long while now, I decided to try the game out to “catch up” on how these folk have conducted themselves over the past several months.
I’m pleasantly surprised by how fun it is! Don’t have a definitive main, but I definitely like playing Remilia, Sahara, and Flavours. Oh, and when I feel like being despicable and timing people out, Nauplius provides a perfectly degenerate playstyle.
I’m happy to not be included as I have not been in the trenches, and none of the things I’ve done that would be worthy of being game moves are public. I hope to never make the cut.

I have not yet been provided with a promotional copy of this product.

So, I have no real opinion on the gameplay involved.

Quit being a cheapskate and pay for one.

Pro-tip: just walk to a game store on a station that knows you. They’ll give you a copy and then some to distribute to your XOs.

I would Like to know if Volume or Site Licencing is available for this Product, as it may be of Interest to the Kaztropolis Imperial University Gaming Technology Institute.

Yes! Super ■■■■posting Siblings! is likely one of the greatest pieces of educational software of our time! We would be remiss if we didn’t have a site licensing plan for universities!

Outstanding. A 1024 simultaneous users licence should be Sufficient.