SOOOOOO the new FW seems to be NOICE 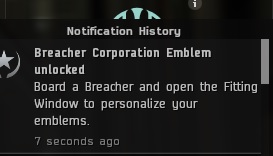 So If I were to ever join the FW with this Pilot would the logo Emblem come with the Pilot or would we need to buy again?

I disagree. Fights almost always come down to two ships approaching each other to 0, getting mutually tackled and immobilized, and then one’s tank outlasts the other’s and that’s how the winner is determined. In a very small fraction of cases, some manual piloting might be required, but its rare. Most of the “excitement” in EVE PvP comes from the risk of loss and/or anticipation of the loot that you’re going to get if you win, and not the actual fight itself.

Meanwhile, in an FPS game, it’s fun to actually shoot the guns.

Succesfully catching and holding a target is where it’s at in Eve pvp.

The fight itself, unless it’s a tight scramkiting furball, is a secondary passtime.

For me anyway, I chased and caught an Oracle through gates yesterday, the kill was just the cherry on top.

No. The logo would just change if you left corp.

Dual rep breacher best breacher. Really hard for new and intermediate players to fly, but an absolute heck of a good time.

I also use the dual web armor rage one.

Breacher is on god just what happens if someone makes a T1 version of the Hookbill, and no one can change my mind. However, my character is Caldari so I just make do with a Condor. The one that goes AB + Scram + Web + Web is just vicious against other T1 frigs since when you create range control like that, it also creates the optimal conditions for T2 rockets to apply their full damage. Not to say that rage rockets aren’t good with one web mind you. That is a common misconception.

Thank you, by the way, for that Tribal Education Force thing, it is really really amazing.

Thanks. It’s been a lot of work but spreading it out over a long period of time helped. Guess I have more work to do now that I need to update every guide to match the Uprising patch. So naturally I am gonna overhaul the fits index first.

In response to that picture you posted, which I have quoted above this sentence, just because you lose a fight does not mean that you can’t have fun with it. I tried out a new Punisher recently and casually tanked a Caracal, forcing him to bring in his friends to neut me off. Whenever I try something monstrously tanky like that, I always take a lot of joy out of seeing the horrified reactions of the test subject after the fight. They’re especially talkative when they win.

Just like null-sec, FW primarily consists of players who are there solely for the purpose of grinding ISK from PvE. The PvP component is minor by comparison, consisting of a select few players who subscribe to the “Battlegrounds” archetype of PvP because that’s what they’re accustomed to from other games.

Allow me to dispel this supposition. The frontline system will do away with backline capping for profit. People are going to have to actually do something for their LP now. Even if their motivation might be profit, the fact that they are now forced to participate in combat like normal people, instead of dumping an unfitted Tristan with 5 T1 hobgoblins into a novice and going AFK, is already a massive step forwards. Especially since this means that they are going to have to interact with the normal population of the militia, who are there to fight.

IDK, he was on grid and seems nice.

i mean i NEVER EVER got shot by amarr militia

blue is only a color etc

No, it is not. Awoxers exist to be purged. I did blow up a Calmil dude one time, but in my defence he landed at the drop-off site for Moissanite in a Venture and I wasn’t about to let him give the Fed minerals. All of the other incidents were basically people opening fire on me and then discovering why that was a bad decision.

i mean even the minmatar have Ushra’Khan that by matters of RP i never admit but is in fact a nice Organization, i talk to the mimies all the time they are cool

Having been in UK on another character, I can confirm that they have a policy to ban anyone who awoxes. This policy also drove me up the ■■■■■■■ wall because all the no-name nobodies from nullsec we were blue to for reasons beyond my comprehension would show up in lowsec, warp their shitty Enyo fits into plexes our standing fleet was in, awox the Minmil players in my fleet, then flip me the bird like 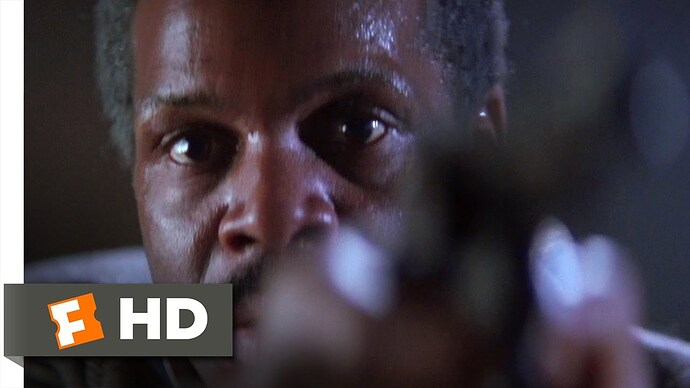 ✂️ When your nullsec blues slide into your FW standing fleet

I reported it up the chain and basically got told to deal with it. So the next time they tried that ■■■■ I did. The Sam Jackson way. 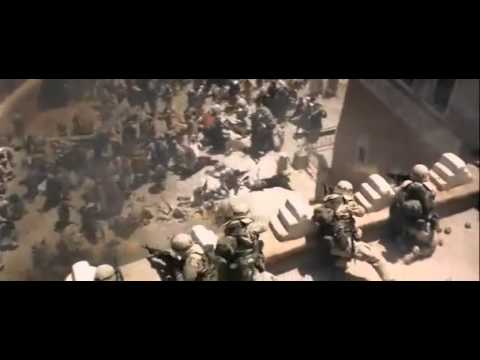 There’s a difference between actual awoxing (shooting blues) and encouraging people to go out there and pick fights. The problem is many people dont see the difference.

That is what is known as an intelligence issue.

As long as they understand that this puts them in the same area as those of us who see FW combat as an art that needs to be perfected and exercised regularly that is not necessarily a problem. I don’t care whether they are motivated by greed or a desire for combat, as long as the fight is good.

But for many other militia people they want a cookie cutter experience without having to put thought into it, press lever receive rewards like The Skinner box

You may pity them, as long as this does not affect your actions on the grid.

Yeah no dual rep fit can tank the destroyers, but that isn’t really the point. Any dual rep breacher will get dunked by a destroyer at is optimal range. I lose dual web dual rep Merlins to pulse Tormentors because I cannot rep hard enough (even permarunning heated with Hardshell I).

Repping them isn’t the optimal tactic. It is getting under their guns. This is something I have been doing in the Condor for a very long time, and the Breacher is perfectly capable of doing the same thing. Hence why one of the Breacher fits I linked was Evasion-Tanked.

Allow me to dispel this supposition. The frontline system will…

Repping them isn’t the optimal tactic. It is getting under their guns.

I know, that’s why I responded to the T Elliot guy about tanking the destroyers.

i notice that a lot of systems that had fights are empty or full of neutrals doing god ■■■■ knows what
the hole frontline idea appear to be backfiring
we have fleets farming them and ■■■■ in other systems
i used to make a biiiig route passing on lots of systems in the warzone , picking fights here and there , f you let systems be unimportant carebears will come , I’m kinda sad

more in the future but today was BAAAADD

EVE Online Faction Warfare is for doing PvE sites. If you want PvP, that’s in a different game.

EVE Online faction warfare is for doing PvE sites. If you want PvP, that’s in a different game.

Not sure if the current FW iteration goes into the right direction. After a couple of months break I’m seeing that the former chaotic thunderdome with lots of ship types and playstyles is gone, and replaced by T1 crap and multiboxers farming heavily segregated plexes all day. No T3Ds, no T2, in general much less players roaming.

And you still can’t join casually without leaving your current corp.

No I’ve been noticing that the Frontline system is effectivelly funneling people into frontline systems.
The water was nice in Aldranette today:

Battle involved 46 pilots who lost a total of 703m isk

Not sure where all these people exploded but my fights were nice in any case.

EVE Online Faction Warfare is for doing PvE sites. If you want PvP, that’s in a different game.

Not sure if the current FW iteration goes into the right direction. After a couple of months break I’m seeing that the former chaotic thunderdome with lots of ship types and playstyles is gone, and replaced by T1 crap and multiboxers farming heavily segregated plexes all day. No T3Ds, no T2, in general much less players roaming.

Some of that T1 crap is the most fun stuff out there. If people needed bling to land kills that’s more of a them problem. I will say though, that I do really miss flying the Vengeance, because it was such a wholesome thicc boi.
That said, I share you concern about the general rise in multiboxer activity, and the negative effect it is having on the area. I point the blame to the existence of sites that pay out in full to 5 people.

I point the blame to the existence of sites that pay out in full to 5 people.

CCP could get rid of these sites and just as many of them will keep on warping 10 Merlins/Kestrels/etc to each site in timer-completion order.

All it changes is the ISK/h numbers, not the fundamental behavior.

Agreed. CCP knows that risk versus reward is a thing. It’s gotta be hard to balance. There’s no way to make everyone happy.

No, you really don’t.

You’re all about making Eve safer and reducing the opportunity for PVP. You’re not going to gaslight me by pretending fake agreement.

The real solution to this is to expand CONCORD legal PVP. This means highsec wardencs more freely accessible, wardeccing fellow militia, wardeccing beyond “holding corps”. You are against all this, so don’t pretend you “agree” there’s a problem and then claim it’s “hard” to balance when it is easy, readily available, and is something you’re actively undermining.

You are against all this

No I’m not. Where did you get that idea? Because I’m against HS ganking? They’re hardly the same thing. Is this your main? I thought your KB would look…more “extensive”. You sure talk a good game…

Where did you get that idea? Because I’m against HS ganking? They’re hardly the same thing.

Ganking is entirely an emergent mechanic out of CONCORD “PVP legality” which is also tied to wardecs. You being against HS ganking means you want PVP illegality throughout high sec. Ergo, no wardecs in High Sec.

If you were truly against HS ganking and for wardecs you would simply say “I want to turn every ganking group into a wardec group, enable free (ISK wise & freedom-wise) wardecs on anyone in any corporation, NPC or otherwise” which I sincerely doubt you’d believe.

Is this your main? I thought your KB would look…more “extensive ”.

That’s funny, I thought yours would look more… “extensive”.

Well, I am also against highsec ganking, but more in the sense that I would loiter and ECM gankers, rather than crying on forums. It’s just that all the dank PVP (and having to haul all of my ■■■■ out of Agoze) has kept me extremely busy.

yesterday i took a beating in FW
i will not make excuses ,a beating is a beating , iim a bad player lol , but i will say that i was getting more and more TILTED

NEW FW SUCK , i would like to apologise for saying that it was noice , to any people i gave that impression , my deeply sentiments , it was NOT my intention to fool you …

edit:
you know what i was writing the full wall of text but the words are not coming , I’m kinda tired
i will say that the frontline system makes 4 ish systems the only used in the warzone 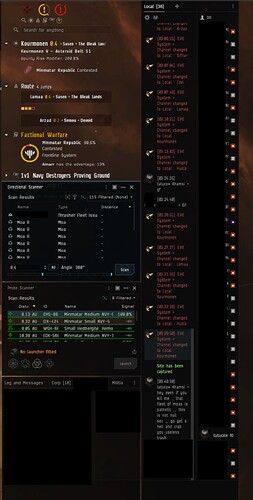