My short story if you have a short attention span: I’ve played Eve actively, with no breaks in time played, since June 2003. That’s 19 years of continuous Eve experience which no any other candidate can match. Also, my Eve experience hasn’t just been in wormholes, High, Low, or Null sec space as many others running have limited themselves to. In fact, I have always had at least one active character in each of the three security spaces throughout the years and play each almost every day. Working from home has its Eve playtime advantages, you should give it a try if you can. Before Eve Online I played Privateer, then Earth & Beyond till it sadly came to its termination. My whole life has been basically spaceships games.

My knowledge base is pretty much the entire Eve game and not limited to just one or two areas like a majority of the other candidates. Even after 19 years in Eve I still mine, build ships and modules, do incursions, mission, pvp, do exploration, and pve in all areas of security space all the time. I am most likely the only person running for CSM that can say that they have done almost everything there is to do in eve at least once and have done it not just for one day, or one month but have done it for years through all the changes put in place by CCP for each portion of the game. I think that is the sort of Eve knowledge and player you want on the CSM to get your point across and know what he is talking about from experiences in the game. I have experienced basically every facet of eve mechanics over and over first hand with all its changes.

I’m not some Eve big bloc voted in candidate looking out for only his group of people in a certain section of space or trying to achieve space-fame for myself. Also, I am not just running for CSM to get my free eve subscription to all my characters in game, like apparently is the case with at least one of the candidates running for CSM this year is and publicly stated on twitch that is why he is running for CSM. I actually could care less if I get a free account or not after paying for 19 years for game.

I also have been in the longest active and running 1-man Alliances and corporations in game. I’ve been in wars with that Alliance and my alt characters are also in groups of people in all over eve. These qualities alone obviously set me apart from other candidates. I’ve never looked for fame in the game and I have made many new friends in the game. Getting elected isn’t just some play to make me feel good about myself or some ego trip to justify all the subscription dollars I’ve spent over 19 years. I genuinely just want to share with CCP what you and I feel could help the game the most at this time.

I don’t stream on Twitch, I don’t have a film crew and writers helping me make a CSM election commercial and I have never been banned from any game. I don’t think one or all of those items makes you a good CSM member. One, of several things you can expect from me though is I want to help new players in game so that they stay and play. One of the many things I do in game to facilitate this is randomly drop cans of free stuff on gates just for my own entertainment and yours because everyone wants free isk and maybe it keeps a player playing for just one more day that you can shoot at that extra day he plays.

So why am I applying for the CSM you ask. Well, I’ve grown tired of all the same candidates getting in and as far as I see they haven’t done much in all the years of the CSM’s to really make the game much better. In fact, starting over 4 years ago, I asked in many channels and discords that CCP limit terms of candidates. I don’t know if I can take credit for that move by CCP to finally do it but it should have happened a long time ago. I think many, if not all, of the previous candidates felt that they could actually push their agenda items forward on the table when as we know CCP already has a plan in place for the future. CCP is mainly looking for ways to improve the ideas they have in development process. I think any person or candidate should help them in that capacity as much as possible so the game idea they have doesn’t end tragically for the community. Also, at same time, I feel we together should ask to add things to their game timeline that we feel should be addressed as soon on the timeline as possible.
As from what you can expect from me. Well I could just copy and paste all the previous things said here on the forums from all the other candidates running because they all say the same thing which is, they will work for you to make the game better and listen to you. Of course, I would do that also but that is just common sense if you’re on the CSM but you don’t have to be on the CSM to make the game better than it is. You can post your game change thoughts and complaints on social media for people and CCP to see or help someone out in chat asking for help running a mission. I’m not here just trying to help new players stay I also want to help all of us 19-year vets enjoy the game more also.
VOTE STYXX-ENTEEN (17)
o7 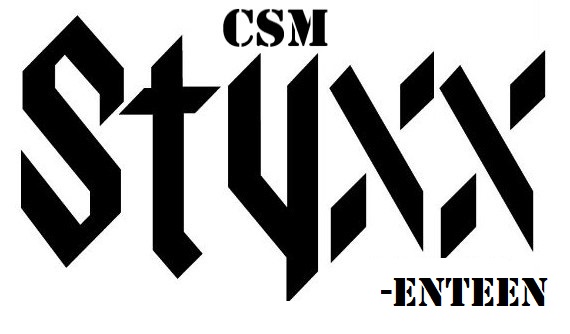 I’m impressed - I didn’t think you’d be able to pull this off, but you managed to increase the number of veiled negative references to me this year, but you did, even misinterpreting an obvious joke. Good work.

Perhaps there’s a role carrying the coffee and cookie tray then.

You do realize most eve players have at least 3 alts, right? Thanks for your vote now.

If you are running on an alt, and hiding your main, you are automatically disqualified.

Please come back when you are ready to run as your main.

This is my main obviously, all i was saying was a person can have alts like me with 13k kills on one. Thanks for your vote and knowing the CSM rules for running though. Gold star awarded to you from my campaign staff. Hugs and o7

Uh, sorry, your killboard disqualifies you.

Nice to see a candidate one can actually identify with, think i might actually vote this time.

Thanks for your vote(s) and welcome to my marketing team. I appreciate your confidence in me.

Thanks to all of you that voted for me. We made it to Round 8 with all your help. I find that a great accomplishment for our group here. I feel it’s an honor to get so many first-place votes from all of you. See you all in game and say hi when you see me.