I’m back after succesfully failing to get onto CSM16! More on why it was successful later.
Here is last years thread.

TL;DR: I produce drugs, used to smuggle them and I’m a wormholer btw.

You might have seen me at fanfest, as the second most handsome man with cat-ears. Maybe you mentioned Boosters or Gas Harvesting on Reddit or EVE Discords and got a comment from me. Most of you probably never heard of me, so here some introduction:

My EVE story started in 2012 with me not being subbed the whole time. After starting with the usual Highsec stuff I dabbled with null renters and then joined wormhole space in 2015. While in the booster producing Corps Es and Whizz, where I really delved into the rabbit hole of Gas Harvesting and Booster Production.

In the end it was the lockdowns bringing me back to the game fulltime. I knew that I wanted to live in wormholes again, so I joined the german corp CheeseParty, formerly (now inactive) a corp in P A R A B E L L U M.
During this time I started producing boosters myself, which was very easy as I still had most of the needed assets stashed away, and knew how to get the rest of it.

Now I’m flying with A Fools Kingdom, part of TURBOFEED OR GLORY. Our alliance executor Mark Resurrectus is also running (we got in contact while we both ran for CSM 16) and if you want wormholer representation on the CSM, I highly suggest you put him on the top of your ballot.

What do you even know more than other candidates?

After boring you with my life story I’m going to keep this short:
I know everything there is to know about Gas Harvesting, as I spent time doing it in every part of New Eden. Whether
I know everything there is to know about Booster Production and use this to make most my ISK. Before CCP nuked the smuggler gameplay by making Boosters illegal I was pretty knowledgeable in that profession, but unfortunately that is a thing of the past, with nothing to replace it.

I’m an experienced explorer having lived in highclass and lowclass, even in the forbidden C4 space for some time. I may not be a veteran capital wormhole FC but when it comes to how changes influence J-Space, I know when there is stuff that has an impact (wanted or unwanted) like with the Industrial Cores on Orcas and Porpoises enabling easy highclass rolling.

I don’t claim to be an expert about most other areas of the game, but I’ve done almost everything apart from Faction warfare at least for some time, and lived in every part of space.

Why would I subject myself to this?

I totally understand that the job of being in CSM isn’t very thankful, and has turned some who were on it very bitter. Honestly I’d rather be the one turned bitter, then some of the actual content creators (FCs, Alliance leaders) running for CSM.
I do think that I would be able to handle it better than other people, as during my real life job I had a lot of experience of working with an application older than EVE, plagued with legacy coding, problems with old UI and almost no possibility to invest developers into fixing stuff. I learned to accept that reality, but still had to talk to the users of this application about how we try to change some things where it was possible.

What happens when I get in

Circling back to part about why I find my run for CSM16 to still have been successful:
My CSM16 campaign topics I talked about during interviews:

If all it takes is to make my campaign topics public, discuss with other candidates and the community team to listen in order to make it it into the game, I don’t care if I get voted in. Even when not in CSM myself, I was able to support the CSM (namely Kenneth Feld) by providing knowledge and analysis of the Gas Harvesting changes.

If I actually do get in, I want to actually be publicly available for you pilots to contact me with issues, and get as much feedback from CSM back to the players, similar to how Brisc Rubal and Kenneth Feld are doing it.
For the topics I want to bring into CSM this year, check out the third comment in this thread. 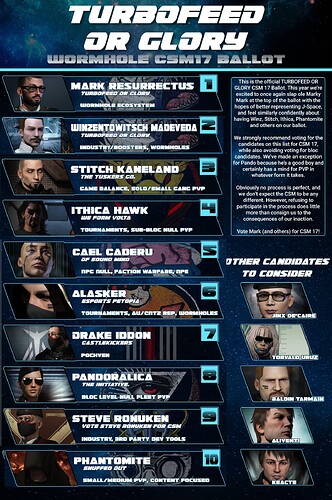 With capital production finally starting to happen after reduction in needed materials, we saw Mykoserocin prices hike up, as that is the variant only found somewhat reliable in Lowsec and even there it’s not very available compared to the theoretical infinite Cytoserocin in Nullsec.
While Fullerenes are easy to find in Wormholes, I do want to push for a system where people living in wormholes can deploy structure spawning more sites in a system, which in turn could act as something to fight over besides a full blown eviction.

While looking at the usage of gas especially in capital production, you see large amounts of Mykoserocin, few Fullerenes and almost no Cytoserocin. This does make sense if you want to severely reduce the stability of capital production, as it heavily relies on the most unreliable type of Gas Harvesting. I’d like that to be a little bit more stable.

SOV-Nullsec was already promised the possiblity to choose extra resource spawns in their systems and I think this one way to make sure that you not only have a way to make the availability of Gas types more stable, but also to provide “intermediate” targets with structures linked to this, that have much shorter timers and give the attackers a good payout.

The last thing EVE needs is more players being in seperate bubbles where they don’t interact with anyone. This also counts for new sites with limits on how many can enter. Being able to cheese this by warping in alts to be safe, is just bad game design.

We were promised a discount for pilots with multiple accounts, and more content being released by investing the subscriptions into more devs for the game. We waited for fanfest and didn’t get much apart form some nice promises.
Especially wormhole space is hit by people simply not wanting to pay for alts, further reducing numbers of activity we see in our chains.

If you have any topics you want to see represented in CSM, feel free to message me about it here or directly through discord: Leon/Winzent#1878

99% german Stream with Walldeck, Erstschlag and Surprise guest Pando, about the IBIS project and the CSM election:

Voting started, and you’ll be able to vote with every omega account older than 60 days until 11:00 UTC on 14 June.

Here is how I’ll vote: 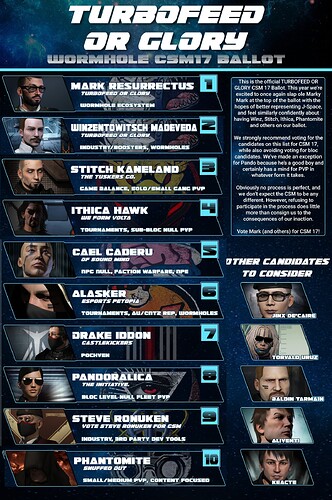 Some of the reccomendations I got:

It’s unlikely for there to be a world where Mark does not get in and Winzent does. Regardless, he’s another good wormhole pick and is someone with more of a hand in industry than Mark.
Winzent is also a fellow cat ears enjoyer. A vote for him is a vote for cat ears and difficult-to-pronounce names.

Feels a little harsh to put him so low in the odds, but his chances are not realistic alongside Mark Resurrectus. A very interesting guy, but isn’t as outgoing or uncontroversial as Mark. Wormholers should focus their mass on a single candidate or else risk rolling themselves out.

Cat ears, when? Winzen is a shameless gas huffer.